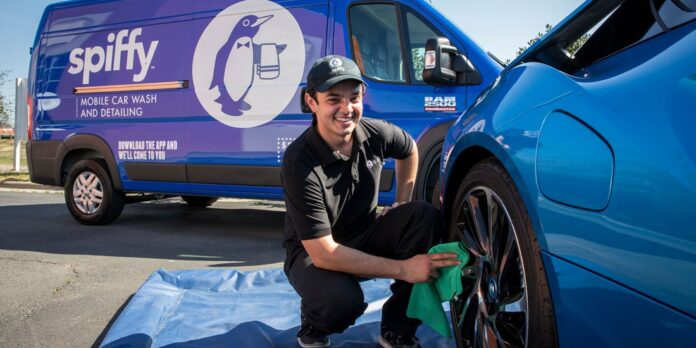 Having someone wash or detail your Lexus while you are hard at work, which is the business model for Durham-based Spiffy, seems like a can’t-miss as on-demand services inspired by the likes of Uber gain popularity. But the learning curve can be protracted: California-based rivals Wype and Cherry, which offered similar scheduling apps, are defunct. Meanwhile, last year Spiffy’s revenues gained 150%, and a $7.5 million capital raise enables further growth.

Co-founders Scot Wingo and Karl Murphy, who don’t disclose other financial details, say customer service has set Spiffy apart. Wype, Cherry and Squeegy, a Los Angeles-based company that was faltering when acquired by Spiffy last year, excelled at technology but weren’t adept at keeping customers happy. No matter how great a company’s app and marketing, if service is subpar, “all you do is fail faster,” Murphy says.

Inspired by Uber’s business model, the duo formed Spiffy in 2014, testing the waters in Raleigh. With prices ranging from $19
to $299, the service clicked with customers. Spiffy now also operates in Atlanta, Charlotte, Dallas and Los Angeles and is looking to add another 20 or 30 markets “as fast as we can,” Wingo says.

A key to Spiffy’s growth is goodwill with office parks and large employers, because most customers want their cars cleaned while at work rather than at home. Spiffy now has approvals from more than 300 of these businesses, who like the company’s environmentally friendly approach. Spiffy moves a client’s vehicle to a proprietary mat, then uses about half as much water as a traditional car wash. It collects the water and cleaning chemicals, then hauls them away.

From the outset, the 130-employee company hired its own staff rather than using independent contractors. “[Customers] don’t necessarily care if it’s a W-2 or a 1099 employee,” Wingo says. “But we felt to deliver what the customer wants, having employees was the way to go.”

Spiffy’s founders are “a really strong 1-2 punch,” says Jason Caplain, general partner at Bull City Venture Partners in Durham, which led the fundraising last year. Wingo is best known as co-founder of e-commerce company ChannelAdvisor, where he remains executive chairman. Murphy started Carolina Auto Spa, a car-wash business with locations in Apex and Cary. Today, he and Wingo jointly own that business.

Spiffy’s service impresses Ben Wright, director of operations at Cary-based Canopy Lawn Care. Besides quality washes for Canopy’s vehicles, Spiffy has been spot on with scheduling, he says.

While ordering a car wash with an app is a new wrinkle, “mobile detailing has been around almost as long as cars have been driven,” says Carl Howard, chief operating officer of Charlotte-based Autobell Car Wash, the nation’s fourth-largest car-wash company. He views Spiffy as a competitor for higher-income customers, though Autobell has a broader approach with washes selling for as little as $5.

To expand, Spiffy has started offering $69 oil changes and invested in India-based Refreshed Car Care. “If these guys are the Spiffy of India,” Wingo says, “we want to get to know them and have a relationship sooner rather than later.”