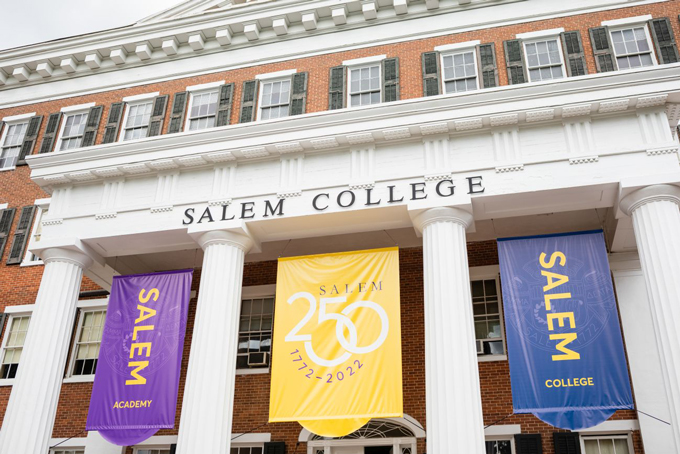 The concept that girls and women should undertake a vigorous education wasn’t a prevailing theme in colonial America when Salem Academy and College opened in 1772. UNC Chapel Hill, the first public university in the U.S., admitted students in 1795 but didn’t enroll women in a regular academic year until 1897.

However, the fundamental tenet of empowering women still drives the Winston-Salem institution as it celebrates its 250th anniversary.

President Summer Johnson McGee, who joined Salem last July, is aiming to revitalize the women’s college and boarding school for high school girls by changing its focus to an exclusive emphasis on health-related fields and academic and co-curricular experiences concentrating on science, technology, engineering and math.

Like many small private colleges, Salem faces a battle for survival as U.S. high school graduations plateau. Declining enrollment over the past decade pressured its $20 million annual budget, which put its accreditation at risk in 2018.

The turmoil prompted Salem’s board of trustees to reassess the school’s prospects and launch a $10 million capital campaign that raised $14 million. That success prompted the accreditation agency to remove Salem from financial probation in 2019.

Trustees concluded that bold changes were needed at the college, leading to McGee’s hiring. Her work as founding dean of the School of Health Sciences at the University of New Haven in 2018 resulted in more than a dozen new in-person and virtual academic programs at the private, 7,000-student Connecticut campus.

“The opportunity to reimagine a 250-year-old institution and to set it up on a course for success was just an irresistible opportunity,” McGee says. “That’s how I ended up here at
Salem. I have really enjoyed getting to become part of a really great community.”

Studies show many aspiring college students are interested in health-related careers, McGee says. Indeed, about 40% of Salem’s student body was already pursuing a degree in a science, technology or health-related major.

Salem College has a goal of boosting its current enrollment of about 500 students to 850 over the next three years, McGee says. The college received about 1,200 applications for the 2022-23 academic year. In May 2017, Salem reported enrollment of 1,200. Salem Academy, a boarding and day school, which also operates on the 47-acre campus near downtown Winston-Salem, has about 60 to 80 students. Salem’s endowment is about $70 million.

“We really thought about what was the way that Salem graduates could make the biggest impact in the world,” McGee says. “So, thinking about making communities healthier, making the lives of individuals better, making that change — that’s what Salem has always been about.”

When Salem hired McGee, search committee chair Elizabeth Baird called her “uniquely qualified to help lead Salem Academy and College into the next 250 years,” citing her success at New Haven as evidence of an ability to transform the N.C. school. Baird is a Salem alumna who also chairs the school’s board of trustees and is director of the North Carolina Aquarium at Pine Knoll Shores.

McGee earned a bachelor’s degrees in philosophy and bioethics from Indiana University Bloomington in her home state in 2003, then received a Ph.D. in bioethics and health policy at Johns Hopkins University’s Bloomberg School of Public Health in 2006. She worked at Loyola University in Chicago for six years before moving to New Haven in 2013.

Leading Salem offers an added bonus of promoting single-sex education, which McGee says has long been one of her passions.

Surviving for 250 years reflects a steadfast commitment by students, faculty, staff and alumni “who have continued to support Salem through thick and through thin all of these years,” McGee says. “There are increasingly fewer and fewer institutions in the country that really are wholly dedicated to creating that empowering, learning and leadership development environment for women.” ■