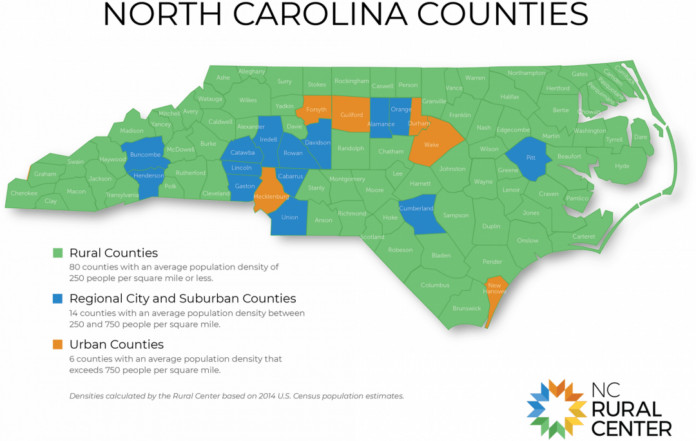 More than 500,000 people in North Carolina have filed jobless claims since the outbreak of the coronavirus pandemic, marking one of the largest surges in the nation, according to various employment studies. Those job losses include 9,500 positions at N.C. companies that filed Worker Adjustment and Retraining Notification notices since February with the N.C. Department of Commerce, reflecting furloughs or permanent plant closures.

Most of the WARN filings have occurred in the state’s major metropolitan areas. Mecklenburg County companies have reported 2,541 lost jobs, while Guilford and Wake County employers have indicated reductions of 1,472 and 1,260, respectively.

But those numbers aren’t representative of where the impact will be truly felt in the state, says Patrick Woodie, president of the N.C. Rural Center, which works to develop and improve the quality of the North Carolina’s 80 rural counties.

Rural counties and small-town communities are often the forgotten victims of major crises. There are also fewer jobs in rural parts of the state than 20 years ago, because many areas of North Carolina haven’t fully recovered from the past two recessions, Woodie says. When tragedy strikes, these communities are often hit deeper and face slower recoveries.

Several rural counties already face higher unemployment rates than urban North Carolina, and it’s often seasonal due to the heavy reliance on the tourism and hospitality industry in coastal and mountain communities. Woodie says the pandemic is going to blunt sales and occupancy tax collections, which will hurt local governments.

To combat the impending effects, the N.C. Rural Center has teamed up with seven Community Development Financial Institutions across the state to start the North Carolina Rapid Recovery Loan Program. The $15 million bridge loan program is being funded by the Golden LEAF Foundation and is intended to quickly fill the gaps for small businesses until Payment Protection Program assistance arrives. State lawmakers are considering adding another $25 million to the fund.

Woodie says the initial $15 million program was quickly oversubscribed after businesses in 98 counties filed 3,400 applications, requesting $122 million in assistance with an average loan request of $36,000. “The volume is unlike anything we’ve ever seen before with our disaster relief because virtually every business in all 100 counties is impacted,” he says.

Woodie says it’s positive that state leaders are discussing the right way to slowly reopen the economy. “They’re having the right conversations about how do we minimize the length of time, of debt, the losses that we’re incurring, and trying to get back to normal to whatever the new normal is.”

Share
Facebook
Twitter
Linkedin
Email
Previous article
N.C. among states with largest increases in unemployment due to COVID-19
Next article
UNC System board puts off Vidant’s board nominees