It’s something every business owner wishes for: foresight into the economy for the upcoming year. Industry experts from across the state gathered to discuss what to expect in the future, most with a positive outlook.

Appeared as as sponsored section in the February 2020 issue 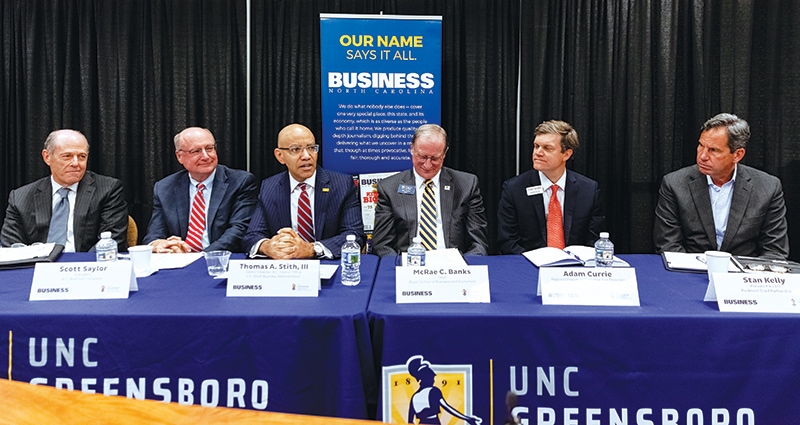 What direction do you see the economy moving in 2020?

STITH: We feel very strong about the economy this year. The Tax Cuts and Jobs Act of 2017 has provided an environment for small businesses to thrive, reducing their tax liability, providing incentives — such as opportunity zones to invest in areas that typically haven’t received private investment — and reducing tax rates for C corporations to 21% as opposed to 35%.

When you look at small businesses in North Carolina, you’re talking about more than 900,000 businesses. Small businesses employ 44% of our working population. That’s about 1.7 million people.

We want to have large industries in our state, but it’s the small business owners that are the backbone of our economy, and they’re thriving now.

The indicator that we look at is our loan volume. Last year, more than $600 million worth of loans were guaranteed by the Small Business Administration through good partners, like First Bank.

Although it was a robust amount of loans, we actually saw a reduction. From an indicator point of view, that’s positive for SBA because that tells us the traditional lending community doesn’t see much need for that guaranteed loan through SBA. We see a vibrant small-business community in North Carolina that is growing and employing our citizens, but we also see the traditional lending community not necessarily having to turn to SBA for a guarantee.

BANKS: One of the things that I would hope that we would do is look beyond 2020 and look toward the middle of the decade and even the latter part of the decade. We need to position ourselves as a state to be successful in the long term.

Many years ago, there were a number of studies done at Harvard University trying to understand how the best organizations were able to be successful, and one of the things that they discovered was that the best executives could look 10, 20, even 30 years out and identify the particular moves and actions that their organization needed to take in order to be successful.

There’s a 10% shortage of workers in North Carolina in the middle-skills markets. Yet markets are moving toward advanced skills. That’s very different, and I’m not sure that we’ve paid enough attention to that in North Carolina. We’re going to have to do that.

KELLY: We have unemployment in the 3.5% to 4% range, which is largely full employment. We’ve really rebounded from where we were a number of years ago. More specifically, in certain sectors, we’re doing quite well.

My point is, it’s a pretty diverse economy with jobs in various sectors.

Is there anything coming up this year that might be a concern?

STITH: Small businesses need to ensure that they’re protecting their technology and systems from cyberattacks. Those bad actors know that there’s very valuable information on those systems, and those are the businesses that can probably least afford that protection but really need to, because it can put them out of business.

BANKS: This really goes back to something that Stan [Kelly] has said twice now: That he wants the businesses in this area to hire as many graduates as we can pump out.

One of the things that we were able to do a couple years ago was recruit one of the top active administrators in the cybersecurity space, Gurpreet Dhillon, to come here [to the Bryan School of Business and Economics] and head our information systems and supply chain management department. We built a cybersecurity program around that.

One of the issues is if there are not enough people educated to provide that cybersecurity assistance to organizations, then no matter how much they want the help, they’re not going to be able to get the help.

That’s part of what we’re trying to do: look at what the needs of businesses are and try to develop the programs in conjunction with local businesses to satisfy those particular needs.

SAYLOR: If we’re not planning deep infrastructure, it can be costly. Not just railroads, but everything. If we’re not investing in that for the next million people who show up here in the next five to eight years, we’re going to be way behind.

One example would be in Raleigh. If the region introduces commuter rail, we have a single-track railroad. We can accommodate commuter rail with the right improvements to the line, but we have five bridges within a 1-mile section of downtown Raleigh. All five bridges have to be double- or triple-tracked in the middle of an urban area. If we’ve got good planners and smart investing, we can outrun that, but it’s going to take some stomach to plan for that kind of structural improvement.

What opportunities do you see coming in 2020 and beyond?

BANKS: A moment ago I mentioned middle skills and advanced skills. I think one of the things that I would like the legislature to pay attention to is moving some of the investment into the advanced skills that are needed.

Middle skills can be addressed pretty readily by community colleges, and I think that’s really important. They’re going to have a role in advanced skills as well, but undergraduate and graduate education in universities will play a bigger role. Most states aren’t paying attention to that right now, and I think that’s an opportunity for us, as a state, to pay attention to that and stake a claim to it. That’s actually going to help our businesses in the state move forward in terms of integrating cutting-edge technologies and taking advantage of things like artificial intelligence, which can help streamline business models.

It’s an opportunity for us here, specifically in the Bryan School. We’ve been trying to work on that in conjunction with businesses and designing new programs.

ROBINSON: In the tax world, there’s some significant opportunities that we are seeing across the country, not just in North Carolina. Specifically, the Tax Cuts and Jobs Act of 2017 instituted
a new tax provision called qualified business income, or QBI. That is a huge deal for our clients.

If you have a qualifying business, QBI allows you to only pay income tax on 80% of the income. We’ve been through this cycle a whole year, and businesses have now adjusted their estimated taxes. It’s all factored in their cash flow, and we’re seeing a significant decline in business-income tax.

We’re dealing with S corporations and LLCs, so the taxes are paid at the individual level. Two years ago, the highest individual tax rate was 39.6% in 2017. In 2018, it dropped to 37%. When you throw in the qualified business-income deduction of 20%, you reduce that 37% down to 29.6%. That’s a huge dollar amount.
We’ve seen a tremendous reduction in income tax from operating business, and that frees up capital and, hopefully, it creates jobs. I think that was the intent of the legislation and, from my perspective, it works.

CURRIE: I think there’s a huge opportunity in the Triad right now, and it’s a unique opportunity — I’ll call it somewhat of a second Renaissance potential — where the Triad was beat down for decades with tobacco, with furniture, with textiles. You’re seeing so many new small businesses start here.

When you compare it to the two bigger urban areas — Charlotte and Raleigh — the cost, the labor force, all of those things are very conducive to businesses here right now. You’re just starting to see some of that grow.

SAYLOR: I think Adam [Currie] is right. There’s proof of that. Most of the projects that we see in capital-intensive, large industries are going to be foreign investment-type companies. An example is Egger Wood Products
in Lexington. That project is under construction, and I think it’s almost finished. It’s going to create 800 jobs. It’s rail served. It took a $6 million rail investment by us and Norfolk Southern to do that part of it. They’re also in the wood business, so they’re going to source timber from North Carolina growers.

That’s a huge team to bring them here. It’s an Austrian company that’s never had a United States manufacturing operation, and they’re thrilled to be here.

Freight traffic overall has been down this year. But to put that in context, it’s been red-hot for about seven years. So it’s not red-hot; it’s just hot. I think we’ll see a little growth, but it does tend to be a leading indicator. I watch that a little bit, so hopefully that doesn’t mean that we’re heading to a downturn.

Have you noticed slowdowns in any industries?

CURRIE: I’d describe it as hot, but not white-hot. Certainly people are looking for capital; they’re investing. I don’t talk to many folks that are, in any way, down about the economic environment in North Carolina right now.

I think it was mentioned earlier that between the rural and more urban markets, there’s a little bit of the “haves” and “have nots” right now. But we’re in a lot of small rural markets across the state, and even those markets are holding their own.

ROBINSON: Well, it depends on the industry. Specifically, in the construction industry, we’re finding that they have record backlogs, and that’s fairly consistent across the industry. They see that it’s going to be increasing, although they are struggling, again, with the labor issue.

The lending environment is very conducive for private development, especially in industrial expansion, multifamily and senior-living projects. The financing for that is much easier to handle today; therefore, you’re seeing a lot more projects. When the interest rates are lower, the feasibility becomes a lot better for the projects’ success.

Long term, how do you see the urban-rural divide being affected by the economy?

KELLY: People regularly will travel 30 miles to a job. Winston-Salem to Greensboro, Greensboro to High Point — you name it. Some people will travel up to 60 miles for a job.

So, when a large company considers moving to the Greensboro-Randolph Megasite or Chatham County, they’re looking at data for 15 miles, 30 miles, 60 miles.
My view is that you’re going to have centers of gravity, like the Triad, and then the outlying markets will benefit. Now, if you’re not within 60 miles of an urban center, that’s another story. But this state is orienting itself around metropolitan clusters and 30 and 60 miles out for job opportunities.

STITH: I think our rural communities are starting to boom. If you go farther east and you look at a Rocky Mount and Kinston, they have realized they’re not going to be Charlotte or Raleigh, so they’re building upon niche industries.

The key is not only to have the proper infrastructure and support… but our rural communities are realizing the benefit of defining what their niche is in the market and building upon that.

SAYLOR: Another problem we have is encroachments in the right-of-way. This is kind of in the weeds, but it is a challenge. If we’re not protecting our corridors, whether they be utility corridors or railroad corridors — highways included — we have no way to get the reach for those areas.

Having said that, I think it’s time to think of the rural topic differently. I’m not sure that those areas necessarily want the same things that folks want in urban areas. The challenge is the flight of the people. It’s the flight to other jobs out of those regions, but when you read about closures of hospitals and closures of schools, there’s something awry. I wish I had the answer. I do think that part of that solution is that you’ve got to find industries that are suitable for those areas. They’ve got to want to go there.