On Leigh Cockram’s first day on the job as Rockingham County’s director of economic development and tourism in February 2019, she learned the county planned a presentation the next day to a manufacturer considering adding 100 jobs in Reidsville.

The prospect — code-named Project Piedmont — was a big opportunity for a community that has suffered several economic body blows over the past generation. Textile and tobacco jobs, once a mainstay, disappeared as one plant after another closed. 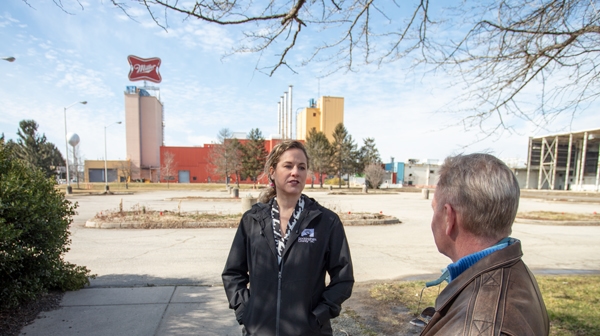 “Then we got another punch in the gut when MillerCoors decided to close,” says County Manager Lance Metzler. He was referring to the 2016 Eden brewery shutdown that eliminated more than 500 jobs. “We’re like, ‘We need to do something.’”

So that presentation to the interested manufacturer was important during Cockram’s first week on the job. She was experienced in economic development but was new to North Carolina. “She immediately reached out to me,” says Tony Copeland, the N.C. Department of Commerce secretary at the time. (Gov. Roy Cooper appointed Machelle Sanders to the role in February.)

Cockram took charge of the pitch. “I remember staying late that night and redoing the entire PowerPoint into a format and a look that I just thought worked,” Cockram says.

The effort went well. “You would have never thought it was her first day or second day,” says Metzler, who is Cockram’s boss. “She was very well prepared.”

Three months later, Pella Windows said it would invest nearly $20 million in a plant with 124 employees. It was the first win for Cockram and part of a strong reversal in Rockingham County’s fortunes in the last few years. Including Pella, 10 companies announced new investments and added jobs in the county in 2019 and 2020.

Those companies include diaper manufacturer Ontex, which created more than 400 jobs, and pet food company Nestle Purina, which in September disclosed a $450 million investment at the former MillerCoors site. The pet food plant will eventually create about 300 jobs at wages averaging $42,000 a year, compared with the county’s average wage of about $35,000 a year.

Purina’s announcement was the largest economic development investment in the county’s history, based on dollars pledged. In all, the investments from those 10 companies total more than $600 million and will create almost 1,200 jobs.

More private-sector jobs should help raise Rockingham’s income levels, which have trailed the state averages. Median household income of about $43,600 a year is about 25% less than the statewide level of $54,600.

Historically, the rural county sitting between Greensboro and Martinsville, Va., found success in textiles and tobacco. Chicago department-store magnate Marshall Field established Fieldcrest in the northern part of the county when he bought seven area mills in 1911. The business grew to employ about 3,000 people in the county before the U.S. textile industry’s collapse in the ’80s and ’90s.

In the county’s southern region in Reidsville, tobacco was the dominant employer. James Duke’s American Tobacco bought the Penn family’s Reidsville plant in 1911 and employed about 1,000 people until the mid-1990s, when staffing was drastically reduced. Manufacturing dwindled through a series of ownership changes. The last jobs disappeared in early 2020 when ITG Brands moved operations to 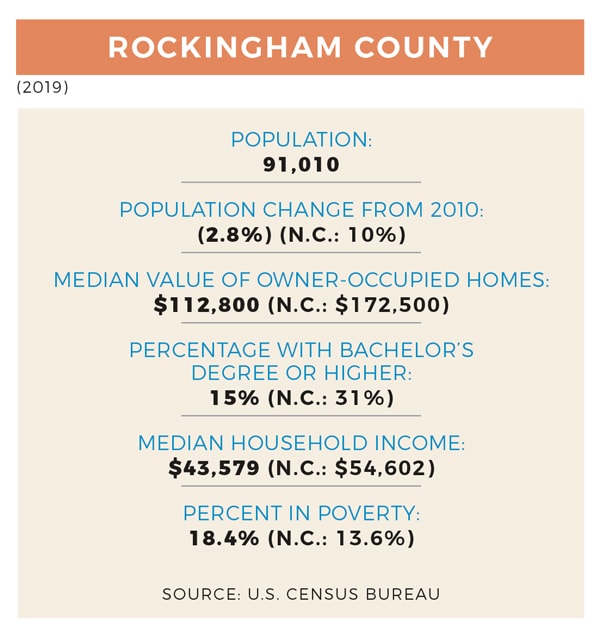 Upgraded transportation options are spurring growth, however. Highway construction has made for easier access to Piedmont Triad International Airport and the Triad’s Interstate 40/85 corridor, setting the stage for expansions.

Rockingham officials say the county has ingredients that N.C. boosters tout when recruiting companies: a workforce with manufacturing experience, a community college, and land and facilities appropriate for large plants and distribution centers.

Belgium-based Ontex chose South Rockingham Corporate Park, a project by Greensboro developer Roy Carroll that is adjacent to U.S. 220 and Interstate 73 and 20 minutes from the region’s main airport. The park has also benefited from the county’s expansion of water and sewer utilities along U.S. 220.

Development in Virgina should bolster Rockingham County. Just across the state line along U.S. 220 is another industrial park, Commonwealth Crossing Business Centre, that is adding tenants. Suppliers or other businesses that move to the area can support future tenants there, Metzler says.

Rockingham County also touts its rivers and opportunities for outdoor activities. Metzler points to a $400 million Caesars Entertainment casino and resort in Danville, Va. — 25 miles from both Eden and Reidsville — that will boost tourism spending in the region. The casino’s groundbreaking is planned later this year with a likely opening in 2023.

It took the county two tries to lure Cockram south from her Virginia home. Metzler first approached her in 2014, when she was the director of business development and strategic initiatives at Danville’s Institute for Advanced Learning and Research. Before that she’d held economic development posts and private-sector jobs in southern Virginia, including two years as founding director of the Southern Virginia Regional Alliance, a regional partnership.

Cockram was also busy with her own sportswear company and wasn’t looking for a new job. When the Rockingham economic developer position came open again in late 2018, Metzler again trekked north to Virginia. This time, his pitch was more successful.

Her company had revenue in the six figures, but the work of packing and shipping orders, updating social media, and more was wearing on her.

“We had a great, very candid conversation around what are the strengths, the weaknesses [of the county],” Cockram says. She did some research and “truly realized that ‘Yeah, I’m interested, because you’re sitting on the cusp of an explosion.’”

Cockram, 40, still lives in Martinsville with her husband and two children. Her daily commute to Reidsville is 35 to 40 minutes — less than the 50-minute drive to Danville she made for her previous job. She has closed her former business. 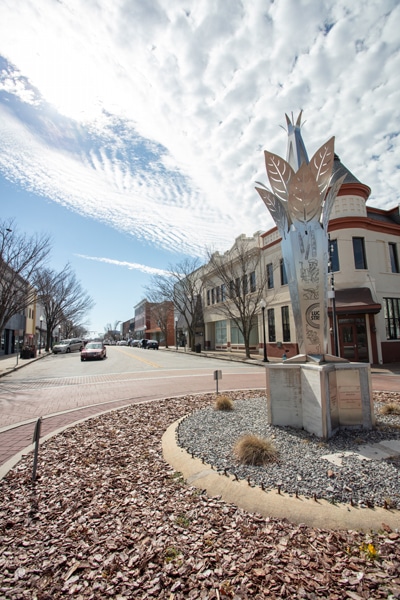 Colleagues say she has the key attributes needed in economic development: a knack for managing relationships with local government stakeholders and other local officials and an ability to share a compelling vision with prospective employers. She’s also direct.

“She’s very, very smart, really, really bright and really energetic, and about as blunt a person as you’ll ever meet in your life,” says Michael Dougherty, the longtime director of economic development for Eden, in the northern part of the county. “She doesn’t pull any punches at all.”

“She can be very persistent when identifying an area that you and I may look at and think, ‘It’s not that great of a place probably to grow,’” he says. “After she goes through a presentation or goes through convincing you or trying to convince you it would be a good location, then, you’ll be like, ‘You know, maybe that is a good idea.’”

Her vision for Rockingham County is for more residential, industrial and retail development while retaining its rural character.

“Even five years from now, I think it will look different as you drive north or south,” she says. “I think the landscape will change, but I think it will change in a managed-growth pattern so we never really lose that kind of rural, laid-back identity.”

To make that vision a reality, there is still work to be done.

“What will be our new challenge is the lack of product that will suit the majority of the activity that we’re seeing,” Cockram says. “The lack of building spaces that are modern, if you will, with higher ceiling heights … or shovel-ready industrial sites.” ■