North Carolina will benefit from a movement of business from larger, denser urban areas in the U.S. as the economy recovers from the coronavirus pandemic, said Tom Barkin, president of the Richmond Federal Reserve Bank, during a video conference today.

“I think you will see a lot more migration,” he said in the meeting hosted by the Charlotte Regional Business Alliance. “Denser urban environments are going to have to rethink their decisions.” 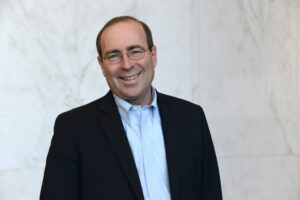 A dispersion of business and commerce into smaller cities would be a healthy change, Barkin said. “I have a hard time taking a subway to work in an infection environment,” he said, alluding to the challenges faced by New York and other cities that rely on mass transit for transportation.

Equipping smaller U.S. cities and towns to be more attractive may require significant investments in better broadband technology and health care, he added. Many rural hospitals are facing dire financial straits because of the coronavirus impact, which forced suspension of many elective surgeries and primary-care visits, he noted.

He was particularly bullish on the Queen City’s future, noting its strength in banking at a time when the financial sector is well capitalized. “Charlotte has been an unbelievably powerful competitor in corporate migration,” he said to the delight of conference host Janet LaBar, CEO of the business alliance.

Barkin spent 30 years with the McKinsey & Co. consulting firm before taking the Fed post in January 2018. He noted his business career provides a different perspective from the economics and research backgrounds of many of his peers.

The Fed official provided a bleak view of the economy, citing record unemployment levels that are understated, because they don’t include people who have voluntarily left the workforce. He said a “V-shaped,” fast-rebounding recovery is unlikely, that the downturn is likely to last more than a few months, and that blue-collar workers are bearing most of the current economic pain.

“It’s notoriously hard to be optimistic when you are at the depths of a crisis. But I’m a big believer in American science” and the ability to find medical cures.

Beyond finding a vaccine to address the COVID-19 virus, Barkin urged public health and political leaders to provide clarity on “my ability to interact in commerce without putting myself, my family or my colleagues at risk. … I think that would be unbelievably powerful. The more that is spoken, the better.”

While praising monetary and fiscal programs instituted by Congress and the Fed to stabilize the economy, Barkin noted the limitations of such efforts. “We’ve got to bring physical commerce back. If we don’t, no amount of money will be sufficient.”

After speaking to a half-dozen hospital executives weekly, Barkin says he knows the industry is “under unbelievable stress. … Hospital chains are having hundreds of millions of dollars of losses” because of coronavirus-related costs and lost revenue from other services. A return to elective surgeries and federal support will help hospitals rebound, he said, but added, “I’m most worried about the rural markets.”

Barkin is also worried about the ability of colleges and universities to operate effectively until a vaccine is available. “I think there are real challenges to the model that colleges have built over the last several decades,” he said. “A lot of smaller, lesser-known colleges were already at risk. … If the virus changes our lives fundamentally, I think a lot of colleges will be at risk.”

Despite the current gloom, Barkin noted his age and experience have given him “enough perspective to not overreact to the conversations we are having.”  He recalled the fear of a banking system collapse in 2008 and concerns that airline travel would be impossible after the Sept. 11, 2001, terrorist attacks. “I’m able to see there’s another side to this.”