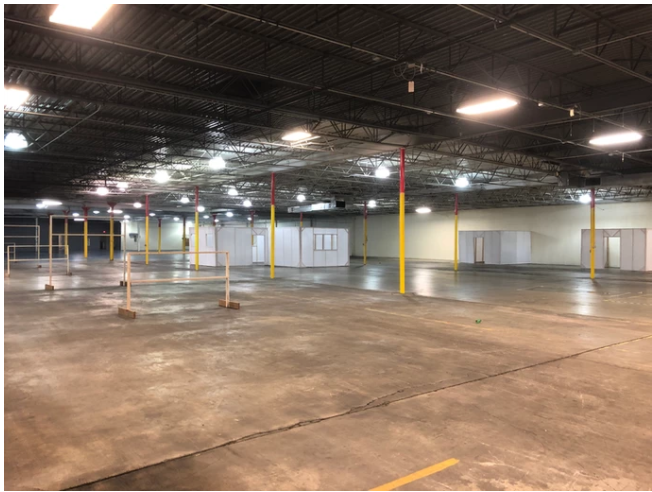 Recently, I visited Red Springs, a small town in Robeson County, to meet with James Freeman.  Freeman runs a five-year-old, 11-employee company called the Emerging Technology Institute. He has taken an empty factory and turned it into a military and tech innovation hub. I wanted to share his story because it shows how an entrepreneur with a good idea and the ability to build relationships can get things done in rural counties. 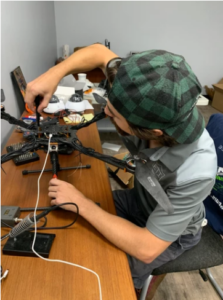 ETI has a 156,000-square-foot building on 55 acres. Soldiers from Fort Bragg, one of the largest military installations in the world, drive down 28 miles to test new technologies and ideas. Defense contractors demonstrate new equipment for them. What ETI has is flexibility. Military bases like Fort Bragg have tight restrictions on ranges, air space and spectrum.

His list of customers and partners is impressive – high-tech contractors, elite military commands and university researchers. A couple of weeks ago there was a demonstration of drones that can fly and land in rugged terrain by themselves, and carry blood to the battlefield, for example. That’s why, among the folks in attendance, was a high-ranking medical officer from the U.S. Army Special Operations Command (USASOC), which has a big presence in Fayetteville.

USASOC — the Army’s Special Forces — is the largest component of the U.S. Special Operations Command, based outside Tampa. SOCOM oversees the military’s special operations commands and it has a big event in June at ETI.

Vendors will demonstrate technology to help special operators see the enemy, particularly in buildings, and to communicate without being detected. To demonstrate this kind of technology, you need to move around on all-terrain vehicles, use radio spectrum and air space and have an indoor range simulating a building with walls. You need to be away from the limits on military bases in urban areas. You need a location like ETI on NC 211. Robeson, on the South Carolina border, is one of North Carolina’s poorest counties, but it is also its largest in land area. Having a facility in the middle of all that wide-openness can be an advantage for the right business.

But you had to have that right business in mind. The first time Freeman saw the old factory, he wasn’t thinking of an innovation hub. His brother-in-law, Bryan Graham, director of parks and recreation in nearby Scotland County, was looking for a place to put on a Halloween-type haunted house. Freeman was then working at his alma mater, the University of North Carolina at Pembroke, as head of a small business entrepreneurship program. His brother-in-law figured Freeman might have connections with the town of Red Springs, which owned the property.

Why Red Springs owned this site is a familiar story. The textile industry left Robeson and other rural Southern counties. The plant at one point employed 400 people in cut-and-sew operations.  As the U.S. industry struggled against foreign competition, the factory went through multiple owners. The last textile company left in 1995, donating the site to the town. Another company arrived in 2010 with a distribution operation, but left in 2015.

While at nearby Pembroke, Freeman helped small business startups navigate Fort Bragg because the Army is a big customer for many products and services. One day, a Special Ops contact at Bragg asked Freeman to meet with a soldier with a problem. It was a fateful meeting.

“He took me to a hangar space where I’d never been before,” recalls Freeman. “We went to another room where soldiers were learning to work with the flight controls of the drones, showing me how they see and stuff. And all of a sudden there were more soldiers populating this room. They were looking for air space.” It’s hard to fly drones on military installations with lots of planes and helicopters.

A couple of days later, after church, his brother-in-law took Freeman to Red Springs to look at the empty factory. Freeman took a picture and sent it to the Special Forces soldier. This was just the kind of place they needed, lots of land with not much around it. Freeman knew what this old factory could be.

Freeman gave notice at Pembroke, put together a business plan, found investors and persuaded town commissioners to give him a lease-purchase deal.

Freeman, who just turned 40, turned out to be very good at building relationships in the defense innovation ecosystem in North Carolina. That includes military commands and organizations at the universities and advocacy organizations that are trying to boost the state’s share of Department of Defense research and development dollars.

“In the special operations commands, he’s been able to build trust,” says Kathie Sidner, the UNC System’s director of defense & military partnerships. “That’s the one and only currency.”

One of his mentors is Nick Justice, a retired major general now at N.C. State University. Justice used to run the Aberdeen Proving Ground in Maryland, a key Army R&D site, so he is familiar with the challenges of finding places to try out new technology and tactics.

“It’s the deconflicting radio frequencies. It’s deconflicting air space and activities on adjacent training areas,” says Justice. “I might be wanting to practice with a weapon that would interfere with something going on on an adjacent range. Or I may not be able to get the air space because I’ve got a major jump going on. 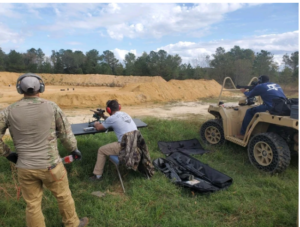 “Everybody went down there with a business plan.  We’re going to turn this into a textile mill. James goes down there going, “I got this great space. What can we do with it? What would you do with it?”  And he starts knocking on doors and all of a sudden he’s got creative ideas coming at him.”

ETI has been selected to work with N.C. State’s Industry Expansion Solutions office as one of the partners on a new federal grant aimed at boosting the national security innovation base in the state. One big focus is advanced textile manufacturing for a variety of military applications. If they’re going to do something with textiles down in Red Springs, it’ll be with high-tech, sensor-embedded wearables for warfighters. Stuff we don’t want made in China.

“They’re our research and testing facility for the grant down there in Red Springs, in that large facility,” says Michael Mullins, a retired lieutenant colonel who runs the IES’s Defense Industry Diversification Initiative.

What has also impressed folks are the relationships he has built with the K-12 schools, and with UNC Pembroke, Fayetteville State and Robeson Community College. This helps technology companies develop a workforce, and also shows students in a poor county the possibilities. As Herman Locklear, the county’s career and technical education director told The Robesonian last month: “You can’t be what you don’t see.”

What students are seeing is how virtual reality looks, how video games are built, how drones fly, and how cybersecurity works. They are interacting with technology companies, large and small, in ETI’s classrooms and on its ranges.

“Yes, I’m a business person. I’m an entrepreneur, and I’ve got responsibilities,” says Freeman. “But I’m also a citizen of this community. I’ve got a 10, 8 and eight-month-old. And my wife’s from here. She’s never lived anywhere else. My mother-in-law’s five minutes down the road from me.

“So, I’ve got to figure out everything I can do in my power to help empower or influence the community I live in, and I think this business is doing it.”

There is an informal skunk works feel to the place, somewhere warfighters at the tip of the unconventional spear meet informally and away from the flagpole with visiting scientists and engineers. ETI folks are working on R&D projects on benches covered with drone components and in unfancy rooms with developers on laptops.

When I visited ETI, a Carnegie Mellon drone spin-off company, Near Earth Autonomy, was rehearsing for a demonstration in a couple weeks. Freeman drove me out to a clearing in a Polaris ATV. (Polaris has a big SOCOM project and is doing some vehicle modifications at ETI.) We rolled up to where technicians were running an autonomous drone through its paces, taking off and landing by itself, looking down with sensors at artificial boulders simulating difficult terrain. Nearby, a beach-type shade tent held folks watching on laptops as data from the drone showed it pondering where it wouldn’t tip over.

The question I had come to Red Springs to answer was:  What were robotics engineers from Pittsburgh doing here, 500 miles from home?  One answer came from Spencer Spiker, the company’s chief test pilot: “It’s hard to find places to fly things like this.”

But the better answer is: Because James Freeman made ETI happen, with help. Which is how it is supposed to work in our state’s defense innovation ecosystem.