Farmers have an almost pristine public image. Insurance companies, well, that’s a different story. But Larry Wooten has helped figure out how to marry the two businesses in an effective way, while making a big mark on the state.

The president of the North Carolina Farm Bureau Federation is retiring in December after 20 years as the go-to leader of the agriculture industry, the state’s biggest economic sector. When national political leaders interested in farm issues visit, Wooten is inevitably on the must-see list, says Bruce Thompson, a Raleigh attorney and lobbyist at Parker Poe Adams & Bernstein LLC. He’s introduced Bill and Hillary Clinton and other Democratic Party leaders to the Raleigh-based trade association leader.

Wooten’s clout equals N.C. Agriculture Comssioner Steve Troxler, adds Brad Crone, a veteran Raleigh political consultant. “I’ve never viewed him as partisan. He’s just pro-farmer,” says Thompson, whose family has farmed in Franklin County for generations. “If you went back over the last 20 years, I’m sure you’d find that virtually every congressman would have good things to say about him, no matter their party.”

In a lesser-known role, Wooten has also been a key player at N.C. Farm Bureau Mutual Insurance Group, whose size dwarfs its public image. While day-to-day operations are led by Executive Vice President Steve Carroll, a 40-year industry veteran, Wooten heads the company’s 12-person board. The duo may be the least-known billion-dollar financial executives in the state.

The company’s breadth is unique, with 187 offices in North Carolina’s 100 counties. Each county has a nonprofit Farm Bureau board made up of eight to 16 volunteer members. The federation counts more than 577,000 member families who pay $25 a year for a membership that provides discounts on Ford vehicles, eyewear and other goods and services. (The fee hasn’t changed since 1982.) When family members are included, the company’s reach tops 1 million people — or at least 10% of the state’s population, Wooten notes. 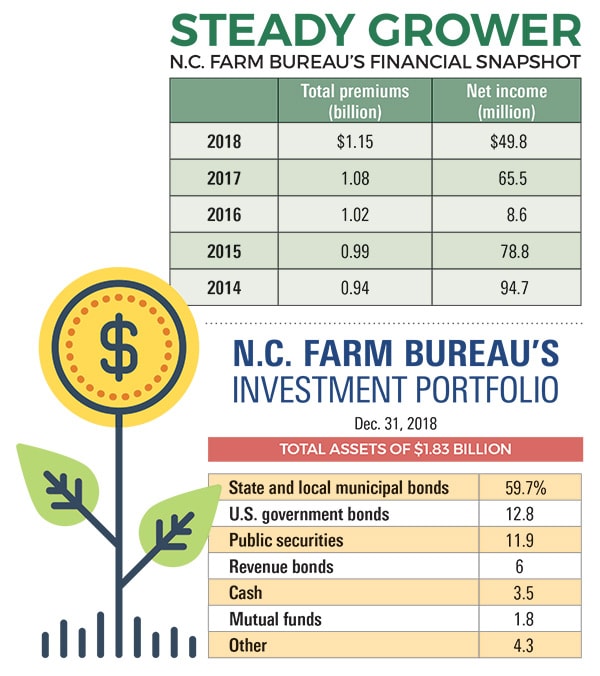 Despite its name, fewer than 10% of those members are working farmers, he says. Some city-dwelling members may have had family ties to agriculture before automation and consolidation slashed the number of people raising crops and livestock. Many others just favor the rates charged for Farm Bureau insurance.

The organization has a staff of 54 people in Raleigh, including a dozen who are registered lobbyists. There are 10 field representatives and about 850 agents who sell Farm Bureau and Blue Cross Blue Shield of North Carolina insurance.

With reserves of more than $1 billion, the insurance company has an “A” financial strength rating from A.M. Best Co., which scrutinizes insurers. That’s one notch below Best’s top rating.

Operating in a single state that is prone to hurricanes, the Farm Bureau doesn’t benefit from the geographic diversity that helps national insurers balance their business. “We have to soak up whatever happens in North Carolina,” Wooten says. That requires the company to buy a large amount of reinsurance to protect from catastrophic risk.

The strategy has proven consistently profitable, though the Farm Bureau’s margins don’t match some of its for-profit peers, and its net income hasn’t grown consistently with its revenue. Nor does it have the marketing firepower that made Geico’s gecko and Progressive’s Flo iconic figures. “We’re not trying to make a boatload of money for stockholders,” Wooten says. “But we know we have to have sufficient reserves, which we do.”

N.C. Farm Bureau is also a partner in Southern Farm Bureau Life Insurance Co., a Jackson, Miss.-based company that ranks among the 30 largest U.S. life-insurers. Farm Bureaus in 11 states collectively own the organization, which had stockholders equity of $2.5 billion as of 2017, according to the company’s most recent annual report. It doesn’t disclose financial data on a state-by-state basis.

Wooten views his role as offering harmonious representation for farmers to state and federal politicians. It’s no easy chore given that the interests of big agriculture companies and farm families can diverge.

In many Farm Belt states, some smaller farmers have historically organized through the 200,000-member National Farmers Union. The group, which has little influence in North Carolina, often takes more progressive positions on trade, climate change and contract farming that contrast with the typically conservative, pro-business stands of the 6 million-member American Farm Bureau Federation.

“From time to time, it’s like any family, and there is a little discord between our members, but our goal is to come out with a united voice that is good for farmers and good for rural communities,” Wooten says. “We work with all of the farm groups in the state rather than just specializing in tobacco or pork or poultry.”

While his job involves working with the big agribusinesses such as Sanderson Farms Inc., Smithfield Foods Inc. and others, Wooten says his core mission is “to represent those producing farmers, the men and women who are working out on farms today.”

The slump in many commodity prices, exacerbated by trade battles with China and other nations, is Wooten’s biggest current challenge. Total income of N.C. farmers has declined an alarming 53% over the last three years, including the impact of devastating storms and oversupply in some commodities. “It’s terrible out there right now,” he says.

One curious part of the Farm Bureau structure is that the group’s president must have farming experience. Wooten fits the bill, having farmed full-time from 1973-94 in his native Pender County. (His

brother still farms that land.) During that time, he became active in the Farm Bureau, including a stint as president of his county’s board. In 1994, he became assistant to President W.B. Jenkins, then was elected to his current post five years later.

Amid rapid change in financial services, Farm Bureau’s success stems in part from its old-style practices, Wooten says. No one rates the company as a tech leader, but its customer service wins plaudits. “We use technology, but we don’t do quotes over the internet. We believe that most people need to talk with a qualified professional, especially when they have a claim like a car wreck or a grease fire or a tree on the house. You won’t be on the internet then; you’ll want somebody to show up.”