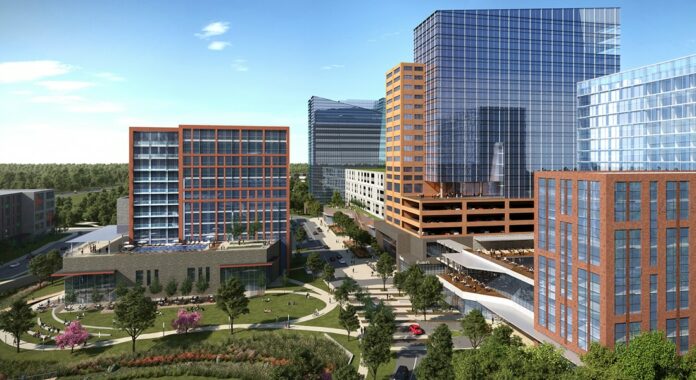 One of the nation’s biggest research campuses is planning to offer a very different look within a couple of years. Not-for-profit Research Triangle Foundation of North Carolina, which manages Research Triangle Park, is partnering with Dallas-based developer KDC to plan 1 million square feet of office space as part of a multiuse urban district called Hub RTP. The development will be on 100 acres next to Interstate 40.

The buildings will be as tall as 300 feet, marking the first high-rise structures in RTP. While no tenants have been named, construction of the estimated $140 million project is expected to kick off in 2021.

“The project is transformative for Research Triangle Park and will create the integrated mixed-use environment desired by today’s workforce,” said Larry Wilson, division president of KDC, in a press release. The company developed a building at Credit Suisse’s Morrisville complex that opened last year.

“This is the long-anticipated opportunity to retool RTP,” said Scott Levitan, president and CEO of the Research Triangle Foundation. “Today’s companies and workforce are looking for an integrated live, work and play environment. We are creating that kind of energy in the heart of RTP.”