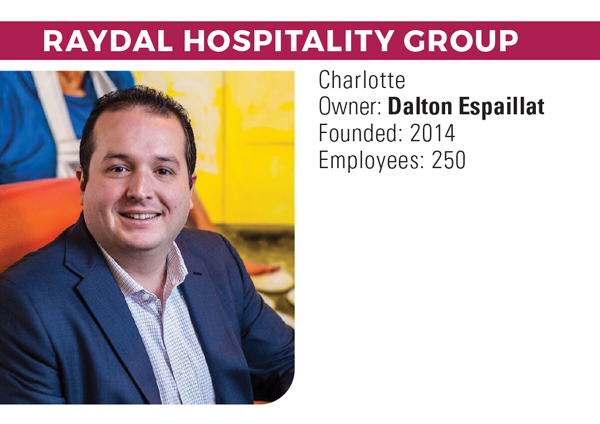 For Dalton Espaillat, 37, community and authenticity are important to his restaurant company’s success. Effectively representing Latin cultures with arepas, burritos, empanadas, tacos and other foods is key.

“What’s unique about us is that we stay very true to our roots and keep things authentic,” Espaillat says. “First, we have a good product, and then we just have great people helping us execute it and helping us grow.”

Espaillat was born in New York and raised in the Dominican Republic before moving to Statesville with his family at 15. He was working as a construction project manager when the last recession prompted him and two friends to buy a struggling Mexican restaurant in east Charlotte as a side gig. He later bought out his partners and turned the restaurant around with aid from his family.

Espaillat views his company as a way of providing a better future for staff members. Sabor’s three franchisees were previously Raydal employees, while other employees are becoming part owners of different locations.

The Charlotte area’s significant growth has helped Raydal expand, but execution is essential, he adds.

“It’s been a combination of a lot of things — being profitable for the bank to provide funding, having the right people to execute and being accepted in the market.”

Plans for 2022 include four or five locations in the Triad area, starting with a Sabor Latin Grill in Winston-Salem. “If we don’t have a Sabor in a town or city near you, more than likely, we are coming that way.”