UNC Chapel Hill’s law school may have a reputation problem: It was ranked 45th in the nation in the most recent survey by U.S. News & World Report, down from 31st in 2015. Law schools at Duke and Wake Forest universities ranked 11th and 32nd, respectively. UNC has made strategic moves to reverse the slide, which Dean Martin Brinkley says is exaggerated. UNC School of Law is No. 22 of the 83 public law schools listed in the U.S. News report, he notes. In a subset of the magazine’s study, UNC annually ranks among the top 20 U.S. law schools according to lawyers and judges — “the audiences who know the truth,” he says. 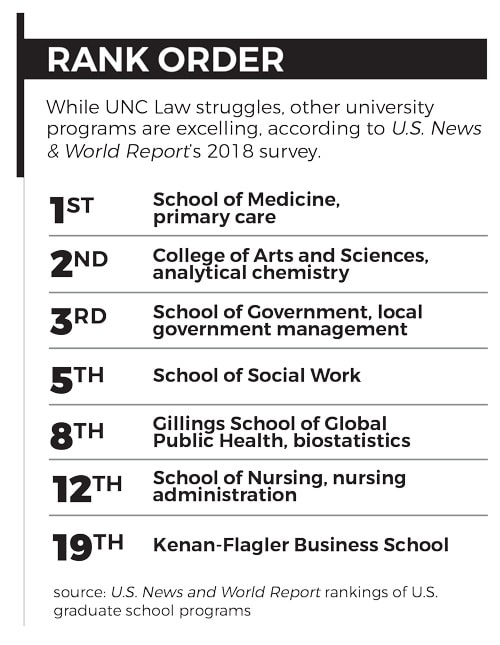 Brinkley and Scott Vaughn, a Charlotte lawyer who is president of the school’s alumni association, add that reduced state support has hurt UNC’s ranking. “Ten years ago, more than 70% of our operating budget came from state dollars. Today it’s less than 40%,” Brinkley says.

Carolina Law has tried to keep tuition low — about $24,000 for in-state and $40,000 out-of-state, versus $62,000 at Duke and $45,000 at Wake Forest — meaning a greater reliance on state funding, Vaughn notes. But other U.S. law schools have enjoyed bigger funding increases, prompting UNC to work harder to attract private dollars, he says.

State Republican lawmakers have looked critically at the law school partly because of controversies involving outspoken faculty member Gene Nichol, the school’s dean from 1999 to 2005; and the UNC Center for Civil Rights, which advocates for poor and minority citizens. The UNC Board of Governors last year stepped over UNC Chapel Hill trustees by ruling that the center could not file lawsuits, following months of debate.

Vaughn, chairman of McGuireWoods LLP’s restructuring and insolvency practice, cites a rosier poll: UNC was 27th in the “Top 50 Go-To Law Schools,” according to law.com’s ranking based on the percentage of 2017 graduates with associate jobs at the largest 100 U.S. firms. Duke ranked seventh, and Wake Forest was 48th.

Carolina Law now enrolls about 645 students, with 52 full-time faculty and about 20 other employees and part-time instructors. A decade ago, the school had about 750 students.
“The quality of a Carolina Law legal education is as strong as it has ever been,” says Brinkley, a partner at Raleigh-based Smith Anderson who in 2015 became the first practicing lawyer to be appointed dean.