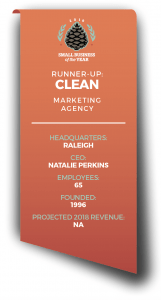 As she helped select Raleigh-based Clean in 2014 as the agency to refresh her company’s brand, Builders Mutual Insurance Co. Senior Marketing Director Jodi Vedelli noticed its “unlimited vacation” policy on the corporate website.

“I thought, ‘Whoa, how does that work? We don’t have that at Builders Mutual,’” she says.

Since then, Vedelli has made friends with agency employees who have taken time off for breaks, including maternity leave, without a set return date. “The Clean people have so much passion for what they do that they are excited to come back to work. And in the meantime, they made sure our account was well-covered.”

A focus on clients and staff has turned Clean into one of the state’s fastest-growing marketing companies. The agency has added 26 clients this year and has expanded its office three times in three years. That success prompted judges to pick Clean as a finalist for Business North Carolina’s Small Business of the Year.

“We actually listen to our clients and listen to their real needs,” President Jeremy Holden says. “Because we have a policy of making folks happy, they tend to stay around.”

In addition to longer term clients such as computing giant Lenovo and forklift maker Hyster Co., Clean has added Cone Health, Credit Suisse, the Raleigh Convention Center and other accounts since 2017. Many involve tourism-related assignments, including the Charlottesville Albemarle Convention & Visitors Bureau in Virginia, which hired the agency after the August 2017 riot sparked by a white-supremacist group’s march.

Clean was pitching the bureau before the weekend riot, so on the following Monday, CEO Natalie Perkins sent a note pledging the agency’s assistance. “Two months later, they called to say, ‘You guys are hired; please come up because we need your help.’”

“It was illustrative of the way we create a brand experience that is moving in real time,” Holden says. “It’s more like a newsroom than a traditional agency.”

Shifting from designing ads to more strategic marketing has been Perkins’ undertaking since joining Clean Design in 2007 as CEO. (“Design” has been dropped.) She had been chief marketing officer at Pittsburgh-based Blattner Brunner and, previously, president of Greensboro-based Trone Advertising. At Trone she met Holden, her future husband, who had a freelance assignment with the agency.

A native of Bournemouth, England, Holden was working for a London agency that had a joint project with Raleigh-based Howard, Merrell & Partners in 1996. CEO Mac Merrell recruited Holden, who wanted a stint in the U.S. In 2000, he jumped to Durham-based McKinney, spending a decade helping market brands including Audi and Sherwin Williams. Amid the recession, he was hired as chief strategy officer at French advertising giant Publicis Kaplan Thaler, based in New York.

Too many delays at LaGuardia Airport and the desire for a noncommuter marriage brought him back to North Carolina in 2013. “I’m a small community guy, and I love the Triangle business community, plus this is an opportunity for Natalie and I to live and work together. It works for us,” he says. 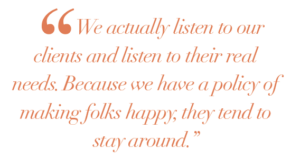 In 2013, Perkins acquired 100% ownership of Clean from co-founder Chris Herndl. The company then had about 20 employees with a client roster including Red Hat and Lenovo. Five years later, staffing has more than tripled as Clean has expanded to provide integrated services including public relations, social media, strategy and video. Digital work makes up about half of annual revenue. In 2015, it joined the Worldwide Partners Inc. network of independent agencies.

The couple doesn’t have any particular growth goal. “We want to grow incrementally where we can do better work for our clients,” Perkins says. “If you go back five years, we were mainly competing with Triangle agencies. Now we really compete with agencies across the Southeast.”

Clean’s main focus is maintaining what Vedelli of Builders Mutual calls an impressive corporate culture. “They know how to value and compensate their employees, which in today’s world is not just what you pay. It’s also providing sparkling bubbly water in the breakroom, or letting folks take a 15-minute walk to get away from the office.”

Perkins says she often tells clients that employees’ interests come first, a shock to some corporate marketers. “We believe that makes our work better and our service better, so the client ultimately benefits. And it inspires our people.”

Some new employees used to late-night work at other agencies look around at 5:30 p.m. and wonder, “Where did the people go?” Perkins says. “It’s a different approach, but everyone really cranks between 9 and 5, and unlike other agencies, no one is sitting around playing pingpong during the day.”

Working late into the night before the next day’s client pitch is “total BS,” Holden says. “You want people to walk into a pitch fresh. … It’s a smart way of operating as opposed to having strange workaholic tendencies.” 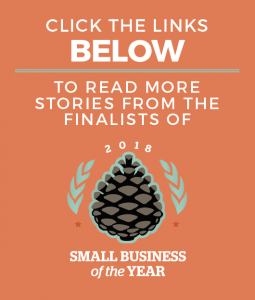