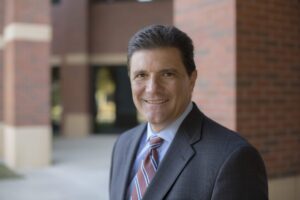 He has worked for the chamber since 2011 after spending the previous 19 years at drug giant GlaxoSmithKline plc. Salamido has an unusual background for the leader of a business group: He holds a master’s in pharmacy administration from the University of Texas.

“Being a pharmacist defined who I am because it’s where I learned about the importance of relationships with patients, putting people first, doing no harm and looking at data before making a decision,” he says. “I’ve tried to keep relationships at the front of everything I do.”

Salamido was a pharmacy student when he first met Ingram, and they’ve stayed in touch ever since. “He’s been incredibly important in my career,” Salamido says.

Salamido named four key priorities for the organization, which he has led on an interim basis since late last year.

• Improving the state’s education systems and improving its talent supply.

That requires the entire education spectrum to work more closely with businesses and communities so that more students have the skills required for success, he says. It’s happening in part because of the My Future NC effort. “I think it’s gonna be disruptive. The pace of change has never been this rapid before in our history.”

•  Retain the state’s reputation for having a very competitive business climate, while working to improve the state’s health care system.

He cites a United Healthcare study ranking the state as 33rd nationally in terms of health care. The subpar ranking reflects the state’s higher-than-average costs and poorer-than-average outcomes, he says. The chamber’s goal is to move North Carolina into the top 10.

He notes that Biltmore Farms and other N.C. employers are having success at reining in health care costs with innovative programs, but they remain the exceptions. “Our cost structures aren’t changing fast enough,” he says.

• Improve North Carolina’s reputation for a favorable legal climate. A U.S. Chamber study, based on responses for top corporate lawyers, rated the state 33rd in 2017, versus seventh in 2015. Salamido blames  “increased variability in how judges were ruling on key issues.”

Interestingly, the chamber isn’t taking a position on Medicaid expansion, which has stalled North Carolina’s budget approval process. The group’s diverse membership is split on the topic, mirroring the standoff between Gov. Roy Cooper — a Democrat who has made it his biggest emphasis — and Republican lawmakers who say expansion is unwarranted.

The state’s polarized political climate underscores the chamber’s emphasis on building trusting relationships with lawmakers, Salamido says. One line in the sand: “We’ll be advocates for people who create jobs.”

Salamido has spent much of his chamber career leading the group’s advocacy at the N.C. General Assembly. Under Ebert’s leadership, the chamber took a more partisan position on issues versus a history of more moderation. For example, the chamber started rating state lawmakers based on their votes on issues deemed critical for businesses, with pro-business Republicans generally dominating the group’s top rankings.