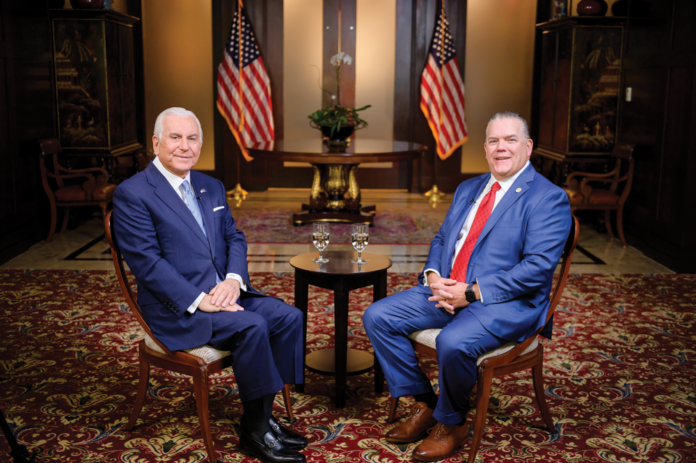 Kirk Bradley is the first participant in Business North Carolina‘s Power List Interview feature, a partnership with High Point University. President Nido Qubein talks with some of the state’s most influential leaders.

Kirk Bradley is CEO of Lee-Moore Capital, a Sanford-based real-estate development company with projects including Governors Club and Triangle Innovation Point. He has a bachelor’s degree from the University of Georgia and a Duke University MBA. The Chapel Hill resident was appointed to the UNC Board of Governors in 2021. 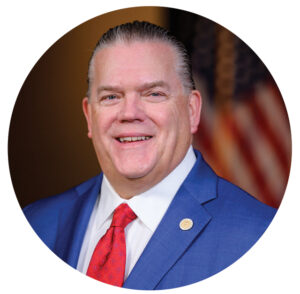 During the interview, Qubein told Bradley, “Any organization or city or community or state, to be truly ready for the future, must have leaders like you who care deeply about it and who invest themselves in every way.”

This story includes excerpts from Bradley’s interview and was lightly edited for clarity.

What are you focused on at your company?

The biggest thing we are working on is Mosaic, which is a gateway to Chatham Park, the 8,500-acre project being built around Pittsboro. We’re doing a 750,000-square-foot mixed-use urban development with buildings that will be one to six stories. It’s going to be the heart of the projects around Chatham Park.

I’m very excited for the next 20 years with what’s happening with our business climate.

Our university and community college system, the military and our expertise in the life sciences. We can be the Silicon Valley of ag tech, power electronics and many other things.

You see that in a microcosm with the plants we’ve gotten, VinFast and Wolfspeed (planned for Chatham County) and the Toyota battery plant (in Randolph County). All of these are terrific future industries for our country and the world. Surprisingly, Sanford is now the global center of excellence for gene therapy manufacturing, which is the future of life sciences. You take all of that and the upside for North Carolina is unlimited.

What must happen for North Carolina to remain prosperous?

It’s a challenge and not going to be easy. But if we can master that, we’ll have a competitive advantage not only in the rest of the United States but the rest of the world.

What else do we need to do to create more jobs and a stronger workforce?

I think certain infrastructure is missing. Funding is an issue. But it’s also a mindset. What are our mission, vision, values? You look at successful enterprises, be it a town or private enterprise, and if they are having success, they have defined their mission, vision and values. We have not quite defined that and pulled it all together as a state.

I think it’s a combination of getting elected leaders as well as private business, industry and other stakeholders and others in the state to have an understanding about what we can do.

I’m very concerned about our rural areas. We have 100 counties; 51 of them lost population. I  want to find things in those counties so that we get the kind of economic development that will [aid] the counties east of I-95 and west of I-77. The cities are always going to do well, but if we have a conscious strategy, we can grow our rural areas as well.

What are your impressions of the UNC System? Is there agreement around the BOG table?

First and foremost, you have to have a great leader. President Hans is terrific. I think Peter was born and spent most of his career preparing, not necessarily because he knew it, to become president of the university system.

The chairman, Randy Ramsey, is doing a great job bringing the other 23 of us on the board together in a structural way that is positive. You can have disagreement, but there needs to be a way to resolve that disagreement over specific issues without having that go all the way through. The board has had some challenges, but most of those have been resolved. So we’re very focused.

At the individual campus level, great chancellors make great universities. Having longevity, strategic planning, these things take a while. Those campuses that get good leaders make a difference. We’ve got some chancellors that are nearing the end of their careers, so the challenge is to bring a leader who is equally as good to keep those campuses moving forward.

How many more people can North Carolina accommodate without losing its appeal?

People need to accept density. People say they don’t want urban sprawl but when you try and do a dense development, they resist that. Elected officials have got to understand that we have to encourage more density, which allows for mass transit. We’re going to have certain elements of rail but in our urban areas, we need to be working on bus mass transit. That makes sense. We’re still too spread out and always will be. I think we can accommodate, who knows, 5 or 10 million more people.

But we need to be mindful if we are going to double in population that we have a design that encourages the kinds of things that do not diminish this great quality of life we have.

Whose job is it to lead in our state?

You’ve got to have great convenors. I think the university can do that. The Piedmont Triad Partnership is a good example. Obviously our chief executive, which is our governor, needs to do that. Our General Assembly leaders, Senator Berger and Speaker Moore, need to be a part of that. It’s up to whoever wants to go forward. We’ve got to convene the right stakeholders and get everybody focused on that same mission, vision and values.

Do you see that type of united effort developing?

I get very frustrated. We’ve had a lot of success but I don’t think our economic development infrastructure is anywhere near where it should be for North Carolina to reach its full potential.

What is your view of the Carolina Core concept?

Carolina Core is a great name. From Winston-Salem to Fayetteville, we’ve got all the things we’ve talked about. Great places to live and work. Great workforce, between the military and our universities, which are well represented. We have the land set aside. To think we have Boom Supersonic on one end and silicon chips on the other and electric vehicles all through that. It was a good name before we knew they were coming and it’s still a good name.

We’ve got to figure out a way to work together. People don’t care where the county line is. We need borders, but most people don’t care if they are in Lee or Chatham County as long as what they need for their company or their families is in the right place.

You’ve shown great interest in environmental issues. Is that unusual for a developer?

To me, they fit together because if you are a good steward of the environment, you are able to sustain the quality of life. It’s a balancing act, and when you are developing, you are grading, you are putting the environment at risk, it’s a risk you have to take, but it’s a calculated risk. I think some of my environmental friends don’t understand that and want to leave everything to nature. But that can’t accommodate the kind of growth that we are going to have. You’re better to be proactive.

What lies ahead for you?

Just trying to make North Carolina a better place and look after my family. We got our first grandchild and I’m excited about that. When I first started at the company, I dropped my keys on the floor and I saw these picture frames under the desk. I pulled them out and my uncle apparently had done this sometime before. It was a quote from Benjamin Franklin that said, “The use of money is the only use there is in having money.” Whether that’s used for a philanthropic intent or economic development or a private enterprise, I enjoy doing that. It’s a passion of mine. That’s what my future is going to be about. ■