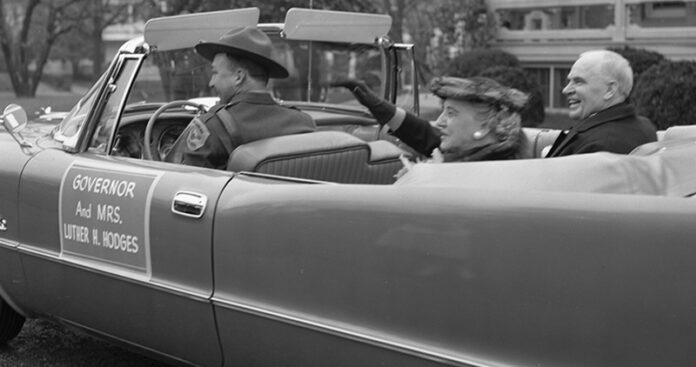 Luther Hodges is best known as the father of Research Triangle Park. He also was a segregationist, albeit a complicated one.

There was a photo in the Raleigh and Charlotte newspapers on Election Day, Nov. 8, 1960, taken the previous evening at a television studio in Manchester, N.H.

It showed Sen. John F. Kennedy seated behind a desk, talking on the phone to his brother and campaign manager, Robert. JFK was preparing for an election eve national broadcast. Seated at Kennedy’s left was his sister, Patricia Lawford. Next to her was North Carolina Gov. Luther Hodges with a trademark white carnation in his lapel.

Six hours earlier, Hodges had been in Raleigh when Robert called saying JFK wanted him on the broadcast.

I went looking for this photo after I read Hodges’ book, Businessman in the Statehouse, which he wrote in 1962 while he was Kennedy’s secretary of commerce. I was reading the book to do some research about Hodges’ crucial role in helping to create Research Triangle Park in the late 1950s.

Why, I wondered, was Hodges rushed up to New Hampshire?

That led me to Karl Campbell, an Appalachian State University professor who has spent the past decade researching a biography of Hodges.

JFK wanted Hodges, who had been a top textile executive for Chicago-based department store Marshall Field’s, to reassure business.

“I think he was trying to get a big-name businessman because they were getting a lot of blowback there at the end of the thing,” Campbell says. “They were afraid that small businessmen all were going to turn against them.”

The Kennedys also wanted a politician who could handle a high-stakes broadcast. Hodges had been appearing on TV since running for lieutenant governor in 1952. “He came across very well on television,” Campbell says.

Hodges is a complex figure. North Carolina was one of the poorest states in the nation when he became governor in 1954, and he set out to change that with a minimum wage, a community college system and economic development, such as RTP, to help recruit companies that paid better than textile mills.

But progressives fault his response to the Supreme Court’s 1954 ruling, Brown vs. Board of Education, that found school segregation unconstitutional.

“And that’s the tragedy and the paradox of Hodges that is key to understanding North Carolina history,” Campbell says.

Many folks, if they think of Hodges at all, remember him as governor before Terry Sanford, who set himself apart from Southern segregationists in his 1961 inaugural speech: “No group of our citizens can be denied the right to participate in the opportunities of first-class citizenship.”

“My argument in the book is going to be that … the last progressive plutocrat to run the state was Luther Hodges.”

He certainly wasn’t born into that role in 1898. Hodges’ father, a Pittsylvania County, Va., tenant farmer, moved the family a few miles across the state line to Spray (now Eden) to work in the textile mills. Hodges worked his way through UNC Chapel Hill, and after graduation, he went back home to work as an assistant to the general manager of the local textile mills.

He was one of the “Young Turks,” Campbell says, trying to modernize the industry with better management practices. In his 20s, he would go to the factories at night to teach mill workers. At 40, he was general manager of Marshall Field’s 29 U.S. and foreign mills. He later moved to New York and was named a corporate vice president.

Hodges retired in 1950 at age 52 and returned to North Carolina. He ran for lieutenant governor two years later, describing himself as a businessman, someone from outside government and politics.

In reality, he had gained considerable experience in government and had political connections. In the 1930s, he was on the State Board of Education and the State Highway Commission. During World War II, he served as an administrator of the Office of Price Administration, where he was in charge of textiles. Wachovia Bank President Robert Hanes, who was in West Germany working on the Marshall Plan (a U.S. program providing aid to western Europe following World War II), persuaded Hodges to help him.

“If you think of all the people that have ever been governor of North Carolina,” Campbell says, “I don’t think anybody was more worldly and sophisticated than Luther Hodges.”

“He knows businessmen on a first-name basis around the world. He knew [Gen. Douglas] MacArthur and [two-time Democratic presidential nominee] Adlai Stevenson. He traveled the world. He had worked in government. … He knew the elite businessmen who ran this state.”

Hodges was not part of the Raleigh legislative and lobbying crowd. But he won with an energetic, statewide campaign. Gov. William B. Umstead of Durham died in November 1954. Hodges suddenly found himself governor.

For Southern governors in the 1950s and 1960s, the response to the civil rights movement and the Brown ruling defined their place in history.

Hodges, in his book, expressed the belief that immediate, state-imposed integration would have led to the demise of the public school system, as white parents pulled out their children and the legislature slashed funding.

In an August 1955 speech, Hodges urged voluntary segregation and denounced the National Association for the Advancement of Colored People — or the NAACP — which was battling to end Jim Crow. It is an astonishing speech when read today.

“My earnest request of you Negro citizens of North Carolina is this: Do not allow any militant and selfish organization to stampede you into refusal to go along with this program I am proposing in the interest of our public schools; take pride in your race by attending your own schools, and make it clear that any among you who refuse to cooperate in this effort to save our public school system are not to be applauded but are to be considered as endangering the education of your children and as denying the integrity of the Negro race by refusing to remain in association with it.”

“It seems to me,” Campbell says, “that a lot of people look at Hodges and they say, ‘Well, he was really a racist, and he was trying to stop and prevent everything.’ That’s what I thought too.

“But when I get into the records, I’m actually shocked. I think there is something to the idea that Hodges was not so much a racist as he was a business manager. And he wanted to manage the crisis. And so you see him over and over again, from ’54 all the way to ’60, all the way through the sit-ins, he’s trying to manage it. That’s what managers do. They manage.

Ten years after the Brown decision, fewer than 2,000 Black students in North Carolina were enrolled in white schools. A variety of local-option laws and strategies made integration difficult, while aiming to avoid direct defiance of the Supreme Court.

By the end of his governorship in 1961, Hodges came across as more moderate than some other Southern governors, which kept him in the mix for a cabinet job in the new Kennedy administration.

Some historians suggest Sanford didn’t want Hodges hanging around Raleigh and he pressed Kennedy to put him to work in Washington, D.C.

The Kennedys knew Hodges well enough to scramble him to Manchester, N.H., on election eve even though he had supported Lyndon Johnson’s candidacy for the 1960 Democratic nomination. When LBJ lost, Hodges campaigned for Kennedy, who felt indebted.

However, they owed Sanford more for backing Kennedy for the nomination. Sanford subsequently met with Robert Kennedy and the late Democratic power broker Bert Bennett. “I want you to appoint Luther Hodges and get him out of my hair.

Move him up to D.C.,” Sanford said, according to Bennett, who Campbell interviewed before his death three years ago.

Hodges is complicated, which is why it has taken Campbell so long to finish a book he thought might take two or three years. “There are two images of Luther Hodges in history. The one is Luther Hodges as the industrial recruiter, the cutting-edge businessman in the Statehouse that brought modern industry and the Research Triangle Park. That’s the Good Luther.

“And then there’s this other Luther Hodges, who is the most effective and sly segregationist. Some people would argue that North Carolina was the most successful at slowing down the integration of the schools. That’s the Bad Luther.

“The way I come out of it is I say two things: He’s the last person of that progressive plutocracy. He’s really at the end of a 60-year thing that goes all the way back to [Gov. Charles B.] Aycock. But at the same time, he’s the transitional governor that is struggling with flaws to try to bring North Carolina into that modern world.”

Campbell says North Carolina leaders today also face a changing world. “Whatever we decided about these social and cultural issues, they can’t be ignored.” And that, Campbell says, is where Hodges “kind of failed.” ■