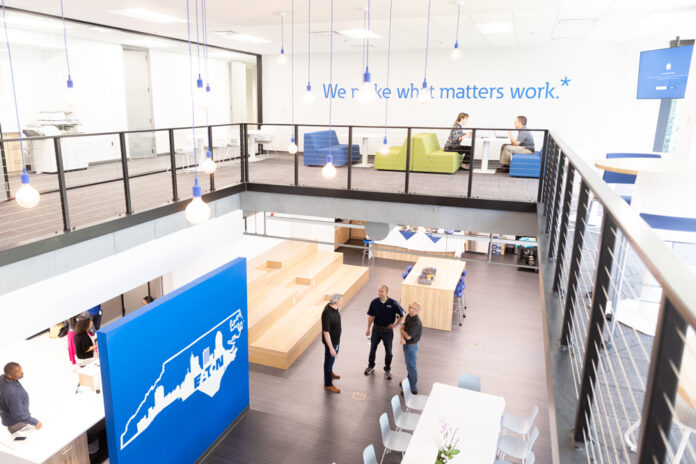 Eaton Corporation is a company with a long history and a new story. Named for one of its founders, Joseph Eaton, it was formed nearly 150 years ago as Torbensen Gear & Axle Co. The name came from Eaton’s partner, Viggo Torbensen, who had the idea for a new kind of truck axle and had a mother willing to financially back the startup. It was a success, one of many in the then-booming manufacturing center of Cleveland, Ohio. After a few years, one in three U.S. trucks had a Torbensen axle, which sounds impressive, but there were fewer than 100,000 trucks in America then hauling freight on bad roads.

The company was born during the transformative rise of the internal combustion engine powering cars and trucks. Its engineering and manufacturing prowess are now deeply embedded in the latest transformation — how electricity is stored and used.

The center for much of Eaton’s work in this transformation is in the Raleigh area, a major manufacturing and engineering site for its critical power and digital infrastructure division. About 650 of Eaton’s 3,000 North Carolina employees work — in newly remodeled offices on Six Forks Road and factories nearby — on Spring Forest Road in Raleigh and in Franklin County to the north.

To understand the significance of Eaton, you have to learn a little about something called an uninterruptible power supply, or UPS.

UPS has gone from being that backup power supply for a few minutes, to being the brains of the new electric grid. Eaton’s Raleigh operations are at the center of innovation, dating back to its 2004 acquisition of Powerware, says James McBryde, engineering director for Critical Power Solutions, and an electrical engineering graduate of N.C. State University.

At minimum, the typical UPS is doing what an UPS has been doing for a long time. “You can think of it as a power conditioner and a power backup system,” he says.  First, the UPS is taking electricity in from the utility and cleaning it up, basically, eliminating the sags and swells in the voltage that can cause problems with equipment. It’s similar to the massive data centers with hundreds and thousands of servers — the modern cloud computing hubs.  Eaton does a lot of UPS business out of Raleigh with the nation’s data centers.

The other part of the UPS is the battery. When the UPS senses a disruption in the power coming into the building, it takes over.

The switch to lithium-ion

In recent years, technology in the UPS has improved due to research and development. It’s also a reflection of what is happening in the power economy. Solar and wind farms are decentralizing the electric grid. Massive investments in electric vehicle production have revolutionized battery technology. This has changed the role and capabilities of the humble UPS, particularly the battery.

Historically, most of Eaton’s UPS products shipped with lead-acid batteries. Recently, the world has moved to lithium-ion batteries and within two years, the market will convert almost entirely, says McBryde.

The investment in car battery technology similar to the Toyota factory that will be built near Greensboro “has driven the cost, the densities and the longevity of lithium batteries to the point where in some of these applications — like uninterruptible power and energy storage — it pencils out from a cost and performance perspective.”

Smaller, better batteries are hugely important for the electric car industry. They are also important for data centers. The new UPS batteries are lasting as long as 10 years and McBryde says 15 years is possible as technology continues to improve. “The ability to deploy these batteries and not having to go in and replace them every three to five years is a huge asset in our markets.”

More than a backup

Another key is determining how much longer an UPS can power a building. How does it move from being a backup during an outage to something more strategic?

“Historically, with lead-acid batteries, they’re so big and bulky, you kind of cap out at maybe 15 minutes before it just becomes so big and onerous, that it’s realistically difficult to deploy a large battery,” McBryde says. “With the cost structure and the size and density of lithium batteries as they’ve advanced… deploying a two-hour battery is not out of the question anymore.”

Increasingly, large manufacturing facilities and commercial buildings are installing solar panels on land or rooftops. That power can go into the UPS, creating an energy storage system on the premises. Eaton’s software can sit next to the battery and is able to make decisions. The UPS helps a company basically become their own electric utility, able to generate, store, buy and sell electricity.

“We’re going from a model where everything was centralized to where everything is distributed,” McBryde says. The existing power system is based on centralized power generation. “The centralized model is now going to a more distributed model, where you will have power generated all over the place . . .,” he says. “The balancing act is really the intelligent piece of it that lays on top of the energy storage, energy generation locally and the energy consumption that’s local already.”

The data center market is growing by around 22% a year, expected to increase by more than $600 billion through 2026, as the world increasingly moves to the cloud, particularly with the rise of remote work turbocharged by the pandemic. “It’s a large portion of our market,” says McBryde. Nearly one in three data centers worldwide is powered by equipment that is designed, manufactured and monitored in the Triangle. That is similar to the market share Eaton had for truck axles a century ago, on a somewhat larger scale.

The growth of data centers is one reason why Eaton acquired Richmond, Va.-based Power Distribution in 2020 and Chicago-based Tripp Lite in 2021. It’s why the company’s Electrical Americas segment — including Raleigh-area operations — accounts for nearly 37% of the company’s $19.6 billion in revenue. 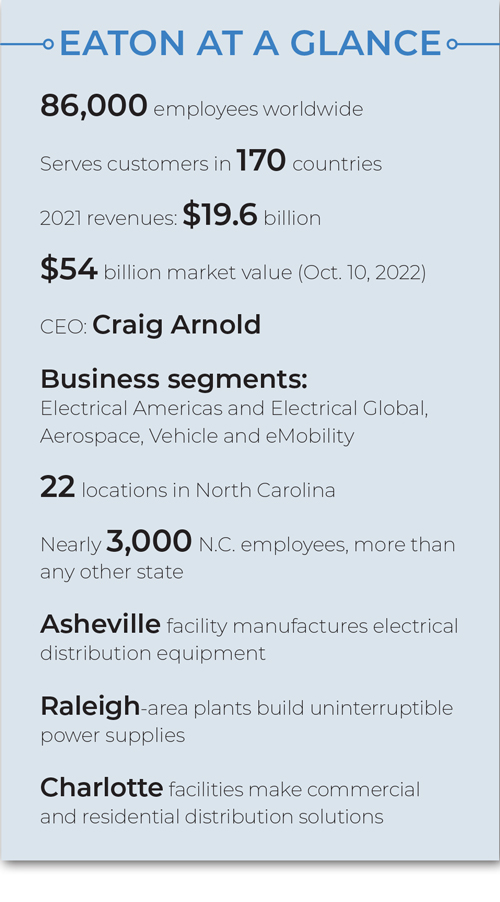 It turns out that large cloud operators like the idea of turning the UPS into a strategic asset, and saving on power. Eaton and Microsoft announced a collaboration in June to use Eaton’s technology in its data centers. The collaboration stemmed from a test at Microsoft’s major data center in Boydton, Va., 90 minutes north of Raleigh.

“They were essentially verifying that the technology worked and the outcome was ultimately a solution that they could deploy in their data centers,” says McBryde.

“In the future, you don’t have a data center or a power plant. It’s something in the middle. A data plant, for example. Where this thing isn’t just a load on the grid, it’s an asset on the grid,” says Sean James, director of energy research at Microsoft.

The need to manage power consumption to avoid huge peak-demand charges will be particularly crucial to make electric vehicle charging practical. If charging stations off the interstates are vulnerable to the whims of peak pricing, they will be very expensive to
run if everyone pulls up when utility loads are the highest.

That is one reason why Eaton is ramping up in the EV charging market, with the charging equipment that sticks into cars and the energy storage hardware and software that will be deployed with it. Some products will be manufactured in the Raleigh area.

Eaton announced in July that it would add more than 170 jobs in the region. It also showed the media its remodeled, 90,000-square-foot Six Forks office building, which it is named “The Hub@Raleigh,” a project undertaken with architecture firm Redline Design Group and commercial real estate firm JLL. Instead of individual assigned offices, there’s more collaboration spaces and a hybrid-model.

Desk toys are a thing at The Hub — ducks, frogs and monkeys. When people get off the elevators, there are giant wall paintings of the toys. The quiet fourth floor has the zen frog. The less quiet fifth floor has the monkey and the conference rooms are designated King Kong, Curious George and Barrel of Monkeys.

“We were trying to drive a shift in just the mindset of our employees,” Butler says. “We were also trying to attract new talent. [The building] was designed like a Southern law office. When people walked into our building, it didn’t look like a tech company.”

One of the great mysteries right now is how to move over the next 10-20 years to a world without gasoline-powered cars and trucks and a grid heavily dependent on solar and wind. We don’t have the infrastructure right now to make the switch. What will be like when everyone in my neighborhood has electric vehicles and they’re trying to charge them at the same time?

As Butler explains, “in a subdivision, you only have a certain number of transformers.“

It’s a much more complicated world now than when Joe and Viggo started making truck axles. But it’s a world that holds a lot of opportunities for their successors at Eaton, who will play a key role in figuring it all out.  ■