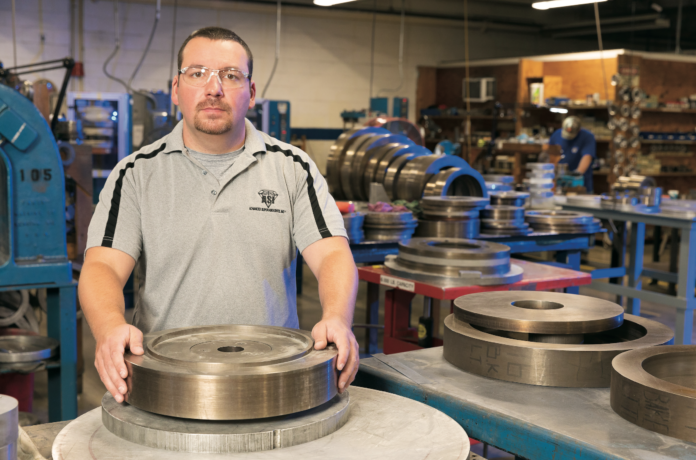 If you want to learn how to export your products or services to foreign countries, call Mike Hubbard and John Loyack of the Economic Development Partnership of North Carolina. They know the ins and outs of exporting and so do their folks.

And it would help to take a class, like the ones EDPNC offers. This is not a casual suggestion. Don’t wing it.

There are reasons to export goods: new markets, jobs for North Carolinians, sales that can keep you going when in a slump.

But it’s complicated. That’s why a lot of small businesses don’t do it. North Carolina exported $33.45 billion in goods last year (up 17.5% from $28.46 in 2020) and an estimated $12 billion in services, according to a recent WISERTrade services estimate. Our state’s GDP is about $660 billion annually; our exports have room to grow.

I talked about this with Hubbard and Loyack, but before I get to them, you should hear from some folks who export goods. Their stories may encourage you. Nobody starts out as an expert.

ASI is a 40-employee company based in the small Madison County town of Mars Hill, north of Asheville. Like many firms, ASI, which makes grinding wheels for a range of industries, got into exporting when it received an order out of the blue. One of ASI’s wheels was included in a shipment that one of its customers sent to a foreign client.

“And they saw the company name and they looked us up, and they said, ‘Hey, we’ve got this wheel and we would like to buy another one,’” recalls Szucs. “And we were like, ‘We don’t know anything about shipping or selling to Canada or Mexico. What the hell do we do?’”

“And so, at the beginning, we made a lot of mistakes. We didn’t know anything about customs compliance. What are HS codes? What are the duties?”

But from this accidental start, ASI began getting serious about exporting. It was a matter of survival.

ASI was founded in 1993 by Szucs’ father, Attila, to supply grinding wheels for the tools used in woodworking, such as in North Carolina’s furniture industry. By the early 2000s, a lot of ASI’s customers were out of business when foreign companies, particularly in China, began to dominate furniture. The recession in 2008-09 compounded the company’s problems.

“We were decimated,” says Szucs. “We lost 30% of our workforce. We were on reduced hours. It was horrific.”

In 2008, ASI decided to expand into aerospace, medical, automotive and energy. “We’re going to get into everything.” And equally important, the company decided to really learn how to export — not only to grow revenues — but also to sell in countries with different business cycles.

One key decision was to tap government expertise. Boosting exports is a high priority in the federal government and among the states. Szucs got help on market research from state trade experts. The Small Business and Technology Development Center, which has offices at UNC System campuses, helped him with an export plan. And he took advantage of the U.S. Commerce Department’s RAISE program, designed for rural exporters trying to figure out where to go next.

A breakthrough came from the State Trade Expansion Program (STEP). Talk to small business exporters and they will mention the federally funded, state-administered STEP, which helps pay for nice websites, foreign trade-show costs and other expenses.

After ASI used a STEP grant to create a Mexican website and social-media marketing program tailored to that country, business exploded. “We did more revenue last year than we did the previous 15 years combined,” says Szucs.“When countries see that you spent the resources to create a website that says ASIWheels.mx — which is not dot.com and a cheap translation — they start taking notice of your company. My distributor down there told me he went from cold calling to getting 10 requests for quotes a week.”

Here are three things Szucs has learned selling in 28 countries:

■ Overseas, American products are respected. His foreign customers will display empty ASI crates “because it says ‘Made in USA.’” U.S. manufacturers are faster and more flexible than many overseas competitors.
■ When he gives a foreign customer 30-day terms, they often pay early. “They want your product. They’re not going to mess with that.”
■ Banks appreciate exporters in large part because they have a more diverse customer base.

South of Asheville, about 40 minutes down Interstate 26 from ASI, Julie Detmering manages exports at Equilibar, a Fletcher-based company that manufactures equipment that regulates the flow and pressure of fluids for a variety of industrial applications.

Fifteen years ago, the 35-employee company was a startup, and Detmering was one of the first employees. Even as a young company, it was developing an international reputation for its custom products, but it had limited knowledge of the documentation required.

Then she went to a class sponsored by the state, and, to put it mildly, it was a revelation.

“I actually called here on my break from that conference and told them to stop what they were doing. Like, ‘Don’t ship anything,’ I said. ‘I think we’re all going to jail.’”

At the conference, Detmering had just learned that ex- porters are supposed to make sure they aren’t sending products to “denied parties.” “Basically it’s embargoed countries, drug traffickers, people that Interpol is looking for. People that you’re not allowed to ship to.”

In other words, you don’t want the FBI showing up want- ing to know why your product was on CNN last night in Iran.

Today, Equilibar gets half its business from exporting, a record level. The company has shipped to 70 countries, including 39 last year.

Countries have their own trade quirks and their own forms. Occasionally, Detmering gets stumped by a customer in some country asking for a form she’s never heard of.

A challenge every small business faces is getting paid. Because the federal government wants to promote exports, businesses can buy insurance for their receivables. “We
have confidence that no matter what happens, we will get 95%,” says Detmering. “The U.S. government goes after that company for the money. That’s been able to help us accept business from a lot of companies that we’re just not sure of.”

Now back to EDPNC’s Mike Hubbard and John Loyack. Hubbard is director of international trade and joined EDPNC in 2014. Loyack is EDPNC’s vice president of global business services.

“It starts with a sit-down with us,” Loyack says. They can help with a market assessment. They can help you develop an export plan. They can make introductions at the Small Business Administration, Ex-Im Bank or the ports.

“We’ll work with them,” says Hubbard, “to figure out which country you should go to.”

There are a lot of potential countries, an astonishing number of markets. Much of what North Carolina exports goes to Canada ($6.54 billion in 2021), Mexico ($4.56 billion) and China ($4.08 billion). But our pharmaceuticals, chemicals, machines and agricultural commodities go everywhere.

One agreement is in North Africa. When I talked with Hubbard and Loyack, I asked what’s a hot export market where North Carolina could do more business? Loyack didn’t hesitate: “Morocco is exactly that.”

“So, the free-trade agreement goes back to 2006, but U.S. manufacturers don’t really take advantage of it. Now, Morocco is considered the Mexico of Europe. There’s massive — and Mike has been there to see these — massive automotive plants.” ■