Maybe you want to start a business. There are books. I would recommend “Creating Trinity: Blueprints of a Real Estate Entrepreneur & Investor” by Gary Chesson, a retired Charlotte real estate developer. 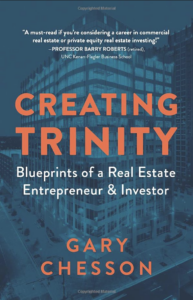 He is co-founder of Charlotte’s Trinity Partners commercial real estate brokerage and the Trinity Capital Advisors investment business. After a nearly 35-year career, he decided to write a book that would help folks do what he did: Move from leasing up someone else’s buildings to acquisition and development.

“That is the question mark most young real estate professionals have,” Chesson told me. “They’ll say, ‘Well, I can learn the brokerage business but, gosh, it sure is intimidating to take that leap and become an investor.’”

This isn’t just a real estate book. It is a book about how to take a leap. It’s a big mystery, how entrepreneurs leave the security of a good living and go out on their own.

Not his first choice

Chesson, who turns 57 this month, grew up in Durham, where his father was in banking and real estate. After graduating from UNC Chapel Hill, Chesson was hired by Wachovia in Charlotte in 1987. The Queen City was his third choice after completing the bank’s training program. He wrote in the book that Charlotte then was “sleepy, with no NFL or NBA teams, and it wasn’t much more than one of the top 50 cities in the U.S., population-wise. Few knew what a decades-long explosion of growth the Southeast as a whole, and Charlotte, in particular, was about to experience.”

Commercial lending is a way to gain analytical skills and see different businesses when considering career options. Chesson knew he didn’t want to spend decades in “stagnant but safe” banking, getting “the standard 2% raises that came at the end of every year whether I was crushing it or not . . .”

“I was networking, meeting as many people as possible,” Chesson wrote. “I was still new to Charlotte, and I wasn’t connected in any meaningful way — but I learned that you don’t have to have connections as long as you’re willing to make connections.”

It was 1990, during an economic downturn. Salaried jobs in commercial real estate were scarce. He ended up working on commission as a tenant’s representative, helping companies get the best terms. After several years, he was recruited by an office and industrial developer for a leasing job, so he moved to the other side of the table, representing building owners. By mid-1997, at age 32, he decided that he wanted to run his own company.

Chesson had never started or led a business, but he approached the challenge by creating a spreadsheet called “Find a Partner.” He wrote: “On this spreadsheet, I listed a couple dozen acquaintances in the Charlotte real estate industry whom I liked, who were very successful, and who I thought might make a good business partner. Shortly thereafter, I started making calls. What I quickly found was that very few people seemed wired to make this leap. The economy was strong, and anyone who was any good in the business was making a lot of money, so they were reluctant to make a change that would almost certainly disrupt their current income.”

One person ready for a change was Peter Conway, another local leasing agent. Conway, a New Orleans native with a UNC Chapel Hill MBA, worked for a company that was selling its Charlotte office tower. He was facing a possible transfer to Tampa. Conway liked Chesson’s plan. Because they both mostly had office leasing experience, Conway suggested they should find a third partner with a different specialty. That led them to David Allen, who had experience with warehouses, investment sales brokerage and capital markets.

Allen passed away in 2014 from cancer at 53. The book’s first chapter is about his last days and how he was as much a brother to Chesson as a business partner during their 16 years together.

The story of Trinity pivots on a meeting in early 1998 with executives of Atlanta-based Bullock, Terrell &  Mannelly. “They were exactly what we hoped to become: a successful startup, competing with industry giants,” Chesson wrote. “The three principals asked the three of us to have dinner with them in Atlanta the following week.” What happened next was crucial:

“As dinner was winding down, Jay Mannelly looked up and said in his slow Southern drawl, ‘I have a question for you boys. Have you decided to be a union or a confederacy?’ The three Charlotteans didn’t understand the question.

“He explained, ‘When we started our business, we were a confederacy. We just shared overhead, and each man was his own profit center. Sometimes we shared real estate commissions, and we were careful to negotiate the fee splits up front — but it was each man for himself. Despite sharing fees, it was inevitable that we got to the end of a transaction and someone would say, ‘I worked on that more than you did; I think we should renegotiate how we share these fees.’ We did that for a year, and then we made a terrific decision that positively shaped our business for the next nine years. We decided to become a union. Any dollar that came in the door would get split three ways, regardless of who sourced it, or who executed the business.”

Most of the Charlotte real estate businesses that Chesson studied were confederacies, basically groups of independent brokers. “But this dinner convinced us that we would need to take the leap and become a true union. This one decision formed the foundation of a successful partnership and the basis of a firm culture that prioritizes teamwork and generosity over selfishness and individual success. It was the best advice we ever received.”

In my conversations with Chesson recently, I asked him about this. “It seems easy in concept,” he says, “but in practice there’ll be some times when it gets tested.”

“One year, David, who really focused on investment sales — which was a highly cyclical business — one year he just whiffed and didn’t produce a single dollar.  And he felt really bad about it, but we said, you know what, you’ll do great next year. And
he did.”

The importance of investing

Another key moment was the decision to be developers and investors, not just brokers, negotiating leases for someone else’s properties. That, said Chesson, “is a young person’s game.”

“We’d seen industry professionals burn out in later years, fatigued by the all-too-common, ‘What have you done for me lately?’ mentality. To get ourselves to a position where we didn’t have to grind in our 50s while competing with 32-year-olds, we were very aware that we needed to become successful players in the investment arena.”

They discovered early on that an experienced partner is valuable. Trinity’s first big investment deal was the acquisition of Perimeter Woods Business Park in north Charlotte. It was owned by the Chicago-based real estate investor TrizecHahn, which hired Trinity in 2000 to lease and manage the office/warehouse properties on the 100-acre parcel. In 2002, TrizecHahn wanted to sell it. Trinity offered to buy it with the plan to develop 60 vacant acres. Chesson, Conway and Allen knew how to value the office/warehouse part of the property, but didn’t know what the vacant 60 acres was worth.

So they brought in John Collett of Charlotte’s Collett & Associates as a joint-venture partner. He loved the project’s potential and helped Trinity raise $7.5 million of equity capital. “Over a span of several years, we learned a massive amount about investing in a single transaction.”

The book provides a window into how money is made. By late 2011, Trinity Capital was raising its third fund and started looking at institutional investors as partners. Typically, these are insurance giants, pension funds and other entities with large pools of cash they need to put to work.

Trinity Capital would find buildings to buy or land to develop. It would find an institutional partner and get a loan for, say, 65% of the project. Of the remaining 35%, the partner would put up 90% and Trinity, 10%. That 10% would come from a fund that Trinity had raised from individuals, including the Trinity principals. The big payoff for Trinity would be carried interest, the financial incentives tied to profits. Up to a certain target of returns, the profits would be split 90% to the institutional investor and 10% to Trinity and its high net-worth fund. Above that target, the split got better for Trinity, up to 20% or 30% of the profits.

“If a project does really well, these carried interest numbers can be substantial, and to state the obvious, when you’re investing in larger projects, the profits are bigger, too.”

Development, wrote Chesson, is something of a science; acquisition is more of an art. The question with buying neglected properties with higher-than-normal vacancy rates or lower-than-market rents is can they be fixed, or are they in bad locations or obsolete? If they can be renovated and re-leased, they can be sold to investors at a profit.

The Trinity partnership had strengths but also weaknesses. Allen “hated confrontation and wasn’t very good at evaluating or hiring talent, but he was by far the savviest and smartest among us.” He was “terrific at handling even the most challenging situations.” Conway’s “always-agreeable demeanor translated into confidence and likeability, and that was appealing to both clients and employees alike.” Chesson brought “the drive.” But he was the most impulsive of the three. “I would shoot first and aim later.”

A leader is seldom the complete package. Surround yourself with folks who can balance you out, Chesson learned.

“When we combined David’s careful, slow and deliberate decision-making with my impulsivity and drive, along with Peter’s ‘always in the middle’ perspective, we usually struck the perfect balance of being thoughtful, deliberate and aggressive.”

Trinity was also fortunate to be in hot markets, aided by significant international investment in the past decade. “Over the last 20 years, Charlotte and Raleigh-Durham have turned from tertiary markets into top 15 markets nationally… Our North Carolina markets will likely never be considered gateway cities for investment purposes, but when growth and trajectories are considered, we’re definitely at the top of everyone’s lists.”

The book Chesson wrote is a textbook in disguise. It reads as a narrative about three guys who found each other in Charlotte and built something from nothing but their smarts, grit and nerve.

After the book was finished, his dad gave a copy to some university professors.  They liked it but suggested Chesson take out  “all the personal stuff” so it could be turned into a course.

“And I said I’m not interested because it’s the personal side of it that makes it relatable to the reader.” ■