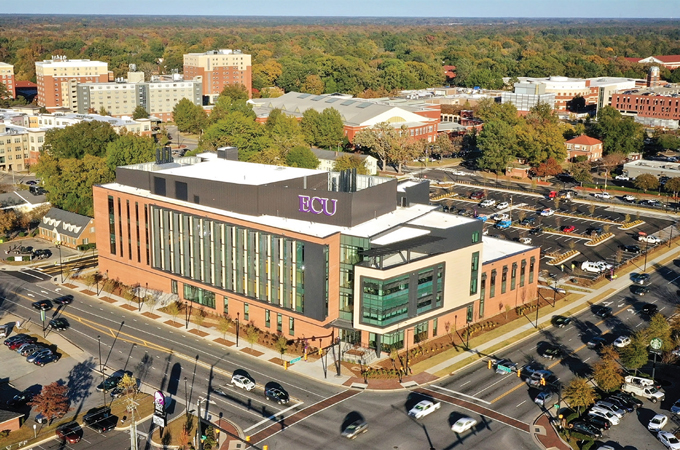 A year ago this month, Philip Rogers became chancellor of East Carolina University, which went against the narrative in Eastern North Carolina of folks going to the city and not coming back.

Rogers, who turns 39 in March, grew up in Greenville and went to Wake Forest University. He came back in his 20s as an ECU policy analyst, then chief of staff for Chancellor Steve Ballard. He later became a top executive of the American Council on Education in Washington, D.C., for nearly eight years.

Before describing his current mission, he talks about why he returned. His roots are deep in Greenville. His great-grandmother graduated from East Carolina Teachers Training School in the early 1900s. His mother is a graduate. His wife, Rebekah Rogers, earned two of her three degrees from ECU. His father has been the pastor at Greenville’s Oakmont Baptist Church since 1986.

When Rogers left Greenville in 2013 for the ACE job, it was to learn how higher education works, then return. “I could then bring it back to Eastern North Carolina and apply [it] in my own hometown, in my own region.”

He wants ECU to focus on “being the national model for student success, on serving the public, and on advancing regional transformation.”

“Student success is the hottest topic in higher education right now. And we have an obligation to ensure that we see more students come into this university, succeed while they’re here and then leave this university with as minimal debt as possible. With an education that allows them to be a well-rounded citizen and contributor to society, and with a job and a career that can help them give back to the economy of Eastern North Carolina and our state.”

It’s a traditional ECU mission. Things were different, at least in tone, with former Chancellor Cecil Staton, who came to Greenville in 2016 and lasted three years before resigning. Staton talked about ECU becoming “America’s next great national university.  …This sleepy little school in Eastern North Carolina is not going to be a sleepy little school anymore.”

That is not how Rogers talks. There are very specific regional challenges, and he has to get everyone on board to meet them, daily. Here’s one: Soon there will be fewer 18-year-olds in most Eastern North Carolina counties.

So less about “Harvard on the Coastal Plain,” as one columnist described Staton’s vision. More about reversing enrollment declines, which requires, in part, admitting more students from poorer, rural areas and keeping them in school.  Or adults juggling work and family and keeping them on track. That is what student success means. It is not a slogan.

It is the most critical job in higher education. Rogers understands the problem.

ECU’s enrollment has declined since 2017 while the 16-university UNC system has grown. “If everyone else is growing and we’re shrinking, clearly there’s something that has to be done or we start to shrink the whole university,” ECU trustee Thomas Furr said in September.

In the fall of 2017, ECU’s enrollment peaked at 29,131. Since then, it has dropped nearly 4% to 28,021. Systemwide enrollment grew by nearly 5% in the same period. (Three other UNC System campuses have also shown declines: N.C. Central, UNC Greensboro and UNC Asheville.)

Another hot-button is the admission rate of high school applicants. ECU admitted 93.9% of fall 2021 applicants, the highest rate in the system, up from 62.2% in 2012. By comparison, N.C. State admitted 47.5% and UNC Chapel Hill, 20.4%. Excluding those two schools and the School of the Arts, the other 13 UNC campuses admitted 79.2% of applicants from high schools, up from less than 60% a decade ago.

With student success, the initial challenge is first-year retention. At Chapel Hill and State, an average of 95% make it to sophomore year. The rest of the system was at 79.5% for the group that arrived in fall 2020. ECU was at 80.5%.

The bigger challenge is getting them out. At ECU, the five-year graduation rate has increased from 57% for the group that entered in 2007 to 69.1% for students who started in 2016. (This includes individuals who start at ECU but finish, for whatever reason, at another school.) The UNC System strategic plan five years ago set ECU’s goal for the 2017 group at 70%, so it’s on track.

When asked about the acceptance rate, Rogers talks about the mobility index and graduations for low-income students. Transforming a region requires poor kids getting through college and into jobs. 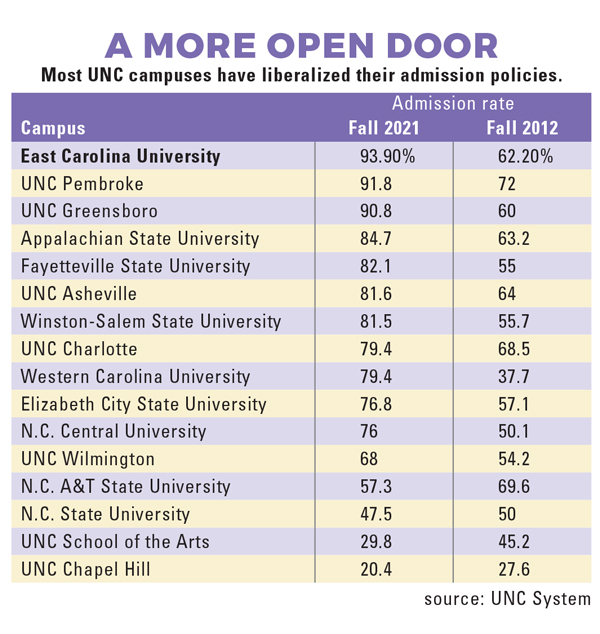 But they need to be good-paying jobs. That’s why the university received  millennial campus designation — enabling public-private partnerships — on more than 500 acres in Greenville and on the coast beginning in 2015. A $215 million medical school next to Vidant Medical Center will replace a 40-year-old structure. The expanded campus includes a former tobacco warehouse district renamed Intersect East, where companies and researchers can collaborate. It is near the $90 million Life Sciences and Biotechnology
Building that opened in November, including the Golden LEAF Foundation-funded Eastern Region Pharma Center to train workers for the region’s growing pharmaceutical manufacturing industry.

Within the past decade, ECU has secured funds for the new medical school, graduated the first dental school class, opened the life-sciences building and created the research district. But good news about ECU sometimes doesn’t travel west of Interstate 95.

More visible were conflicts between the UNC Board of Governors and then-Chancellor Staton. Greenville businessman Harry Smith, who served as board chairman in 2018 and 2019, wanted his alma mater and other UNC schools to be run more like a business. At an ECU trustees meeting in February 2018, Smith suggested that the school’s acceptance rate was too high, and part of its enrollment problem was because of the troubled football program.

ECU has a passionate sports fan base with 57,000 ECU alumni working in the state, second only to N.C. State. When things aren’t going well, that’s a chancellor problem. In 2015, a popular coach was fired by the athletic director. ECU subsequently had three straight 3-9 football seasons.

Smith was making this point to the trustees: When you have a successful football or basketball program, it draws attention and helps increase applications. ECU’s “calling card,” he said, was a packed Dowdy-Ficklen Stadium “with kids having fun in a great atmosphere of Pirate pride.”

When ECU eventually bought out the athletic director in 2018, Staton’s take may not have sat well with Pirate Nation. ECU was the “workhorse of the state,” he said, a school that was graduating doctors, nurses and teachers. “When we lose sight of that, it’s very unfortunate.” He said he was committed to a winning football program. “But we also have to keep a perspective here, and the long-term view that we are America’s next great national university, and we’re not going to be sidetracked on that journey, or that aspiration, by these kinds of things.” Staton would resign a year later.

I asked Rogers about ECU athletics. He said: “You have to identify ways for it to serve the catalyst of success within the institutional mission.

“And whether that’s student experience or drives economic impact on game days, and it drives opportunities for cultural experiences for people across the region, I think it has a role to play. It has to be a very targeted and thoughtful one.” Last fall, ECU’s football team had its first winning record since 2014, going 7-5.

Rogers also inherited ECU’s challenging health care role.  Vidant Medical Center was a county hospital that is now the flagship of Vidant Health, a not-for-profit major employer with hospitals and practices throughout the East. The center is the teaching hospital for ECU’s medical school. Both Vidant and ECU serve a lot of poor, underinsured folks, which poses financial challenges.

In 2016, a proposed merger of Vidant and ECU practices stalled. In 2019, Vidant and the UNC Board of Governors fought over appointments to the Vidant Medical Center board, prompting litigation and an eventual compromise.

A “joint operating agreement” for the medical practices was reached last year that will combine some management structures and planning efforts. “We are literally reinventing a 40-year partnership to build a rebranded academic health system that focuses solely on regional transformation in Eastern North Carolina,” Rogers says.

ECU is also developing stronger relationships with community colleges. This is why Harry Ploehn, engineering and technology dean, was at the December groundbreaking of Wake Tech’s new campus in Wendell.

ECU’s bachelor program in industrial technology lets community college students with applied-science associate degrees transfer in as juniors. They can finish their ECU degree without leaving home. Most of the concentrations within the program are online.

“I think, as a university, we can’t just build it here and they will come,” Ploehn says. “Our community college partners know their communities. They’re the ones that have the easiest access to the K-through-12 schools. They also have the best access to their local industry partners.”

ECU has also been the leader among UNC System schools in online classes. Between 2012 and 2019 — before the pandemic — ECU’s online-only enrollment grew nearly 43%. Online-only students were nearly 25% of all students by 2019.

Online options also help ECU pull from urban areas. More ECU students are from Wake County than Pitt. ECU is about transforming its region, but it is drawing students from all 100 counties, in person or online.

The view from the bridge

In December, I drove on the west side of Greenville to look at the hospital and medical school.  Heading east to the main campus, I crested the rise of the bridge on the 10th Street Connector that opened in 2019.

The bridge is named for Dr. Andrew Best, an African-American physician who led the effort to desegregate ECU and Pitt County Memorial Hospital. The road is named for former Chancellor Leo Jenkins, who came to a 1,500-student college in 1947 and led its transformation into a university. He and Dr. Best worked to create the medical school that admitted its charter class in 1977.

I was driving east on the bridge, and on the left, ahead, was the life-sciences building and on the right were the warehouses that will be the research and innovation hub. I was looking at, maybe, the future of Greenville, ECU and Eastern North Carolina. The region has had leaders such as Dr. Best and Jenkins. Now it’s Rogers’ turn. ■