Nearly two-and-a-half years ago, Business North Carolina wrote about Rich Deming’s plans to build what he calls a “poop-to-gold” waste energy plant in Farmville, which is 10 miles west of Greenville in Pitt County. But financing the deal to produce electricity from renewable sources proved much more difficult and frustrating than expected.

Three weeks ago, Rich emailed: “Well, we got it done.”

Today, his Power Resource Group’s $32 million Farmville plant goes online, converting turkey waste into electricity that is sold to the state’s utilities. It’s the result of North Carolina’s pace-setting effort approved in 2007 that requires the utilities to obtain a significant amount of their energy from renewable sources. It’s not the first or biggest of such poultry-waste energy plants, but it’s an impressive story of persistence.

The project will consume more than 230 tons of poultry litter per day to generate enough energy to fuel about 13,000 homes, Deming estimates. The litter is processed at a farm 20 miles away in LaGrange. Rich explains the financing this way:  “The project cost was $31.5 million, most of which was provided by First National Bank, with a $5 million boost from a private equity fund and roughly $2 million from PRG’s partners and a network of investors.”

North Carolina ranks among the nation’s key poultry production states with more than 39,000 employees. Much poultry waste is now used by farmers as fertilizer, a process that sparks some environmental concerns.

Deming’s answers below are slightly edited for clarity.

Are similar projects running around the state already?

Prestage Poultry has a similar one in Moltonville (in Sampson County.) There is a smaller one in Pink Hill and a larger one in Lumberton.  We’re the first by a smaller, home-grown N.C. firm. The rest are owned by relatively large companies.

Twelve in the plant and on the farm and four in administration. The effort also allowed us to put on three more folks for our general development effort and to prepare for the operation of future plants.

What is the waste mix?

It’s 100% poultry litter. Turkey at this point but we can just as easily use chicken if we need to.  We have a lease on a 180 acre farm in LaGrange on which we have built a feed-stock processing facility.  It aggregates litter from dozens of farms across the region. We have storage for 40-plus days of feed-stock under roof there, so we have a stable supply.

Can you share a couple of key reasons for the delay?

It was 100% caused by finance. It’s pretty tough to pull this off without a huge balance sheet. We went through the diligence process with multiple private equity firms — a painful, lengthy process each time. We never failed diligence, but in the end we were stubborn about terms. Most PE firms require you to give up the ownership of your facility in return for distributions that they can then take away for a variety of sometimes opaque reasons.

It’s not pleasant for the developer; the developer often has no choice. At several key junctions, we just decided to go raise some more money internally or from our close network, go ask the utilities for some help with deadlines, and just say no. Term sheets at the beginning of diligence can look great; the devil is in the details of the final agreement. Finally, we got far enough to get to bank financing, which is an entirely different world. Once we had adequate funding in place, it took less than a year to build it.

Also, internally, we have an engineer, a great finance professional, and two lawyers in the partnership. That meant that we could go through these diligence processes without spending a terminal amount of cash. A terminal amount of new grey hair and deep fatigue — but not cash.

The nice thing is that everyone wants to be first to be second.  We have multiple funding options in place for the next facility, so the process is going to be much, much smoother.

Are you still positive on the experience?

As long and arduous a process as this was, it’s proof that the system has really worked in North Carolina. The system was set up in 2007 with Senate Bill 3. By providing the additional horsepower for solar, we became the state with the second largest volume of installed solar in the U.S. Now, solar doesn’t require renewable-energy credits because it’s pretty much cheaper than carbon-based power.

Uniquely among the states, North Carolina was wise enough to provide a carve-out in that law for poultry and swine pollution as energy feedstock. That’s a tough nut to crack — it’s a sort of alchemy to turn this poop into gold. But because of the renewable energy portfolio standards, people like myself and my partners have gone through the ringer to get it done. And now a North Carolina home-grown company like the Power Resource Group has attracted and deployed $30M in capital, created 20 new jobs so far, and is poised to put many more of these facilities into play in the state.

And we’ll need less help in the form of incentives each project — likely none by project No. 3. Renewable energy isn’t just good for the environment, it’s a tremendous engine of economic growth.

How is the energy created and use?
Steam is created in a massive vessel which turns turbines to create electricity. About two megawatts of electricity is put onto the grid industrial and residential use in the immediate area. After the energy goes through steam turbines, the heat is exchanged to clean water and sent to an agricultural processing facility next door (Hamfams.com).  The energy is used to blanch vegetables, sterilize produce, etc.  In addition to the jobs we’ve directly created, by solving for waste and energy we have helped our neighbor industry greatly expand their operations. It’s win-win-win-win:  reduction in pollution, energy resiliency for the grid, direct and indirect economic development.

Do you have a hands-on role?

Well, I’m the CEO and this facility feels like it’s my child. I’ve been working toward this goal for five years so I’m pretty excited. I certainly check on how commissioning is going every day. But we have built a really first rate operations team including very experienced people working as chief operating officer, vice president of operations and plant manager. I will try to stay out of the way.

Our plan is to build, own and operate a lot of these facilities, so I have to stay focused on acquiring the next sites and working with future counter-parties. I want to move to the next challenge in about 5 years, and I plan to have five more of these in the group by that time.   After one more of these, we plan to move to a different mix of feed-stocks.

Who are your energy-industry partners?

A consortium of utilities purchases the poultry renewable energy credits (RECs), which helps them fulfill their renewable portfolio standard requirements. Pitt and Greene Electric Membership Cooperative is the local utility and we are interconnected to their grid. The consortium of utilities purchases RECs at the percentage of their coverage area in North Carolina, so Duke has most of them, the electric coops have the next largest chunk, and down from there.

Is this really clean energy?

This feedstock is now distributed for fertilizer, which means that the chemical components not used by the plants ends up in the ditches, then the creeks and streams and then the larger waterways. There are places in the world experiencing fish kills and other horrors directly from poultry litter. At this facility, those components end up in the ash, which is then used by the fertilizer industry for a more tightly controlled application. Little is lost into the waterways. Also, a substantial amount of methane —a seriously harmful greenhouse gas — is diverted by not simply composting outside.

How does your company benefit?

Well, we own and operate this business. So we put revenue in our bank account. Anything left after we pay our expenses, debt service and taxes is our profit, to distribute to project partners,

Who was general contractor? 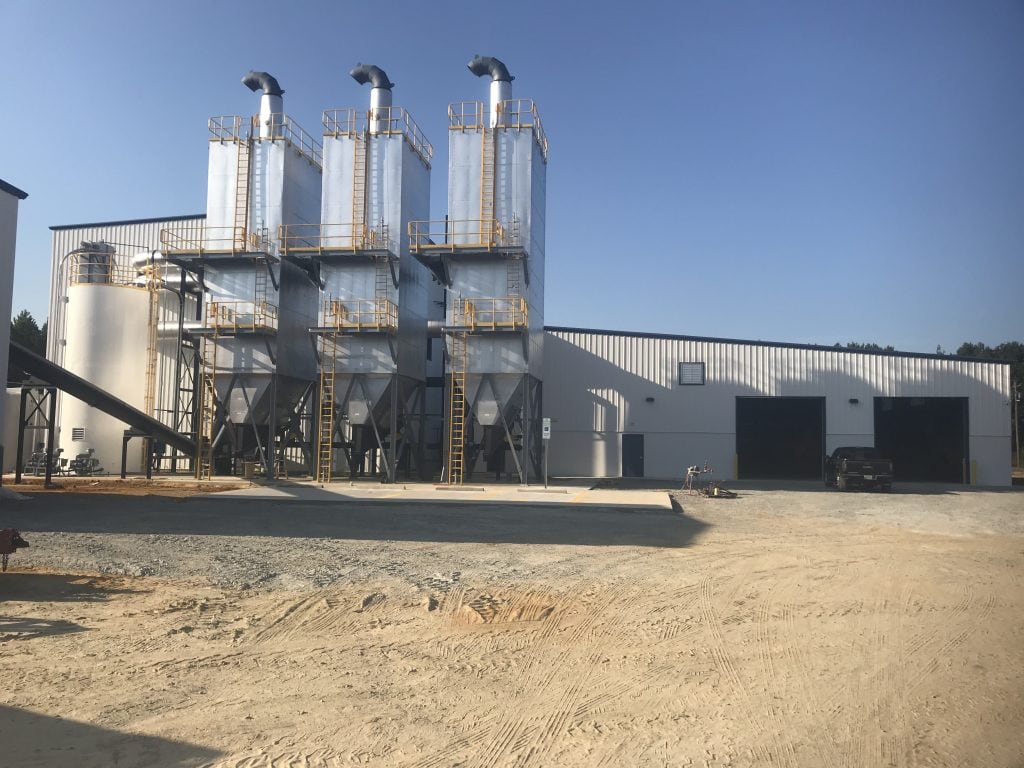