Brown’s grandparents raised him in High Point. He credits his grandmother, Miss Nellie Brown, for guiding him through decisions with sayings such as, “You can find good anywhere and do good everywhere.” His late wife, Sallie Walker Brown, whom he met in church when he was 5, proved another strong influence throughout their 48-year marriage.

Brown joined the High Point Police Department as an officer in 1956. He moved to New York City to work for the Federal Bureau of Narcotics. In 1961, he and his wife returned to High Point to open B&C Associates, a public relations firm that he still leads. It was one year after four Black college students staged a sit-in at a segregated F.W. Woolworth lunch counter in neighboring Greensboro, prompting similar protests across the South.

His initial work included helping local businesses address civil rights issues and other social changes. His success locally prompted him to think on a national scale. A cold-call sales pitch landed a contract with Woolworth’s public relations firm. His ability to solve problems later earned him work with a couple of dozen major corporations, including Coca-Cola, General Motors and Michelin.

In his book, You Can’t Go Wrong Doing Right: How a Child of Poverty Rose to the White House and Helped Change the World, published in 2019, Brown chronicles his involvement with the Southern Christian Leadership Conference, Richard Nixon’s presidential campaign and visits to South Africa. He explains how the Nixon administration, where he served as a special assistant for four years, created the Office of Minority Business Enterprise, promoted increased aid to historically Black colleges and universities, and grew the number of Black officers promoted in the military.

Brown, 85, stays active with his firm and chairs the High Point University board of trustees, where he’s served for 17 years. He also enjoys gardening and reading. His comments are edited for length and clarity. 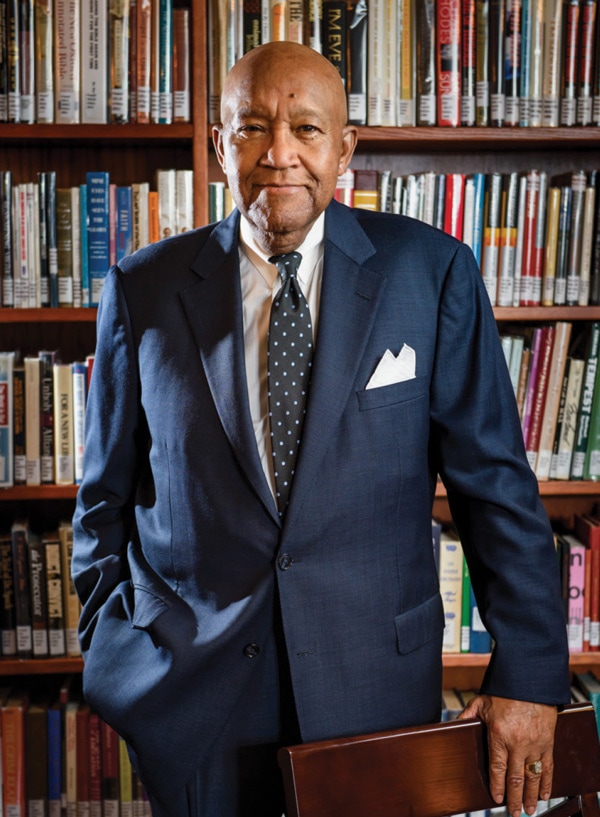 From the time I was growing up, until [my grandmother, Nellie Brown] died, she said, “Bobby, always do the right thing.” To say [her words] made an impact would be an understatement. [They] helped me shape my life in terms of what I wanted to be. I always wanted to be like my grandmother, who had a third-grade education, whose father was a slave in eastern North Carolina. I just wanted to be like her because she was giving, and she was lifting up everybody.

Dr. King was a magnificent human being. I became a member of Dr. King’s board and his executive committee. I traveled with him and raised a lot of money for him and opened a lot of doors.

I said, “You know I’m a Democrat,” and [Richard Nixon’s campaign staff] said, “Well, we don’t care anything about that. What we want are your contacts and your skills, and all of that.”

We started the whole Minority Business Enterprise program. What we were trying to accomplish is to give Blacks an equal chance at the starting gate in business, because before that, Blacks were having much difficulty with getting any contracts out of the government or key jobs.

One night I’m in a [South African] hotel room, and I get a call: “[President of South Africa Pieter Willem Botha] asked me to call you to let you know that he is granting you permission to go inside Pollsmoor Prison to see Mr. Mandela, if you want to do that.” I was blown away. Nobody had seen Mandela except his immediate family, and then only twice a year for 15-minute intervals.

I told [Botha] I thought he had a beautiful country, but there were so many things that needed to be changed and needed to be done.

“I’m of the opinion, like everybody else, you need to release Mr. Mandela, because he’s a great man, and he loves this country just like you love it.” Then [Botha] went off on me. He started shaking his head, and a little bit of juice came out of both sides of his mouth, and he’s halfway screaming at me. He said, “Mr. Brown! Mr. Brown! I offered that man his freedom. He wouldn’t take it.”

“Mr. President, you may have offered him his freedom, but you offered it to him with conditions. Mr. Mandela will not come out of jail with conditions. You can let him out of jail, and you can have one of the greatest countries here on earth. You have brilliant people. You have very great resources. You’ve got to do something different.” (Mandela was released in 1990 after 27 years in prison.)

I think many of us in our organizations went to sleep on a lot of things. Everybody was beginning to think that everything is alright, but what you have to have is complete vigilance all the time. You have to understand the rules of the game and what’s happening to all the people, whether you be Black, white, blue or green. Our government has a constitution, and in it, we’re supposed to be living by that. We’re supposed to be living by what’s right for everybody, no matter what your religion or race is. That’s where we need to be, and that’s what we’re still working on.

Well, we should never forget. No agency, but particularly the police and law enforcement agencies, should never forget that we have to have continued vigilance on every part of what we do on a day-to-day basis. In many instances, we’ve got to live by what all of us, or most of us, were taught growing up. You’ve got to treat everybody right. I mean, you can be tough, and many times I was a very tough police officer and federal agent, but I never took advantage of anybody.

We haven’t made the kind of progress that I thought we could or should be making in the business arena. I think there needs to be interaction all over the place between top Blacks and top whites in America.

I love High Point. It’s where I was born and raised. There are a lot of great people here. There are a lot of things that I’ve helped to do to make this the kind of place where everybody would want to live. We still have our challenges from time to time, but it’s a great place to live. ■