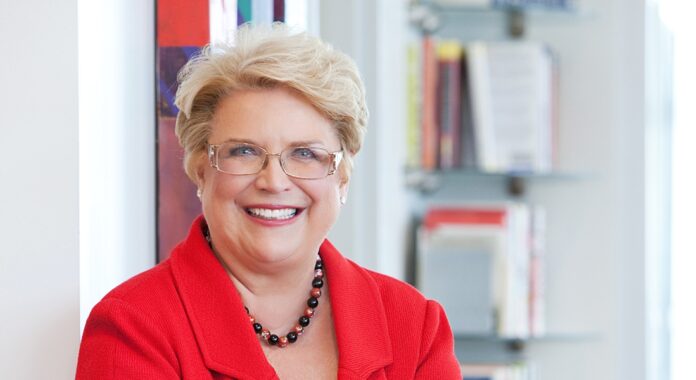 Linda Hudson refuses to be a tech dinosaur. The founder and strategic advisor of The Cardea Group in Charlotte wants to be the first one with the newest gadgets — and she’s used to being first. A 2007 profile in London’s The Sunday Times called her the First Lady of Defense, citing her career breaking glass ceilings in leadership, engineering, operations and production roles at various military contractors.

Hudson gained notice in North Carolina in 2002 after moving the headquarters of General Dynamics’ Armament and Technical Products unit to Charlotte from Burlington, Vt. Four years later, she joined BAE Systems, the U.S. subsidiary of Europe’s biggest defense company, as head of its Land and Armaments division. In 2009, she was named CEO of BAE’s entire U.S. business, a post she held until retiring in 2014.

Since leaving BAE, she has coached CEOs and other senior executives through corporate and individual transitions and served as a director at Charlotte-based Bank of America and Ingersoll Rand, an Ireland-based company with North American headquarters in Davidson.

Hudson, 69, grew up in Leesburg, Fla., and graduated with a systems engineering degree from the University of Florida, where she is on the boards of the foundation and engineering college. The die-hard college football fan has 12 season tickets to Gator games. She shared her experiences in comments edited for length and clarity.

I was the first girl in my high school to ever take engineering drawing. That was my first foray into doing something that a girl in those days had not done. I just so desperately wanted to be an engineer, [and] the only way to accomplish that was to jump in with the guys, if you will. I had to find a way of driving myself, because I never had the opportunity to know a woman that was in a higher position than I was in.

I refused to be a victim. When things would get tough, I would just remind myself that being a victim never [has] a successful outcome and turn that frustration into determination [that I would] just go back and prove them wrong.

When you’re different, people are watching. They’re watching you much more closely, and if you trip up or you make a mistake, it gets amplified dramatically. I’d just focus on every job I had, everything I tried to do in that very moment, not thinking ahead. But at that very moment, I was going to do that job better than it had ever been done before. I never thought about what was next. I just thought about what I had to do to succeed now.

I like to say going to work was like a knife fight in the dark. I mean it was a cutthroat, kill-or-be-killed kind of environment. You developed very aggressive [skills], not collaborative skills at all. It was really survival of the fittest.

There was no such thing as consensus or trying to get input. It was fall in line, take orders, do what the corporation tells you to do. That was true for maybe the first 20 years of my career.

The world changed and suddenly, we had a workforce that wasn’t going to tolerate that kind of behavior, and the expectations began to change, and my roles got bigger and bigger. Suddenly, I realized I had to change. I had to work at learning to be collaborative. I had to work at learning to seek input before I made a decision, because I’m perfectly comfortable making a decision and charging that hill.

As I got older, I worked really hard at making sure I stayed current with everything out there. I’m a gadget geek. Anything new that comes out, I want it. I want to understand how to operate it. I don’t want to be the one with the old phone when my engineers have the new, cool phones.

I had to reduce my workforce by 20,000 people — from about 60,000 to about 40,000 people. It was one of the hardest things I’ve ever had to do. Those are decisions where I think if you’re human, the responsibility of making the decisions that affect people’s lives so significantly is something that you really can’t articulate unless you’ve been there.

I do not think the defense industry holds too much influence over the whole military/industrial relationship. I’ve always seen it as a partnership, and I don’t think either can exist effectively without the other. It was always a partnership with the same mission, the same commitment to doing the right thing for the country and protecting those who serve in the military.

Own your role. Project the confidence that you have. Don’t be afraid of who you are or what you’ve accomplished. I think often, women tend to not step up to what they’ve done or want to talk about what they’ve done. Don’t let anybody intimidate you.

There was a point in my career where I was told to move, and my husband and daughter said they weren’t going. I went anyway. Four years later, I got divorced. I had worked so hard to accomplish what I would accomplish that I was not going to walk away from that, and I didn’t.

I don’t regret the decision at all. Clearly it had an impact and was challenging for a number of years. Fortunately, my daughter was 18 when we got divorced, so I didn’t have to deal with a small child in the midst of that. That was the most challenging time of my life because my personal life was quite chaotic, and it was at a critical juncture, careerwise, for me.

Life is full of inflection points where you make choices on what’s important and why. There are minor other decisions during the course of my career that were challenging, but nothing on the scale of being put in a situation of my career versus my personal life.

Seven years before I retired, I started thinking about what I was going to do next. I actually incorporated this company seven years before I retired. We help people and businesses manage themselves, their organizations, or their groups through various transitions: either job changes [or] inflections in strategy, growth, transition — say, a retiring executive or promoting executive.

It is all about the people you surround yourself with and how you manage those people and how you inspire them to do what needs to be done, because your success now depends on how they perform, not on how you perform. Some people just cannot grasp that. They’re not willing to let go of control enough to manage a really large organization. Those are the kinds of things I try to help people think through.

What’s important has changed over time, and I expect it will continue to change. Right now, for the next couple of years, I have a house to build. I have a few other things I’m working on, and I just take it one day at a time.