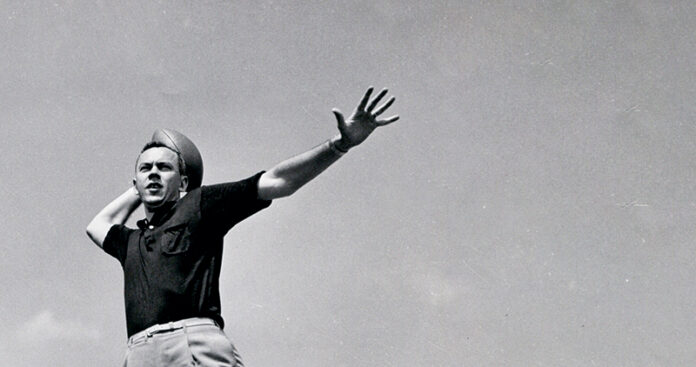 The Asheville native made his mark on North Carolina as an innovator in public relations. His promotional ideas helped attract tourists from around the world to the state’s beaches, mountains and golf courses.

Although Bill Hensley’s achievements have been recognized with numerous awards, his part in getting a Charlotte referendum measure that allowed diners to order mixed drinks at restaurants passed in 1978 may be his crowning glory.

Hensley, 95, served in the U.S. Naval Construction Battalions in World War II before enrolling at Wake Forest University. He accepted a position with the Asheville Citizen newspaper in 1950. The FBI lured him away with a $5,000-a-year salary, double his reporter’s pay. He spent two years capturing fugitives (two in his first day) and conducting background checks in New Haven, Conn., and Chicago. But he missed his home state, so he returned to become the sports information director at Wake Forest and, later, N.C. State University.

In 1960, Hensley moved to Charlotte to work in public relations at the R.S. Dickson investment company and Wachovia Bank. After five years, he was tapped as the state’s director of travel and tourism, serving under Govs. Dan Moore and Bob Scott. Later, he worked with Carowinds founder Earl “Pat” Hall to help promote the theme park before its 1973 opening.

By 1977, Hensley launched Hensley Associates with five steady public-relations clients focused on business and travel. They included Piedmont Airlines, then run out of Winston-Salem, and Asheboro-based Stedman Mills. In 1979, his son, Bruce, joined the staff.

In the early 1980s, Hensley formed High Country Host, a cohesive marketing network for the tourism businesses in northwest North Carolina, with Grandfather Mountain’s Hugh Morton and Tweetsie Railroad’s Harry and Spencer Robbins. High Country Host has since grown into a multicounty organization. Over the years, he has represented many N.C. golf developments.

Hensley has been inducted into four North Carolina-based halls of fame, is a resident of the Cypress retirement community in Charlotte and still enjoys golfing at Hound Ears Club in Boone. Comments are edited for length and clarity.

Let me start with Arnold Palmer. I met him in 1948. I was a sophomore when he came to Wake Forest [University]. He started winning all these tournaments and became very well-known [across] the state as a great golfer. I did one of the first feature stories on him, and he never forgot that. I think The Charlotte News ran my story on him. We were friends for 50-something years.

My friend was the travel director of Georgia, and I was the travel director of North Carolina. [Georgia] was doing well with welcome centers. I met with my friend and asked him to explain how to do this. I met the [woman] who handled it, and we hit it off real well. So I hired her to leave Georgia and come to North Carolina. We put together about five welcome centers at key places [across] the state. They operated seven days a week, and they were very effective.

I would get 15 to 20 people from North Carolina to go with me to Europe or South America. We would have a big cocktail party for travel agents. We would show films on North Carolina and [give] them literature. We’d bring in country music entertainers like Lulu Belle and Scotty. They were well-known nationally. It was effective because we spread the word about North Carolina in places it needed spreading.

The mountains had good promoters. [High Country Host] was a promotional organization that I started with two others. Hugh Morton owned Grandfather Mountain. Harry Robbins owned Tweetsie Railroad, Hound Ears and the Blowing Rock [attraction]. We [entertained] a lot of travel writers. That was my strong point. I knew a lot of travel writers, and I invited them to the area. We wined and dined them pretty good, and it paid off. We worked hard at it. We didn’t fool around.

The thing I am the proudest of is the liquor-by-the-drink [referendum]. The [Charlotte] Chamber of Commerce tried to get some big shots to be the chairman of this committee, but no one would take it. Three or four people turned them down because it was controversial. Churches don’t like drinking. There’s a lot of conflict with liquor. I volunteered, and they accepted me.

One of the things that really got us going was one remark that I happened to come up with. I would say that in those days, “you could buy liquor by the gallon, but you couldn’t buy liquor by the ounce,” which made no sense. We tried to teach the churches that this was an economic campaign and not a lifestyle campaign. The churches never got upset with me. I think I got two or three calls or letters in this whole campaign. It meant new restaurants and new businesses.

Billy Joe Patton was from Morganton. He went to school at Wake Forest and almost won the Masters [Tournament] one year as an amateur. He came within a stroke or two of winning it. He was the most colorful person I’ve ever known. You had to love him the minute you met him. He did a lot to promote North Carolina and golf here. I give him a lot of credit for helping golf.

Spencer and Harry Robbins were creative, and they thought of things that most people wouldn’t think of to promote. They used to bring in a lot of celebrities like [country singer] Fred Kirby. They would pay some of these famous people who were on national television to come to Tweetsie or Blowing Rock and do something. They’d get a bunch of photographers there and take pictures of it. They’d get statewide publicity.

When I was with Wachovia, I was good friends with Kays Gary, a columnist for The Charlotte Observer. We were talking one day, and he said, “Let’s do something, a promotion.” I said, “OK, I think schoolkids need more musical instruments. I think if we would furnish more instruments, we’d get more people playing.” We started a campaign that we called “Give a Toot.” Each family in Charlotte probably had a musical instrument that wasn’t being used, and we thought they’d donate them to us. We got them in good shape and then gave them to schoolkids. Somebody gave us a violin that we thought was a Stradivarius. We got a lot of publicity on that before we found out it wasn’t a Stradivarius. We would do pictures of Wachovia Bank, and we asked people to turn the instruments in at a Wachovia office. That was one of the most satisfying promotions I’ve ever been in. ■