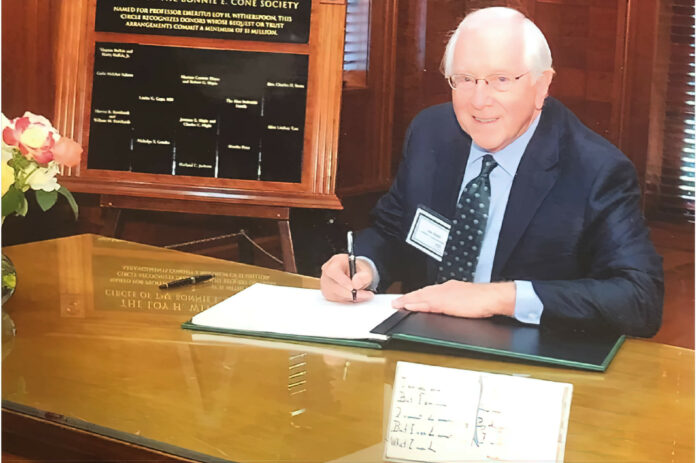 Jim Babb may owe his career in journalism and broadcasting to Dilworth Highlights and Headlines, the student newspaper at his Charlotte elementary school. Since then, he’s been devoted to telling stories and forwarding the television and radio industry.

Born in Manhattan, Babb and his family moved to Charlotte in 1937. In high school, he was a sports correspondent for The Charlotte News and The Charlotte Observer. He attended Newberry College on a football scholarship for one semester, then switched to UNC Chapel Hill to study journalism. Unable to afford tuition, he left after two years and joined the Army. A lieutenant noticed his love for writing and helped him land a public information job covering sports at Fort Jackson in Columbia, South Carolina.

After completing his military obligation, Babb earned a bachelor’s degree in business from Belmont Abbey College in 1959. His first job at Charlotte’s WBTV required him to write promotional articles about TV personalities. The station had been in business for 10 years at that time. He met his wife, Mary Lou, while hand-delivering the stories to the Charlotte Observer, where she wrote for the “women’s pages.”

He spent the next three decades with WBTV and its owner, Greensboro-based Jefferson-Pilot Broadcasting. He was the station’s general manager in the mid-1970s, then became an executive vice president in 1978 and the broadcaster’s CEO in 1988.

A tiff with longtime Jefferson-Pilot CEO Roger Soles prompted his departure in 1991. He promptly became president of Outlet Communications, a smaller TV and radio broadcaster owned by private-equity investors. He commuted to Outlet’s Providence, Rhode Island, headquarters for five years before the company’s three TV stations were sold to NBC for more than $310 million.

He ended his career in 2018 as executive vice president at Charlotte-based Bahakel Communications.

His accolades include an Emmy Award for lifetime achievement from the National Academy of Television Arts & Sciences and an induction into the North Carolina Association of Broadcasters Hall of Fame.

Babb, 90, served as president of the state broadcasters association and chaired boards connected to the National Association of Broadcasters and YMCA of Central Carolinas. He has been a trustee at Appalachian State University, UNC Charlotte and Belmont Abbey, and he is a former member of the board of governors of the UNC System. When the Arts and Sciences Council of Charlotte ran its first $1 million fundraising campaign in 1982, Babb led the committee.

Jim and Mary Lou, married for 63 years, have five children and six grandchildren. Babb stays active promoting higher education through the Coalition for Carolina and Higher Ed Works and supporting Democrat politicians. The couple split their time between homes in Charlotte and Linville. 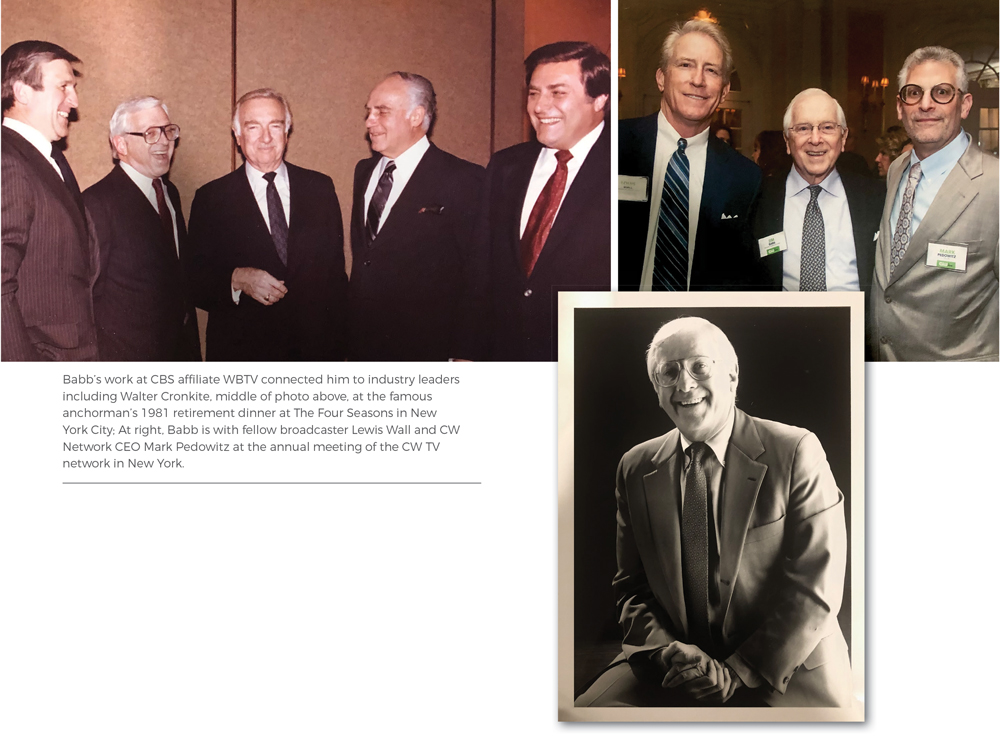 The story that got the most attention is one I wrote at Fort Jackson about the football team. The football coach was a guy by the name of Beattie Feathers. It was an induction center. All these good athletes would come in and they could keep them right there at Fort Jackson. I wrote the story and sent it to Jack Claiborne, who was working at the [Charlotte] Observer’s sports department then. Jack put it on the wire. It ran all over the Southeast. (Babb was a high school friend of Claiborne, who had a long Observer career.)

The story got surprisingly big play. I was shocked. Two days later, I get called in by the captain: “The general wants to see us.” We hustle over there. I’m still a Private E1. Gen. Daly says, “You got me in trouble with Gen. Bolling; it’s that story you wrote. It ran in the Atlanta Journal and he read it. He’s mad as hell I’m keeping all the good football players. Don’t send out any more stories like that.” It was the first time I’d ever been criticized for doing a good job.

Ironically, even though Jefferson-Pilot loaned money to all kinds of broadcasters all across the country, they were more conservative with their own company. We had to do organic growth. We grew from one radio station in Charlotte, WBT, [then added WBT FM]. Originally FM was a big money loser for everyone as we transitioned from AM. We bought stations in Atlanta, Miami and Denver. Those all proved to be very successful. Then we bought radio stations in San Diego.

Back in 1968, things were really getting complicated in keeping inventory [of advertising spots] and scheduling. I didn’t know a thing about computers then, or now, but I knew we needed a better system to handle our inventory. We just had a Mylar board with a grease pen.

I was having lunch with Charlie Crutchfield, the president of Jefferson-Pilot, at Quail Hollow. I think they just had a tent back then
before the clubhouse. I said, “We have to get a better system. We’ve got to look into computers.” We assigned an engineer to head up the computer operations in Charlotte originally, then we did it for the other stations.

Everyone was having the same problems. We launched Jefferson Data Systems in 1968, and it grew quite well. We bought a company in Australia and one in New York that dealt with advertising agencies. It was backroom operations, contracts, inventory control. We grew it into a $50 million company.

We started Jefferson Production Company back in the 1960s. We had a successful program called, Arthur Smith and the Cracker-jacks. They were great entertainers and Arthur was a smart businessman. The show became so successful, Procter & Gamble wanted to run it in other Southern markets. It ran in 35 markets. Then they started producing national commercials. We also had a remote truck to produce sports events like NFL games for CBS. 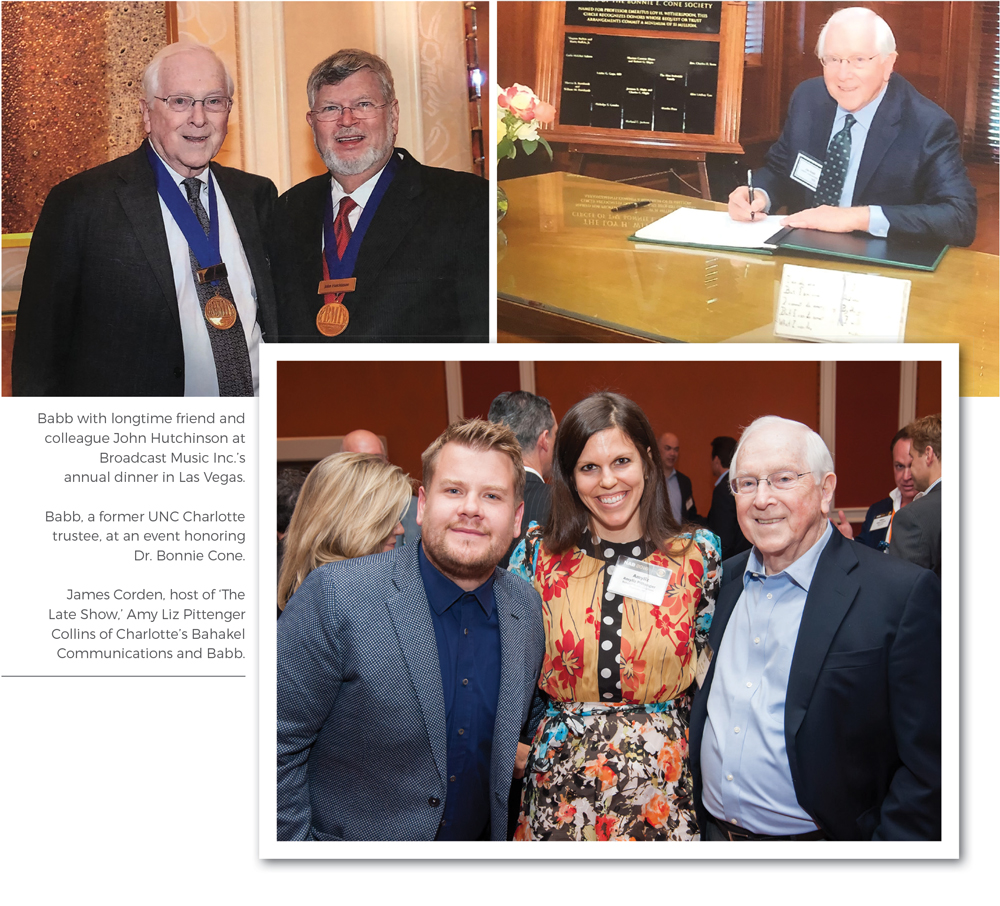 We did a partnership with Raycom Sports in 1982 and we made a bid for $18 million for three years [for ACC basketball]. No one had seen anything like it in the sports syndication business. It shook the business.

Roger Soles was the chairman and president of the company for much of the time I was there. He was very conservative. It was a challenge, to be honest with you.

[I said I would work for Outlet Communications] for two years until we could get someone else installed. It turned out to be the best experience I ever had in business. They were a very successful group of investors. They couldn’t have been better to me. I recommended they buy the Raleigh station [WNCN] and convert it to a CBS station, which I was able to do. I never made a recommendation or request that they turned down during the entire period. That’s the reason I stayed almost five years.

There’s a new group being formed called Majority Rising North Carolina. We are trying to overturn some Senate districts to try to get a little more balance in the North Carolina legislature. ■