Pillars of North Carolina is a new series featuring prominent men and women who have made a significant impact in their industry and communities.

Harvey Gantt’s always been a trailblazer. As a teenager, he sat at lunch counters closed to people of color. He became the first African American student to attend Clemson University in 1963. In 1971, he and Jeff Huberman formed Gantt Huberman Architects in Charlotte, a rare pairing of Jewish and black business owners. He was Charlotte’s first African American mayor from 1983-87 and ran two unsuccessful campaigns to unseat U.S. Sen. Jesse Helms.

Now, he’s enjoying retirement by playing golf and tennis and reading books about past presidents such as Washington, Lincoln and Grant. Gantt, 76, talks about the power of fear, optimism and business in comments edited for length and clarity. 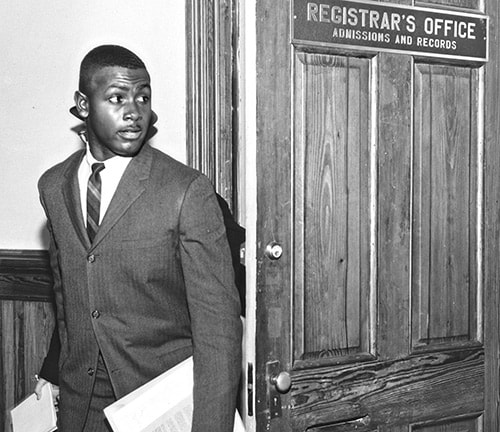 Sometimes you become the first just because history sets it up that way. I’m not so sure you are so special as much as you are at the right place, at the right time and you are the right person to have been there. That’s how I kind of feel about going to Clemson because it was a time of great ferment in the South and things were changing. The civil rights movement really had taken hold. Going to Clemson probably was a significant historical situation that’s lasting, but I don’t get too high on that because it could have been another student. It needed to happen, and I was just there at the right point in time.

Martin Luther King Jr. was a leader, but there were lots of other brave people that also showed courage that inspired me to have the courage to say, “We can do this, we can make changes.” One reason I have such an optimistic outlook today about the challenges we face is that we overcame so much back then that was even tougher. It took a lot of people to be courageous enough to want to make those changes. Those same kinds of people exist today to deal with the different kinds of challenges we have. Hopefully, many of them are inspired by those who went before.

There’s no getting around the fact that you represent a powerful entity when you employ people. When you seek to develop the industry, businesses and services that are needed in our society, you deserve to be respected for the impact you have on the daily lives of citizens. And you affect them in so many ways, all the way down to whatever they talk about at the kitchen table — jobs, wages, benefits.

When I ran for city council, I paid a lot of attention to what the business community was saying because I wanted them to continue thriving. I wanted them to help citizens get the best jobs they could to improve the quality of life for themselves and for the community. It’s a balancing thing. I think the best politicians, the best policy makers, are those who understand and appreciate the balance that you need there. We need the jobs, we need the business community, we need to protect the interest of the public, we need to speak for those on the political side who don’t speak very loudly. We have to represent those who feel that they don’t have a voice.

My best lessons came from failure. In each of those losses, I probably learned more about myself than the victories. And I think most people will when they reflect on it. You’ll remember why you lost; you remember what things you didn’t do right. You want to decide how you can correct it. Do I want to get up off the ground and start over?

We need to engage in the community itself. We need to talk about communities and be in the public forum more loudly than we traditionally have been. But having a voice in the public forum is absolutely very important for all professions, particularly architects who helped create the environments. Whether it’s the neighborhood you live in or the center city that you live in, we as professionals have something to do with how people feel in those spaces, whether they feel uplifted, because it affects the quality of life.

We are responding more to people’s fears then we have ever before. The country is absolutely changing, probably more rapidly than some people want. Those running for office are often expressing the fears that people have and ratcheting it up. That’s not the kind of political environment that makes for uplifted innovation and creativity and bringing people together.

Few politicians today talk about really trying to bring people together. We have the Democrats and the Republicans, and we’re shrinking that middle, moderate-level person who wants to hear both sides. When you appeal to what people are afraid of, they’re either going to go in one camp or the other.

I’d probably want to be remembered as being a person who just cared. [It could be a] client who is trusting me with large amounts of money to build their dream office, house or school. It was very important that they thought I cared about their project. Certainly, when I was in the arena of politics, my interest was to care about what was happening in our community and to care deeply about it. Not just one part of the community, but all of it, from businesses to neighborhoods to all the other kinds of people who hit the road every day to make the city work.