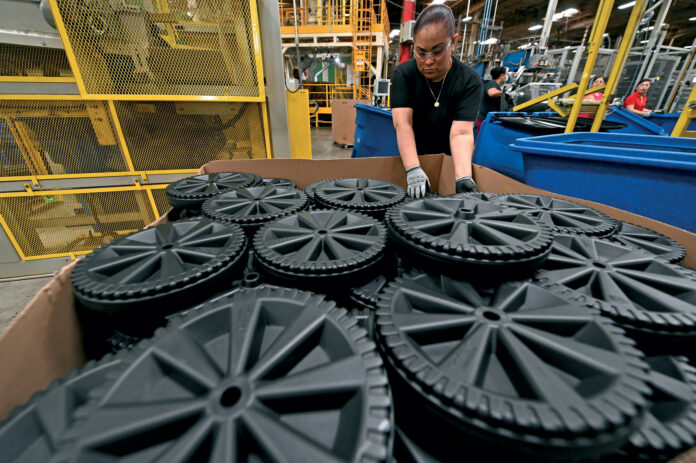 Employees are laser-focused inside Statesville’s Toter plant. Some monitor the molding process; others imprint and assemble finished products. Inside the warehouse is loud and warm, but staffers are hard at work, creating everyday products from small, plastic pellets.

Wastequip is a manufacturer of waste-handling equipment. The company acquired Toter, including its 30-year-old Statesville plant, in 2007.

Wastequip employs about 325 people in North Carolina, which is roughly 10% of the company’s total workforce across 47 locations in North America. The corporate office led by CEO Marty Bryant is in Charlotte’s SouthPark neighborhood, while its two plants in the state include the Statesville Toter site and Amrep, which makes garbage-truck bodies, in Salisbury.

Toter trash and recycling bins start as raw material, typically created from burning natural gas or crude oil, and undergo the company’s patented molding process, in which molds are filled with plastic micro-pellets. They then move to an oven that melts the plastic while the machine rotates. Following rotation, molds are cooled, trimmed, marked and assembled. 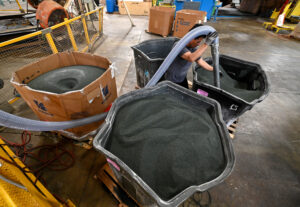 In 2020, Toter started using a robotic machine for mass production. The company still uses its older machines, though the newer model “is safer for employees, puts out more product over time, runs all the time, and is just as good in quality,” Daddabbo says. Though the newer machine is automated and could run 24/7, a skilled technician oversees the process to ensure it is working properly.

Wastequip introduced its corporate responsibility program, CORE, in 2020. Toter’s goal was to reduce the amount of virgin resin — or resin that has never been used in a product — in cart manufacturing by 25%. It became known as Project25, the company’s ongoing commitment to sustainability. The gas and crude oil used to create Toter cans can’t be replaced, and the process to obtain it can disrupt ecosystems, explains Kristen Kinder, vice president of research and waste stream sustainability for Wastequip.

“To lessen these environmental impacts, manufacturers can use recycled resin, which can come from consumers or other industries, to displace the virgin resin they use,” she says.

The twist: the bins made with less virgin resin should not compromise longevity and durability. “If we made a cart that had recycled content and it only lasted half as long, it actually would have a larger carbon footprint than if we had not used recycled (content),” says Kinder.

After testing to push the limit, Toter exceeded its goal and created the EVR-Green Cart, which has a cart body made entirely without virgin resin. These carts are created using the same patented molding process used for the company’s traditional ones.

Daddabbo says that “leave more behind than you take” is a mantra of Wastequip. “That [mantra] drove our Project25 and CORE initiatives.” ■

Wastequip was founded in 1989 by the late Charles Walton in Beachwood, Ohio.
Marty Bryant has been CEO since 2012 and is a former president of Dana Corp.’s Light Vehicle Products division, where he led 15,000 employees at 82 locations. Wastequip has been owned by private equity companies for many years, including HIG Capital of Miami, which bought the business in 2018. The company does not disclose its finances. 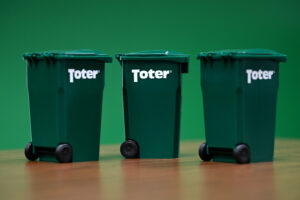