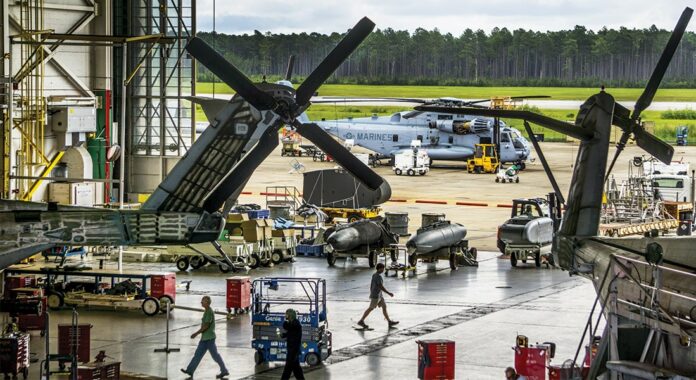 Picture this: Up, up and away

The supersonic stealth F-35 Joint Strike Fighter is so secret, visitors aren’t allowed to take the jet’s photo. But there it sits, the “B” version with the helicopter-like design that makes possible the vertical landings desired by the Marine Corps. Here in Havelock, Marine country on the North Carolina coast, the maintenance depot known as Fleet Readiness Center East is set to have a big piece of the most expensive project in military history.

FRC East has been a tenant since 1943 on Marine Corps Air Station Cherry Point, about 40 miles from the larger Camp Lejeune in Jacksonville, but even seasoned Marines often are unaware that one of the Navy’s three maintenance depots is under their noses. With about 3,800 civilian government employees, FRC East says it is the state’s largest industrial employer east of Interstate 95. Sister depots are in Jacksonville, Fla., and San Diego.

Like a car that needs periodic tuneups, aircraft rotor blades need regular replacements and engines must be overhauled, so the mechanics, engineers and journeymen at FRC East usually know what they’re getting. But other times, crews are faced with the Humpty-Dumpty job of putting a crashed or bullet-riddled airplane back together again. When a repaired plane leaves the hangar at FRC East, it should look as new as the day it rolled off the assembly line. In fact, the Navy refers to each job as a “sale,” to the tune of $670 million in sales last year and 125 aircraft, 111 engines and 20,000 components produced. Components are made up of thousands of small and large parts, 100,000 of which workers manufactured on site last year because many simply are no longer made by the private sector, especially for older aircraft.

Of the components produced last year, many were repeats. FRC East is the designated repair point for 19,000 different components, though it may only see about 3,000 to 5,000 of those in a given year. “Some of these we only get every three to five years,” says Mary Beth Fennell, director of corporate operations, “but we’re required to maintain capability” as long as the U.S. or its allies are flying the aircraft. Somebody has to fix the airplanes, no matter their vintage. Fennell is a member of FRC East’s executive leadership council, the equivalent of a board of directors. A Marine colonel is the depot’s commanding officer, but it is often civilian staff who provide continuity; Fennell has been at FRC East for 34 years.

The job can be hot, dirty and loud. On a relatively cool late August afternoon, workers in shorts clambered across the huge body of the lumbering H-53 heavy-lift helicopter. There are few air-conditioned workspaces here, with only sea breezes to provide relief in open hangars with the soundtrack of Harriers, Ospreys and other aircraft taking off and landing from Cherry Point’s nearby runway. Several squadrons here are set to begin retiring their aircraft and replace them with the F-35B.

The $104 million F-35 is the most recent addition to the United States fleet and breaks with the past by meeting the requirements of three military branches — the Air Force, Navy and Marines — each of which traditionally developed its own planes. But the Swiss Army knife of aircraft has a variant for each branch, including the Marine version that can take off and land from short runways or vertically like a helicopter. With the B model comes a new $43.7 million lift fan repair facility that is expected to expand the depot’s current footprint of 1.6 million square feet.

It’s a piece of a program expected to cost about $1 trillion by the time it is fully up and running, with an American fleet of more than 2,400 planes across the Navy, Air Force and Marine Corps by 2040. Add in new generations of existing aircraft and growing partnerships with private manufacturers who are hiring FRC East to modify aircraft, and the depot’s future seems secure.

Fennell says it’s clear that there is plenty of new work coming, but it’s uncertain if that work will require additional workers or more from the current crew. “When they turn the news on, they see their aircraft,” she says. “That gets a lot of pride. The workforce knows what we’re here for.”