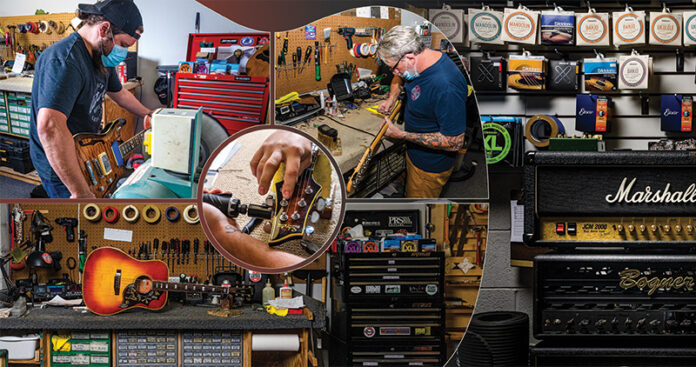 Story and photos by John Gessner

There are an estimated 16 million guitar players in the U.S., and as with many passions, you can’t just have one. Eventually, those guitars need repairs and servicing, creating an opportunity for Nick Plesz, owner of N.C. Guitar Works in north Charlotte. He is just as passionate about repairing guitars as his national customer base is about playing them.

“[We] literally have over 200 guitars in our shop constantly for repairs. I don’t think anybody has that much work across the nation.”

Plesz, 47, moved from Pittsburgh to Charlotte in 1998 to start a homebuilding company with his brother Chris, who had come to North Carolina three years earlier. In 2004, the business was hired to construct a guitar repair shop in a warehouse. Plesz took on the project and asked for his payment to be instructions on how to build a guitar. Before his own instrument was completed, Plesz was offered a job by the client, Landau Guitar of Harrisburg in Cabarrus County.

He spent the next several years learning the business and in May of 2012, he bought the company and renamed it N.C. Guitar Works.

Like many enterprises that focus on home-based activities, Plesz’s company has thrived during the pandemic, with business doubling over the last 18 months. Nick and his two guitar technicians, Stacey Leazer and Austin Hughes, are “rockin’ around the clock” to keep up with increasing demand for repairs, he says.

“A guitar is something you can hold and love and it’s never going to bug you. But here’s the secret about the guitar — it’s defiant. It will never let you conquer it. The more you get involved with it, the more you realize how little you know.” – Les Paul

“We used to be busy with 80 to 100 instruments in the shop. We have been hitting over 200 constantly and it’s actually kind of out of control. Our turnaround times are long and the phone rings off the hook. I had to stop taking in work for a few weeks, but it was still coming in. It’s hard to tell people ‘no.’”

Some customers have driven as many as five hours to the shop without calling ahead, he says. He credits the company’s popularity to a steady stream of positive Google, Yelp and Facebook reviews. N.C. Guitar Works also gets many instruments sent from the Carolinas stores owned by Westlake Village, Calif.-based Guitar Center, which has nearly 300 locations nationally.

“A lot of people are picking up their instruments that haven’t touched them in years. It happened when people started working from home,” Plesz says.

He also gives big credit to his colleagues for the business’ growth. Leazer is a talented bass player who has performed nationally. “He’s kind of a gearhead and has a lot of knowledge on bass guitars and base electronics. That’s probably my least favorite thing to do and he has stepped up and does a great job.”

Hughes, who is a big fan of Pantera guitarist Dime Bag Darrell, walked in the shop one day while one of the Texas heavy-metal band’s songs was playing in the background. “He must have thought he walked into heaven when he came into the shop where he now works with Pantera playing on the radio,” Plesz says. “I hope he decides to take over the shop when I decide to retire.” ■