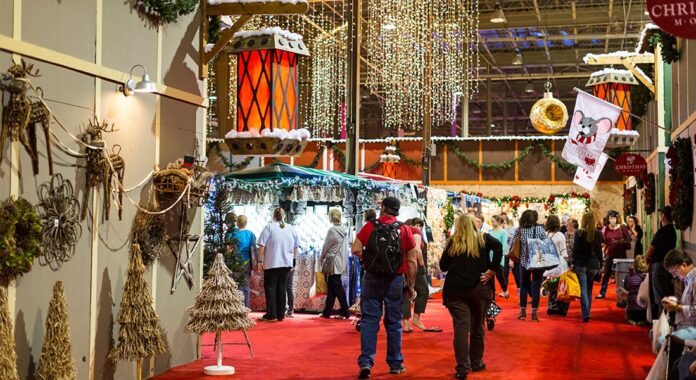 In a 40,000-square-foot warehouse near downtown Charlotte, it’s Christmas 365 days a year.

No, strike that. Take away the 10 days when the warehouse is emptied, its contents trucked to the Park Expo and Conference Center 4 miles away and transformed by electricians, carpenters, painters and artists into a “Cool Christmas” or “What Fun It Is” Christmas or “Carolina Christmas.” Minus another 12 days when 100,000 ticket holders will make a beeline for model trains, Christmas trees decorated dozens of ways or puff pastry at Helmut’s Strudel, and then a mere three days to break it all down. Back to the warehouse everything goes until next year’s 25-day whirlwind, when Christmas begins around Halloween and ends before the calendar flips to December.

On the brink of planning their 50th Southern Christmas Show, the Zimmermans have the country’s largest holiday bazaar down to a finely tuned checklist. Perhaps what is most surprising about the last 49 isn’t how much the show has changed, but how little. When Joan and Robert Zimmerman opened the first Southern Christmas Show in 1968, there was no internet, no crafts for sale on Etsy and no one-click shopping on Amazon.

But even as traditional department stores struggle to compete for online-obsessed Christmas shoppers, attendance has held steady, and the 500 vendor slots fill quickly. Guests spend about $15.4 million annually at the show, the Zimmermans estimate, with another $9 million of indirect economic impact in Charlotte, where attendees often spend the night, eat out and continue shopping elsewhere.

“It’s one of those institutions that really hasn’t changed that much,” says the Zimmermans’ son, David. “The draw, what the show is all about, hasn’t changed a bit.” It’s hard to imagine a website that could contain the food, jewelry, crafts, wreaths, ornaments, toys and more of a Southern Christmas Show, he says.

Zimmerman, 55, grew up alongside the show started by his parents. Now, he is president of Southern Shows Inc., the family business that produces the show and 17 other events in a dozen cities around the country. Adult admission to the Southern Christmas Show is $10 in advance ($12 at the door). The least expensive vendor booth is $1,250.

The Zimmermans started the business with the Southern Spring Home & Garden Show in 1961 and added the Christmas show seven years later. Robert Zimmerman died earlier this year, but Joan Zimmerman, 84, is still very much involved, greeting visitors and vendors, many of whom have attended for decades.

Rob Marshall has taken his Williamsburg, Va.-based The Christmas Mouse on the road for about 20 years. He mobilizes managers from his eight year-round stores in Virginia and the Carolinas for 17 days in Charlotte, including setup, 12-hour workdays during the 12-day show and “by far the worst day of the year,” the day his 2,000-square-foot show shop must be taken down and packed up for the trip home.

The challenge is in determining the year’s “it” item. Last year, coloring books for adults were big. This year, Marshall banked on mini skillets. “That’s the exciting part for me, trying to guess what the public is going to want,” he says. “I’m a pretty good guesser, but there are always things that are very shocking.”

Case in point: the animatronic gassy snowman that has been a Christmas Mouse bestseller for the last two shows. It’s mind-boggling, Marshall says. But when it comes time to make Santa’s list, the big man has no accounting for taste.