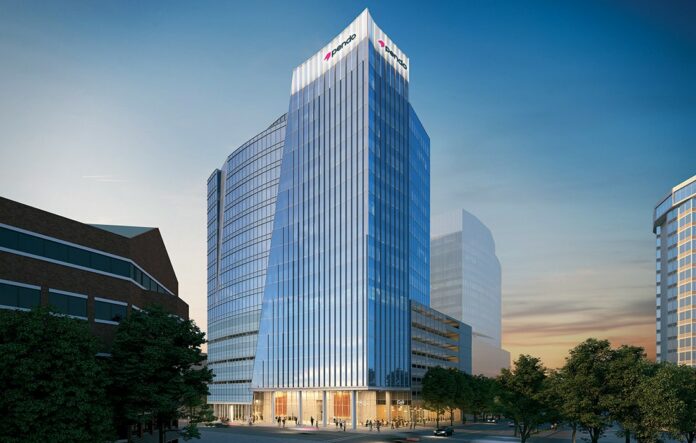 A random lunch table at this year’s “Pendomonium” event in Raleigh was populated by venture capitalists from the West Coast and users from across the country, a reflection of software company Pendo’s growing momentum. Nearly 1,100 attended the September gathering, up from 430 last year.

Investors are taking notice. Pendo announced on Oct. 17 that it had raised $100 million, bringing total capital invested to $206 million. The latest funding appraises Pendo at more than $1 billion, according to the company. Participants in the funding included longtime Pendo investor Sapphire Ventures LLC and new investors General Atlantic and Tiger Global Management, which is affiliated with famed hedge-fund investor and Salisbury native Julian Robertson.

Achieving unicorn status as a $1 billion startup puts Pendo in a league of 498 unicorns worldwide as of September 2019, valued at $1.8 trillion, according to Crunchbase Inc., which tracks startups. Privately held Pendo doesn’t disclose revenues, but Inc. magazine estimated its sales at about $21 million for the fiscal year ending Jan. 31. Co-founder and CEO Todd Olson says, “Revenues have been growing more than 100% a year,” while staff has also more than doubled to 370 as of October. Pendo has more than 1,200 customers who rely on its products to improve the performance of their software.

The company revealed several new products at its annual conference, including a new mobile offering and Pendo Explorer, which helps digital-design teams prioritize requests for new features. The new tool is a result of the May acquisition of London-based Receptive Software Ltd.

While Olson says no new deals are in the pipeline, more acquisitions are possible to improve Pendo’s competitive position. “You have to innovate. You have to be aggressive.”

Last December, Pendo said it would add 590 jobs in Raleigh over the next five years with an average salary of just under $87,000. In return for the $35 million investment, Pendo received pledges for $10.7 million in incentives from state and local governments. On Sept. 9, ground was broken on Pendo’s new headquarters building in downtown Raleigh. Boston-based The Fallon Co. is developing the building, which is expected to be completed in 2021. Pendo will occupy five floors and 125,000 square feet of the 19-story tower.

Founded in 2013, Pendo initially sold business-to-business applications to other software companies who used the tools to help improve product functionality and user experience. It has since broadened into new markets, including business-to-consumer. Current customers include Cisco Systems Inc., Citrix Systems Inc. and Salesforce.com Inc.

One early adopter, Cary-based operations-management software company Dude Solutions, has been a Pendo user since 2015. The company employs Pendo to track usage analytics for its software.

While Pendo has helped pioneer the market for the type of cloud-based tools it sells, it’s not alone. Olson expects more competitors to jump in, including big companies. At this point, however, he believes the Pendo platform has a sustainable position. While he anticipates more mergers and acquisitions in the sector, “hopefully, we’ll be the consolidator,” he says.

As an example of Pendo’s growth opportunities, Olson points to Burlington-based Laboratory Corporation of America, which uses Pendo’s technology to understand and enhance its online interactions with patients. “You wouldn’t think of them as a software company, but technology helps them improve the patient experience, and that’s important strategically,” Olson says.

“Today,” he adds, “every company is a software company.”