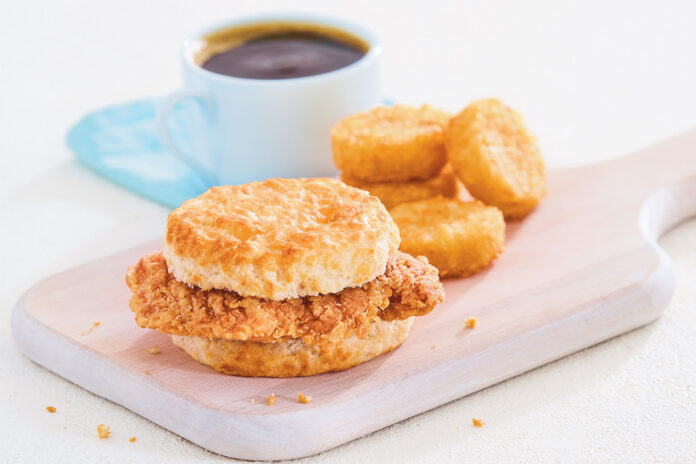 Jeff Rigsby is proof that franchisees can thrive even as ownership of the franchise itself frequently changes hands.

His Arden-based company opened its 100th Bojangles restaurant in May. That’s about one of every eight units in the 780-store chicken-and-biscuit chain.

Rigsby started his career with Bojangles as an area supervisor in Greenville, South Carolina, then launched his own franchisee business with six stores in the Asheville area in 2001. By 2015, the company had 50 locations. Growth accelerated when he bought 16 corporate-owned sites earlier this year.

His love for Bojangles’ food extends to the 1980s when his family traveled from Ohio to vacation at the Carolina beaches. Stops at Bojangles were a regular part of the experience.

“It has kind of a cult following. That’s what attracted me,” he says.

Rigsby started working for quick-service restaurants at 16 in Columbus, Ohio, the city where Dave Thomas started Wendy’s. After working for the corporate owner of KFC, he joined Bojangles in 1994 when it had about 200 restaurants. It was then led by a former KFC colleague, Dick Campbell, and owned by a California private-equity group. The business has since changed hands three times and operated as a public company for a couple of years. The corporate office has remained in Charlotte.

Private-equity firms Jordan Co. and Durational Capital bought Bojangles in 2019. “[They] want it to be more of a national brand, and I think it has that opportunity,” Rigsby says.

Rigsby is helping with that expansion, having bought the rights to develop 15 restaurants in the Columbus, Ohio, area. At press time, construction was expected to start on the first Bojangles in Ohio. It will be the sixth state in which Rigsby operates. Its biggest markets are western North Carolina and upstate South Carolina, including Clemson, where the chain gives a coupon for free sweet tea to the 82,000 who attend Clemson University football games, provided the Tigers score at least 28 points.

Bojangles’ leadership listens to its franchisees, he says. “They know that it’s great food that has brought us to the dance.”

The company also respects Rigsby. “Jeff puts his people and his customers first,” CEO Jose Armario says. “He has fully bought into the growing consumer preference for chicken and that gamble has paid off in a big way.”

His company expanded during the pandemic, opening four new stores and acquiring five more in 2020.

Like many in the hospitality industry, Rigsby says finding and retaining workers is more challenging than ever. His stores employ 4,000 people with starting wages of about $13 an hour, up from $10 before the pandemic.

“Our focus is on retaining employees by offering better benefits, having good managers and trying to help people advance their careers,” he says. “With the prices going up at gas stations and grocery stores, people are starting to see that, ‘Hey, I need to get back to work.’ The market will even itself out.”

Rigsby’s only equity partner is his wife, and he’s grown the business with limited debt. They live in a surburb of Spartanburg, South Carolina. One of his three sons works in the business, while he hopes his three grandchildren will sign on someday. “I think our brand is very strong,” he says. “There’s a craving all over the country for Southern food.” ■