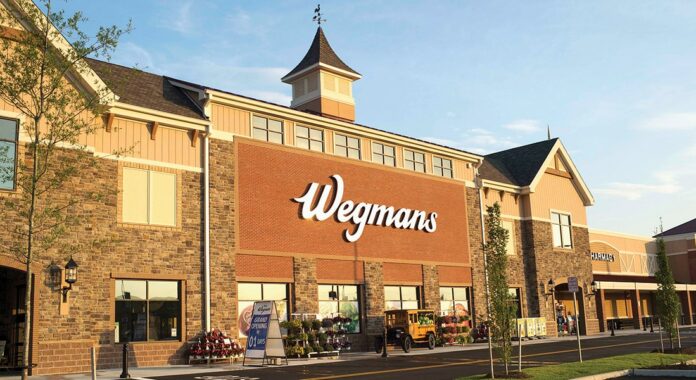 Opinion: Wegmans takes a slice of the market

Toward the back of the new Raleigh Wegmans supermarket sits a display case of cheeses overseen by Kristen Adams, a section manager. This is the third Wegmans Food Markets Inc. location where she has run cheese. She knows cheese.

“See the mist coming out on the cheese,” says Adams. I am trying to find the mist. “On the top there,” she points. And there — I can make it out now — is a barely visible fog. “It will help ripen the cheeses just until we sell them and send them home with people.”

I am on the front lines of North Carolina’s grocery wars at this cheese case, holding one of Wegmans’ most special varieties. Culinary bells and vittles are how Wegmans has staked its claim in one of three grocery segments — food as an experience.

It is the polar opposite of the Thunderdome segment of hard discounters, where Aldi elbows Walmart. The middle segment, where traditional grocers have operated for decades, is an increasingly barren place.

“Those are the Krogers of the world, the Food Lions,” says UNC Chapel Hill marketing professor Katrijn Gielens.

Food Lion has spent hundreds of millions to remodel 80% of its 1,000 stores in 10 states over the last five years. Kroger, saying there were too many grocers, pulled out of the Triangle in favor of its upscale Harris Teeter banner, as Publix invaded from the south and Wegmans entered from the north.

Wegmans, based in Rochester, N.Y., has a cult following, and Triangle suburbs are loaded with high-income transplants from New York and New England, making it an inviting expansion site. When Wegmans opened its 100th store in late September in Raleigh, 30,000 shoppers showed up on the first day. It’s big at 104,000 square feet, more than twice a traditional supermarket.

Five more stores are planned for the metro area, including two in Cary, where a dozen chains are clobbering each other with nearly 30 supermarkets, including nine Harris Teeters. The town’s subdivisions are saturated with expatriate Yankees who work at Cary’s biggest employer, software giant SAS, and at nearby Research Triangle Park; they know Wegmans.

Undoubtedly, Wegmans will move into other affluent North Carolina markets, says analyst Phil Lempert, editor of supermarketguru.com. “There’ll be one in downtown Charlotte,” he predicts.

The typical supermarket sells paper towels and condiments and national brands in the center of the store. Wegmans’ center is all fresh food, produce and meals — categories less vulnerable to robot-staffed, two-hour delivery competitors targeting a large chunk of the $700 billion annual U.S. grocery bill.

Seafood expert Rachel Stidham is hunched over an induction stovetop, pan-searing salmon. An educated customer is more likely to buy the whole works — the fish, the flour, the Wegmans private-label basting oil. The store is filled with private labels, which are more profitable than national brands. Wegmans’ peanut butter is at eye level on the shelf, a coveted position to catch customers’ attention.

Near the front of the store, where most grocers would stock national bread brands, bakery manager Brad Whitney markets Wegmans’ sourdough miche. It took 10 years working with farmers to get the grain right, he says.

Run-of-the-mill supermarkets don’t have a supply chain with a cheese cave upstream. Not an actual cave, but a 12,300-square-foot climate-controlled building where cheese is aged. It is overseen by the company’s cheese whiz — the correct title is affineur.

Unripened cheese comes in to Rochester and gets massaged and tweaked until it’s ready to ship to Adams, who will take it the rest of the way.

The cheese section in the Raleigh store is busy, even on a Thursday morning. “This is where the show is. Customers are gravitating to it,” says Hallie Johnston, the store manager who started with Wegmans when she was a teenager in Erie, Pa. Pointing to Adams, she says, “I have to have people like her in order [for customers] to understand what our points of difference are.”

The challenge will come from competitors for the same high-income customers such as Publix or Harris Teeter or a smaller but ambitious Whole Foods, purchased in 2017 by Amazon for nearly $14 billion. Amazon can figure out how to deliver 18-month aged prosciutto in an hour and has the technical ability to eliminate checkout. Walk in, walk out. The store’s sensors know what you got.

Amazon wants to build a Whole Foods a half-mile from Wegmans’ flagship store near Rochester. It is seen as Amazon’s shot across Wegmans’ bow. For the next decade at least, there will be no days off in the grocery industry. You’ll need to keep your brie wet and your powder dry.

Dan Barkin can be reached at dbarkin53@gmail.com.