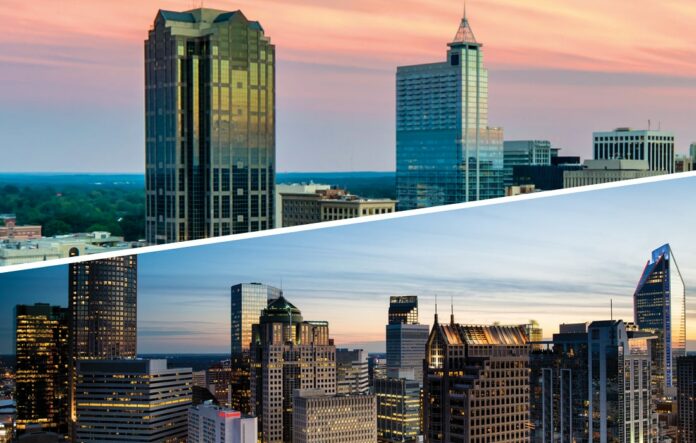 Opinion: Raleigh and Charlotte should be a twin bid for recruiting

When Amazon signaled it would choose two locations for its headquarters expansion, I thought instantly of what my son, a tech-savvy millennial, said back when the search was in its early phase and cities were arranging proposals.

Only one scenario would work for North Carolina, he said: Offer the Piedmont powerhouses of Raleigh and Charlotte in a twin bid — Raleigh for tech brainpower and Charlotte for administrative talent. N.C.’s two biggest metros together had the diversity of experience desired by Amazon, but each on its own lacked a well-rounded package.

Amazon moved on, the peculiar notion of a double-bid never explored. And why would it have been? Though only 170 miles apart, Raleigh and Charlotte might as well be on opposite coasts. Their brotherhood is that of Cain and Abel; their civic personalities orient to divergent poles.

There is nothing like the Philadelphia vs. Pittsburgh rivalry between the two cities. There is little antagonism, little friction. Their sibling dynamic seems to be that each politely ignores the other’s existence.

Raleigh’s gentle metabolism was established on the recession-proof industries of higher education, state bureaucracy and prisons. Well into the 1980s, it prospered as a sprawling suburban plantation with a fraying urban core. What civic rivalry it mustered was generally aimed at its well-educated and more bohemian neighbors, Durham and Chapel Hill.

Charlotte’s pulse has always beat faster. Energized by the confluence of railroad lines in the 1850s, the city has never since known a decade of flat growth. It is a business town through and through, rocked by boom and bust. Ready capital and shrewd leadership built its sky-scraping center city, visible from afar like a gleaming Emerald City sprouting from the red clay.

But Charlotte is perceived by many as having an attitude problem, a civic smugness that translates to arrogance. Its aspirational appetites have brought it NBA and NFL franchises, one of the nation’s busiest airports and a diversified, robust economy.

And yet in battles against the politically connected (and usually victorious) eastern side of the state, the region has long been chided as “The Great State of Mecklenburg,” a comeuppance that suggests the city seems a bit too big for its britches.

Conversely, as seen from the west, Raleigh and the coastal regions are rich with sleek highways and cultural benefits bestowed by benevolent overseers in the General Assembly. It took decades to construct Interstate 485, the highway belt around Charlotte, and on the city’s northern reaches, toll lanes are being built because the state claimed there was simply no other way to find money to expand I-77, North Carolina’s most congested interstate.

When the state art museum on the edge of Raleigh expanded in the early 2000s, the new exhibition hall was erected beside the existing building. It could have as easily been constructed in Charlotte — or Greensboro or Asheville — to make half of the state’s art treasures accessible to a new population. Instead, it remained part of the Raleigh hoard.

Other swat-downs of Charlotte in the legislature include the 2016 passage of House Bill 2, which vaporized a municipal ordinance extending discrimination protections to transgender individuals. When Mecklenburg County pushed a quarter-cent increase in the sales tax in 2014 for teacher raises, lawmakers in Raleigh thwarted the move by capping the rate at the existing maximum.

Frustrations cut both ways. When Raleigh-based Progress Energy was absorbed into Charlotte-based Duke Energy in 2011 as a “merger of equals,” Raleigh promptly lost the utility’s headquarters and whatever other equanimity was implied.

With their rapid growth and sprawling boundaries, it’s only a matter of a few decades before the Raleigh and Charlotte metro areas bubble into each other somewhere around Pinehurst.

It feels like time to reconcile the estranged brothers and to start marketing them together as a one-two punch in industrial recruiting. Although they stand back-to-back, it’s clear their strengths and weaknesses go hand-in-hand.