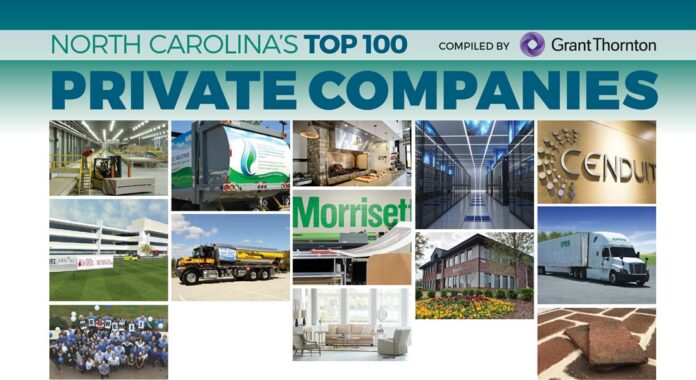 Prospects that Amazon and Apple will expand their strong N.C. presences with major new investments dominated the state’s business news coverage this year. But it’s the locally based, middle-market operators included in this year’s list of the state’s 100 largest private companies that drive North Carolina’s impressive growth. They collectively employ more than 107,000 people in a wide variety of industries.

An example is National Coatings & Supplies Inc., which distributes paint to more than 15,000 body shops, aircraft-maintenance companies, boat manufacturers and others. The under-the-radar Raleigh-based firm is controlled by O. Temple Sloan Jr.’s investment group. Sloan’s General Parts Co. appeared on the NC100 list for many years until its $2 billion sale to Advance Auto Parts in 2014. National Coatings, which has more than 200 offices in 38 states, nearly doubled its revenue in the last two years after acquiring a competitor, Roswell, Ga.-based Single Source Inc.

“Companies on the North Carolina 100 list are the backbone of our local economy,” says Dave Wedding, Charlotte-based managing partner for the Southeast region at Grant Thornton LLP, which compiles the list. “They are North Carolina’s top builders, innovators and creators.” Ownership ranges from families that have operated the companies for generations to private equity-controlled enterprises. Participation is voluntary.

The state’s boom in apartment complexes, distribution centers and university buildings is also evident, with general contractors including James R. Vannoy & Sons Construction Inc., Samet Corp., T.A. Loving Co. and Edifice Inc. moving up sharply. Charlotte-based Edifice has nearly doubled its payroll in the last three years and ranked No. 41 this year, compared with 54th in 2017 and 69th in 2016. Jefferson-based Vannoy & Sons has jumped from 28th to 18th in that period, posting more than $550 million in revenue.

SAS Institute topped the list, reporting 2017 revenue of $3.2 billion, a 1.25% increase from 2016, according to company reports. SAS employs about 7,500 people at its Cary headquarters. No. 2 Transportation Insight LLC, a Hickory-based logistics company, reported 2017 revenue of about $1.9 billion, a company spokeswoman confirmed. It has boosted its staff by 20% to 510. The strong housing market is prompting the company to reopen its Wilmington plant, which had closed during the 2009 housing recession. CEO Tom Nelson says the plant will reopen later this year, joining about 40 facilities operated by the second-largest U.S. gypsum board manufacturer. Nelson’s father-in-law, C.D. Spangler Jr., who bought the company for $1.2 billion in 1995, died in July. The 48-year-old company bought Denver-based Alpine Waste & Recycling in May, making Colorado the eighth state in which it operates and marking its first expansion west of Tennessee. The founding Poole family joined with two large private-equity groups to buy the business in 2017 from Macquarie Infrastructure Partners Inc., which had helped the company go private in 2008. The manufacturer is spending $10 million on an expansion in Indian-apolis, likely to create 75 jobs over the next several years. It will be the company’s seventh plant. “We picked Indianapolis because it’s a fine city and its proximity to major population cities,” says Robert Luddy, who founded the company in 1976.

Formed in 1995, the company offers more than 5,000 classes a year teaching people how to use software developed by Red Hat, Cisco and others. New York-based Rhone Capital LLC has owned it since 2014. The family- and employee-owned business started in 1947 with five people. Projects include bridges, dams, wastewater facilities and power plants. It is building a pedestrian tunnel connecting the N.C. State Fairgrounds and Carter-Finley Stadium in Raleigh. The founder’s sons Otis and Bill lead the firm. Opening offices in Charlotte in 2008 and Raleigh in 2015 has enabled the family-owned contractor to benefit from those regions’ strong economies. Education projects made up 47% of volume in 2017, a company newsletter notes. Norman Samet started the business in 1961, while his son, Arthur, has led it since 2000. Other projects include apartment complexes. Irvin Warren and a colleague started their business in 1976. In addition to Dunn, it has plants in Alabama, Arkansas, Illinois, Pennsylvania and Texas. Warren makes fluids for chainsaws, brakes and many other uses. The company that Denise and Ryan Legg founded in 2009 with five people now dispatches about 2,500 truckloads per week. While it operates a handful of rigs, most of its work is connecting truckers with shippers, including Walmart and Kroger. The growth is prompting a move to a bigger office next year that will include a gym, cafeteria and steam room. Penske Truck Leasing bought Epes Logistics’ sister company, Epes Transport, in July, but the deal does not include the logistics company that connects shippers and trucking companies. Epes Logistics was founded in 1989, two years after Alvin Bodford bought the business, according to FleetOwner magazine. Epes Logistics made six acquisitions between 2012-17. The late Bill Morrisette opened the paper and packaging distributor in 1962 and his son, Bill Jr., took over as CEO in 1992. Morrisette helps companies improve their packaging and make their facilities more efficient. It has operations in Charlotte, Hickory, Raleigh, Duncan, S.C., Roanoke, Va., and Honduras. The company dates to 1889, when J.C. Steele received a patent for brickmaking. Fletcher Steele, a cousin of the founder’s grandson, has been CEO since 1989. It has posted higher sales for seven straight years. Founded by Dan Schuster in 1998, Remi helps hospitals, government agencies and companies save money on equipment maintenance. Remi has boosted employment by 50% in the last year and expects to reach $100 million in revenue in 2018. When a client’s machine breaks or needs servicing, Remi oversees the repair company’s work and invoices.

$79 million AND UNDER
(latest fiscal year)

Psychologist Henry Scherich started Measurement in 1980 as a test-scoring company for state governments and other organizations. It has 14 offices in nine states and employs thousands of seasonal workers. The family-owned business, established in 1921 by James Harper Beall, makes upholstered furniture. Industry veteran Dixon Mitchell has led the company as president and chief operating officer since October 2017. Beall’s grandson, John Beall, chairs the board. Fairfield exports its furniture to customers around the world. About the Grant Thornton North Carolina 100®

Since 1984, the Grant Thornton North Carolina 100® has ranked the state’s largest private companies by revenue in the most recent fiscal year, based on data provided by the participants. The NC100 is a voluntary list restricted to companies based in North Carolina that do not have publicly traded stock. Companies owned by private equity are permitted. Nonprofits, financial-services companies, health care providers such as hospitals and subsidiaries of corporations are excluded. For more details, visit GrantThornton.com/NC100.

CLICK HERE TO VIEW A PDF OF THE SECTION

Use of natural substances leads revolution in N.C. orthopedic care