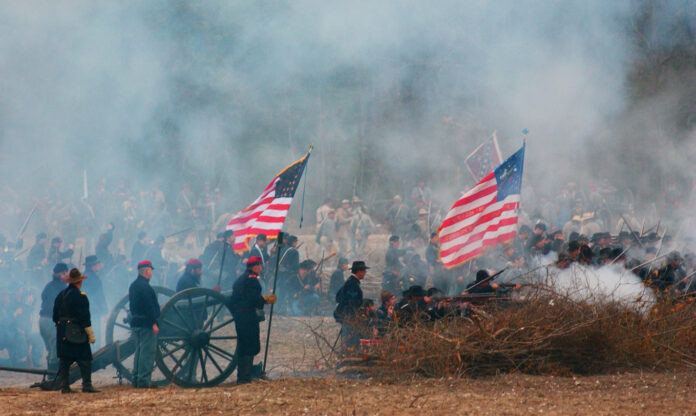 Colby Stevens, the 37-year-old site manager of the Bentonville Battlefield in eastern North Carolina, sits in his office on a hot May afternoon. A pair of Civil War rifles hangs on the wall, an 1858 Enfield, carried by the Confederates, and an 1861 Springfield, used by Union troops. A Confederate battle flag flies just outside the east end of the park. Its presence seems to annoy Stevens.

The site is seven years removed from the 150th anniversary of the battle, the last major action between North and South in the Civil War. Since 1990, Bentonville has marked the engagement with a quinquennial reenactment, the largest such event in the state and a significant source of tourism dollars for Johnston County. In 2015, it generated $4.7 million in visitor spending and a total economic impact of over $8 million, according to the Johnston County Visitors Bureau. There were 53,000 daily visitors, with about 14% of pre-ticket sales from out of state. Hotels up and down Interstate 95 were booked, representing 3,472 room nights across a four-county area.

By all accounts it is highly entertaining — two days of living history, marching troops, cannon fire and campfire talks. But these reenactments are not what they used to be, and nearly everyone agrees that if they are to survive, they have to change. The Old South symbolism fluttering in the breeze doesn’t help.

Perhaps the best-known recounting of the reenactment world is Tony Horwitz’s 1998 book Confederates in the Attic, which served more broadly as a meditation on race relations in America, past and present. Horwitz follows a hardcore reenactor to a series of battlefields in Virginia, eating hardtack, sleeping on the ground, and bearing witness to “bloating” (the grisly practice of pretending to be a battlefield corpse). This did not have the most salubrious effect on the reenactment industry. As Stevens puts it, people were “worried we’re going to give them dysentery or that they would have to be in first person all weekend.”

But, he hastens to add, that’s not the case. The Bentonville action is, as Stevens describes it, closely curated, an invitation-only event that involves “people we know and trust. Just because you have a cannon, you can’t just come down and shoot it,” he adds. The emphasis is on storytelling and, more and more, on including perspectives from all sides, both good and bad.

Patti Smith, president of Friends of the Bentonville Battlefield, charged with organizing the reenactments, puts it like this, “It’s important to hear the history. It’s not just playing army.”

A battlefield without a battle is just a field, but a good historian can make that ground come alive. Shelby Foote, a Mississippi native and UNC Chapel Hill graduate, was one of those. In his three-volume history of the Civil War, he said of Bentonville that “Seven Pines now had a rival for the distinction of the best-planned and worst-conducted battle of the war.”

In addition to poor execution, Seven Pines and Bentonville had at least one other thing in common: General Joseph Johnston (no relation to the county’s namesake) was in charge of the Confederate armies on both occasions. At Bentonville, Johnston’s 21,000 Confederates were opposed by about 60,000 federals under the command of William T. Sherman, who was making his way north from Atlanta to combine with Ulysses S. Grant in Virginia.

Uncharacteristically, Johnston took the offensive on the battle’s first day, attempting to isolate and destroy Sherman’s left wing before it could be reinforced. When that failed, Johnston was forced onto the defensive by Sherman’s superior force, a posture more in keeping with a record that had seen him backpedaling across a big swath of the South, from Tennessee and Mississippi to Georgia, before finally running out of ground in North Carolina. He withdrew from the field on March 21, having suffered about 2,600 casualties. He would ultimately surrender to Sherman at Bennett Place, outside of Durham, on April 26, 1865, 17 days after Lee surrendered at Appomattox.

At 2,000 acres, the Bentonville Battlefield is among the state’s largest historic sites by land area; the facility itself has five full-time employees. The reenactment is staged by a nonprofit group called Friends of Bentonville Battlefield, which contributes the proceeds back to the park. The funds are used to acquire land and otherwise improve the property. About $250,000 was raised by the 2015 reenactment, underwriting the addition of four new tour stops.

But as an attraction, the Civil War has been in decline, and the number of people visiting major battlefields has been trending downward for decades. A May 2019 Wall Street Journal story reported that the five major Civil War battlefield parks operated by the National Park Service (Gettysburg, Antietam, Shiloh, Chickamauga/Chattanooga and Vicksburg) had seen attendance decline by 70% from 1970 to 2018, from a combined 10.2 million to just 3.1 million. Gettysburg, the war’s most iconic battlefield, saw 2.6 million visitors a year in the 1960s and ‘70s; today it averages around a million.

There is lots of speculation as to why this is so: an aging Baby Boomer population, greater interest in more recent wars, social media, politics. Likely for some of these same reasons, Civil War reenactment has also been in retreat. For Bentonville, the 150-year anniversary of the battle stands as the most recent high water mark, drawing 4,500 “living historians,” as Stevens calls reenactors, including 2,000 from up north, a good turnout but well down from earlier years. In non-reenactment years, the park hosts about 50,000 visitors a year, mostly from in-state. Demographically, they are roughly 85% white and 15% black.

“The days of seeing 10,000 people in a field were over before [the pandemic],” Stevens says. “But the hobby is alive and well. You can read all day about cannons being fired but you can’t really experience it until you see it. Reenactments done properly can be a powerful tool.”

While the number of reenactors may have declined, interest in historical places and events remains strong. A survey by the National Trust for Historic Preservation found that 71% of Millennials “enjoy travel experiences that explore the history of an area,” with about a third of those polled characterized as “true believers” in historic preservation. Heritage tourism in North Carolina is a major industry: The growth in the number of visits to historic sites outpaces museums and even craft breweries, according to Visit NC, the state’s tourism promotion agency.

Still, the world has changed a lot since the 2015 reenactment, and the rise of social justice movements like Black Lives Matter has compelled a further reconsideration of these events. Monuments to the war are going down across the South, including North Carolina. How the war is remembered is now undergoing a major reassessment throughout the region, and the narrative is opening up to include new voices and new points of view from those who were once ignored or actively excluded. For Stevens, who came to the site in March 2019, the need to change comes down to a heightened focus on “why are we doing this?” The answer, as he sees it, is simple: preservation.

The 2020 event, ultimately cancelled due to COVID concerns, was to feature Carolyn Cole, a descendant of slaves who once lived on the property. She would have been a planning partner and speaker, part of an ongoing effort to provide a broader historical context to the battle. Cole traces her family history to the Cole Plantation, which was part of the battlefield and, before that, to the 1600s and Jamestown, Virginia. Cole’s ancestor, Levin Cole, is listed in The Early Architecture of Johnston County as the first former slave in Johnston County to have owned a house. She’s also said to be related to the great jazz pianist, Thelonious Monk, who was born in Rocky Mount and, more distantly, she says, to Nat King Cole.

In a March 2020 video interview, Cole discussed the battleground with the N.C. Department of Cultural and Natural Resources. “When I’m here, I connect to the pain, the suffering,” she said. “But I also connect to the fact that they were courageous and strong and survivors.”

Regarding the reenactment itself, she says, “We’re economically challenged in Johnston County. The reenactment is an opportunity to teach history and build awareness while having a positive economic impact on the county and the region.”

“We’re all learning more,” she adds. “To limit knowledge hurts everybody.”

Stevens believes the reenactment will go on, but it will look different — smaller scale and more inclusive. At the same time, plans call for the park to add new events that focus less exclusively on the battle and more on delivering an “old timey” experience to families and other visitors. This would include an annual fall festival designed to engage a broader swath of the community as well as to provide a more consistent revenue stream. That’s set to happen this fall. Stevens says the land the site occupies is “more than a battlefield, it’s a greenspace,” noting that the state’s Mountains-to-Sea Trail passes through the park.

More recently, the park hosted “Bentonville in Bloom,” a nature walk that attracted several hundred people, and “Heavy Thunder,” a demonstration of artillery fire that drew more than 1,000 spectators.

Bentonville was a battle that didn’t have to be fought in a war that had been long ago lost. As a bookend to Fort Sumter, it commands considerably less attention than Appomattox in Virginia, even though the army Lee surrendered there was much smaller than the one overseen by Johnston, which included soldiers still in the field in the Carolinas, Georgia and Florida. It was the largest surrender of Southern troops of the war and perhaps Johnston’s finest moment, according to Stevens. “Johnston’s most lasting contribution was that he ended the war,” he says.

For Johnston County and other reenactment sites, a lot is riding on the success of this reimagining — culturally and financially. At Bentonville, at least, the emphasis is firmly on preservation; there is no interest in courting controversy. “If you want to talk about politics in 1865, have at it,” says Stevens about the reenactments. “But we’re not going to discuss presidential politics today.” ■