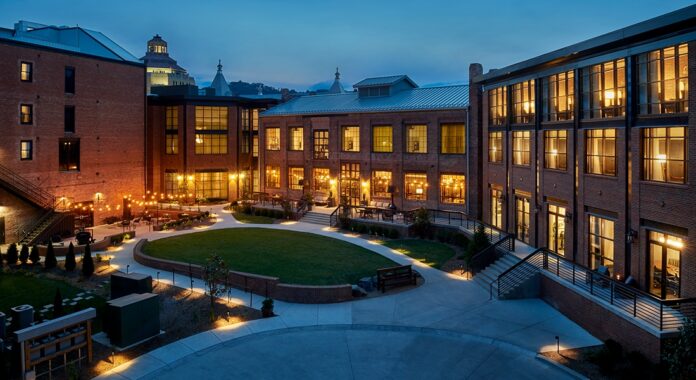 The Foundry Hotel Asheville, which opened in November, is one of many historic hotels across the state that appeal to out-of-town visitors. It houses a spa, fitness center and 100-seat restaurant.

With mountains and beaches, breweries and outdoor excursions, big cities and quaint towns, it’s not surprising North Carolina’s travel and tourism industry is booming and is expected to
continue to grow.

According to the N.C. Department of Commerce, the state hosted more than 51 million visitors in 2018; tourists spent $25.3 billion and generated about
$3.9 billion in federal, state and local taxes that year.

Organizations such as Visit North Carolina, a unit of the Economic Development Partnership of North Carolina, work specifically to drive up these numbers by promoting some of the events that make the state unique. The below list highlights a few of the businesses and events across the state that are drawing locals and out-of-town visitors alike.

Food Fanatics
Many know Asheville for its craft-beer scene, but the local food industry is another reason Buncombe County attracted 11 million visitors in 2017, according to the Asheville Convention and Visitors Bureau. In 2019, the city launched Chow Chow, a festival celebrating chefs, brewers, farmers, artists and craftspeople.

Chow Chow 2020 will take place Sept. 10-13. Attendees will have access to tastings, chef demonstrations and other hands-on experiences. Situated in the midst of the Blue Ridge Mountains, last year’s festival included outdoor yoga with beer, a Biltmore wine tasting and glassworks shows.

Girl Power
With greats like Penelope Barker, an American Revolution activist who organized the boycott of British goods during the Edenton Tea Party; Tiny Broadwick, the first woman to jump out of an airplane; and Christina Koch, the N.C. State University grad who set the record for longest single spaceflight by a woman, North Carolina has nurtured a long line of women achievers and role models. In honor of the 100-year anniversary of the 19th Amendment ratification that granted women the right to vote, travelers are invited to connect with famous female figures through the She Changed The World Traveling Exhibit passing through the state this year. A full tour schedule can be found on the N.C. Department of Natural and Cultural Resources website at
ncdcr.gov.

Vino Visits
Interest in wineries across the state continues to grow and appeal to an upscale travel audience, according to Wit Tuttell, executive director of Visit N.C. About 1.9 million wine-related tourists visited North Carolina in 2018.

The Crest of the Blue Ridge Henderson County, approved as an American Viticultural Area last July by the U.S. Alcohol and Tobacco Tax and Trade Bureau, encompasses four wineries and more than a dozen vineyards in a scenic stretch along the Eastern Continental Divide. The designation recognizes the grape-growing region as having distinguished features that set it apart from others as a high-caliber region for wine.

Historic Hotels
Asheville’s tallest high-rise and three foundry buildings are finding new lives as boutique hotels. The 18-story BB&T Building was reborn as Kimpton Hotel Arras on Oct. 14, 2019. With 128 rooms, the hotel has a laid-back yet luxe feel with local artwork. Asheville chef Peter Pollay is responsible for the ground-floor bar and restaurant, boasting Mediterranean-style food.

A few blocks away, the 92-room Foundry Hotel Asheville opened in November. It incorporates two new buildings plus three structures that forged steel for Biltmore Estate and structures from Asheville’s original building boom. The property includes a spa and fitness center, a lounge with a library and fireplaces, and the 100-seat Benne on Eagle restaurant. The eatery features a menu by James Beard nominee John Fleer and rising star Ashleigh Shanti.

Events, new businesses and exciting changes like these and others are why North Carolina continues to be a destination for many.