Before the last recession hit a dozen years ago, North Carolina’s banking industry was riding high with 22 locally based banks with more than $900 million in assets. Bank of America, Wachovia and BB&T appeared poised for rapid growth.

Now, after a decade of economic growth, our state enters another downturn with a smaller, well-capitalized industry. While BofA, recently merged Truist Financial, and First Citizens Bank have thriving franchises, North Carolina banking is otherwise mostly dominated by lenders domiciled elsewhere. Business North Carolina’s annual list of the 50 largest banks and credit unions based in the state includes 11 banks with at least $900 million in assets.

Here are some insights gained from this year’s list, which is based on data from S&P Global Market Intelligence.

Not much change: For the second straight year, the list involves very few changes, following the transactions in 2017-18 that put out-of-state owners in charge of seven large N.C.-based community banks such as BNC Bancorp of High Point and Capital Bank Financial of Charlotte.

The main departure in the last year was Franklin-based Entegra Financial, which had ranked No. 15 but was acquired by Raleigh-based First Citizens BancShares. New to the list is Dogwood State Bank, which raised $100 million as it recapitalized Morehead City-based Sound Bank. We also added Greensboro-based Vizo Financial, a corporate credit union. Another startup, Triad Business Bank of Greensboro, opened in March and will be on the list in 2021.

In the black: Dogwood was the only institution to report a loss last year, reflecting startup costs. Seven banks had a return on assets of more than 1.5 times the previous year. Mount Olive-based Southern Bank reported a 2% return that was skewed by investment portfolio gains.

Modest growth: Most banks didn’t grow much amid concerns that the long bull market in real estate, stocks and business valuations was looking tired. Only five banks reported revenue gains of at least 10%, led by Rocky Mount-based First Carolina Bank, up 51%. First Carolina, which has jumped from No. 47 to No. 33 in the last two years, added a wealth management unit and is expanding into Wilmington.

Crowded field: That modest growth also reflects that North Carolina is among the most competitive banking markets in the U.S., says Wendell Begley, chairman of the N.C. Bankers Association and CEO of Black Mountain Savings Bank. His seven-employee bank has $41 million in assets, missing the top 50 list. Industry giants JPMorgan Chase and U.S. Bancorp are planning retail bank expansions in the state’s biggest markets.

Filling the void: Many N.C. credit unions are growing faster and operating just as profitably as for-profit banks, based on their return on assets and equity. Nine of the 20 largest N.C.-based financial institutions are credit unions. While industry giant State Employees Credit Union paused on growth, Coastal Federal, Truliant, Allegacy Federal and Self-Help credit unions each reported revenue gains of 10% or more.

Penalty box: Though technically based in San Francisco, Wells Fargo’s biggest employment center is in Charlotte, and it holds a large market share in North Carolina. (Some expect new CEO Charlie Scharf to move the main office to the Queen City.) But the bank, mired in sales-practice scandals in recent years, is restricted by regulators from growing. That has created opportunities for rivals to take clients away from their peer. 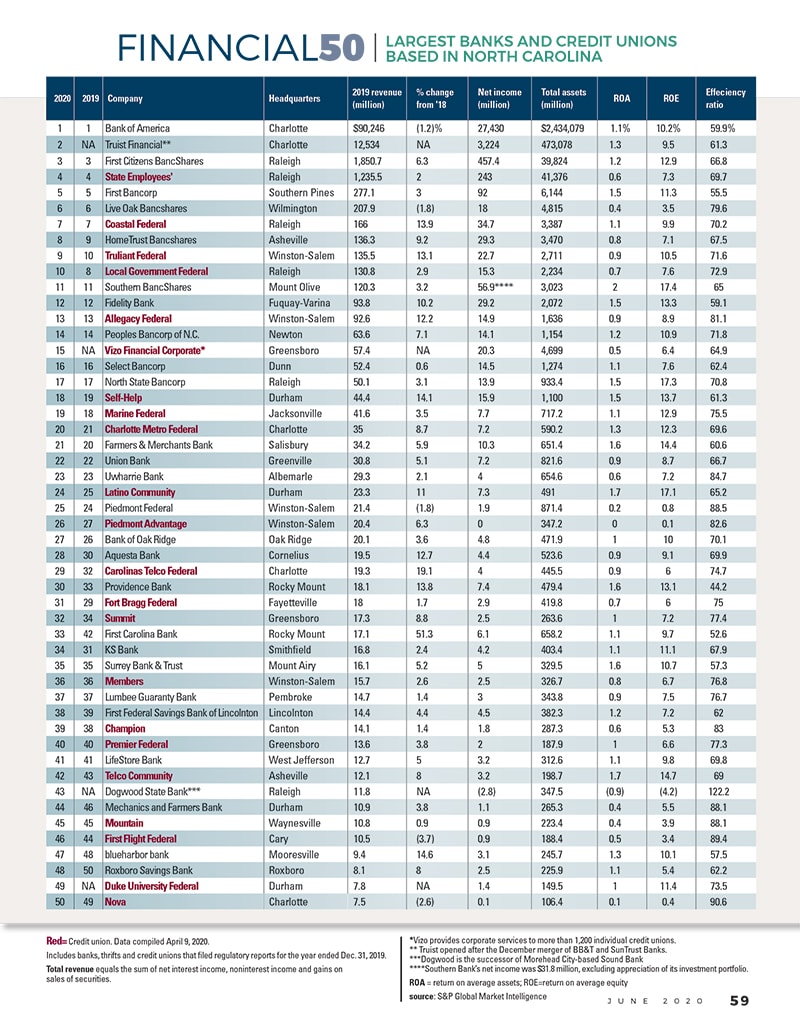