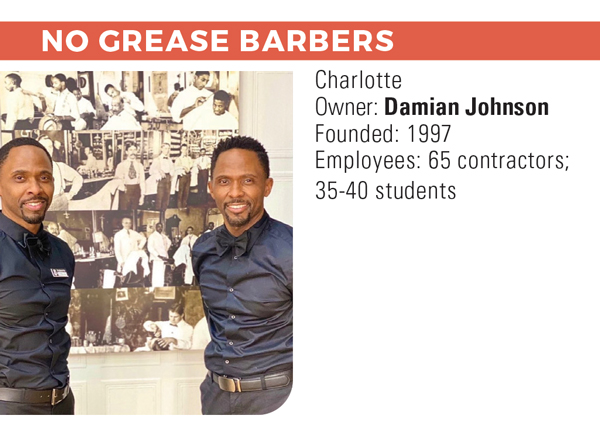 Founded by twin brothers Damian and Jermaine Johnson, No Grease Barbers has experienced success since a humble start in 1997. The Johnsons secured their barber licenses by age 18 and were acquainted with the industry because their mom was a stylist. The business grew out of Damian’s senior paper about strategic marketing in the barber industry for a class at Charlotte’s Johnson C. Smith University.

Today the brothers are 49, and No Grease has 12 locations in the Carolinas and Georgia. They started offering franchises in 2017 with four locations now run by others.

A year earlier, they started the No Grease Barber School to provide hands-on experience and intensive education enabling students to make a successful transition to the profession.

“A big part of our growth is when we started to focus on the education side,” Damian Johnson says. “We were influencing the future of the business.”

Viewing their work as a mission is also critical. “Whether we are making people look good from the outside or those things that are intangible — things that you can’t see or touch — we’re affecting people in a positive way,” he says. “Whether it’s the client in the chair, the barbers that we train or the entire community. Those are the things that get me excited every day, the people that we affect.”

Staying true to some traditions of the African American barber industry is an important aspect of the business.

“It’s holding true to some of those things and adding in creative marketing and strategies, from professionalism, to our image that we’ve always demonstrated with our barbers, to community involvement,” Johnson says. “We still know that we were that lighthouse of the community, and we’ve used that as a main strategy.”

Future plans include expansion to the suburban Washington, D.C. area with another location opening as early as the first quarter of this year.

“We’re not going to stop until we have made this one of the most successful businesses that has ever been seen in the barbering industry — beyond the barber industry, just Black businesses period,” he says.