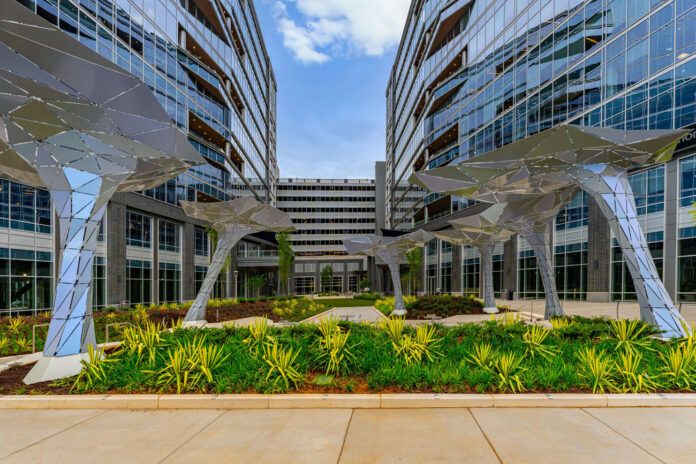 As it developed two 11-story buildings near downtown Charlotte, Spectrum Companies promised that it would create an urban park that could become the South End neighborhood’s “outdoor living room.”

This week Charlotte-based Spectrum unveiled the centerpiece of the 1-acre park, a large metallic sculpture designed by artist Ivan Toth Depena. Beyond its artistic appeal, the six 16-foot-wide aluminum composite canopies making up the “Aurum” sculpture will serve as shade for office workers and others taking a break or having lunch in the area.

“It’s the focal point for us as we designed Vantage South End,” says Spectrum CEO Steve McClure. “It’s one of the unique aspects given the amount of land we had and it turned out better than we expected.” 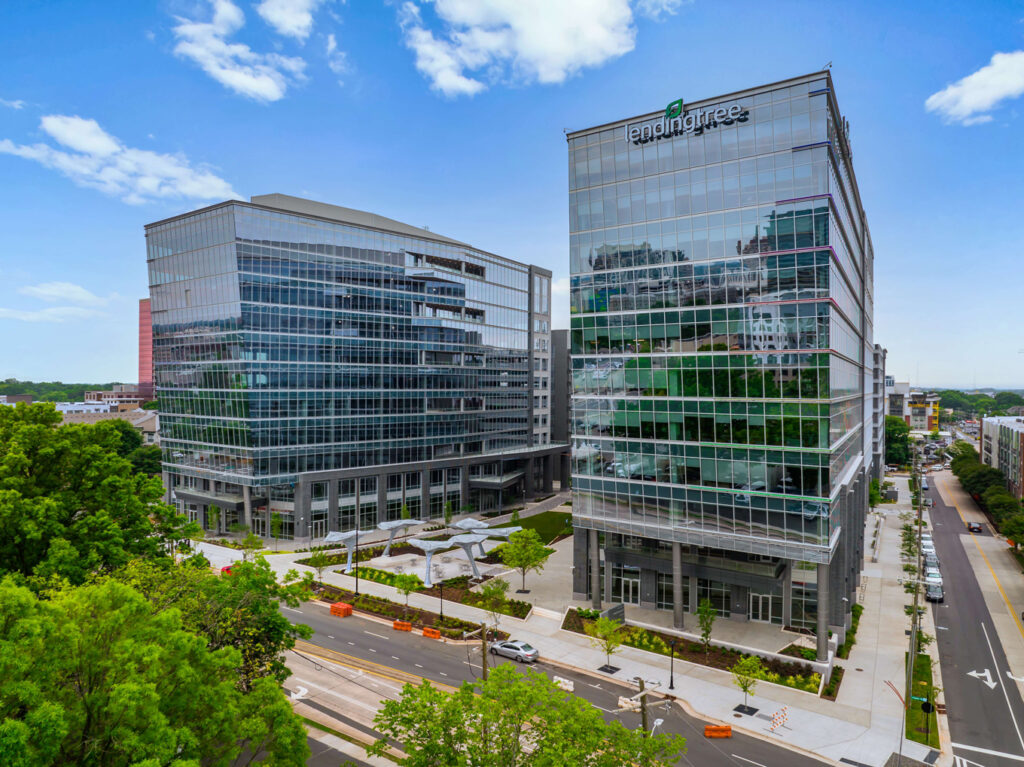 Depena and his family moved to Charlotte from New York City in 2014 for a residency at the McColl Center, and has since developed a design business in the city. He was selected to design a much-anticipated retail walkway that will connect the Uptown and South End neighborhoods, with a scheduled opening in 2025.

Spectrum, which has a $2 billion real estate portfolio leased or under management, opened Vantage South End with a West tower about a year ago. Lead tenants include LendingTree’s headquarters and the Grant Thornton consulting firm.

It then started construction of the adjacent East tower in 2020, overcoming pandemic jitters. That tower opened last month. The two buildings total about 635,000 square feet with about 111,000 remaining for lease. Spectrum partnered with Invesco to develop the project.

South End originally developed as a residential hotspot with lots of apartments appealing to office workers who could walk or take the light rail to Uptown offices. It’s also become known as a major brewpub center.

But the Dimensional Financial Advisors and Railyard buildings showed the appeal for offices in the area, McClure notes. Large office projects are planned within a block of Vantage South End: One is by Charlotte’s Crescent Communities and Nuveen Real Estate and the other is by Chicago-based Riverside Development and Investment. Ground hasn’t been broken, but McClure expects both projects to succeed.

At Vantage South End, “we believe retail on the ground floor is key to the success of a project, so we were very selective in curating the retail base,” he says.

So the park is next to a wine-country inspired restaurant called Sixty Vines and a 14,000-square-foot restaurant called Culinary Dropout, which is being developed by Sam Fox, a James Beard-nominated restaurateur. Other sites slated for the development include Yolk by Beard-nominated chef Greg Collier, a deli called The Good Wurst Company, and whiskey-cocktail bar Dram & Draught.

Depena says he worked closely with Spectrum and Charlotte landscape design firm LandDesign on the Aurum project, which is his largest corporate installation. “Artists may often  rebel against working with a developer, but this was not an uphill battle. They were pretty hands off and encouraging. I’m very much about encouraging collaboration.”

Spectrum commissioned works from five other local artists for Vantage South End, including a mixed-media piece by Maja Godlewska, an associate professor at UNC Charlotte, and a trio of paintings by Shaun Cassidy, whose artistic metal leaves are installed at 10 stations along the Lynx Blue Line light rail service. Godlewska, Cassidy and Depena each had residencies at the McColl Center.