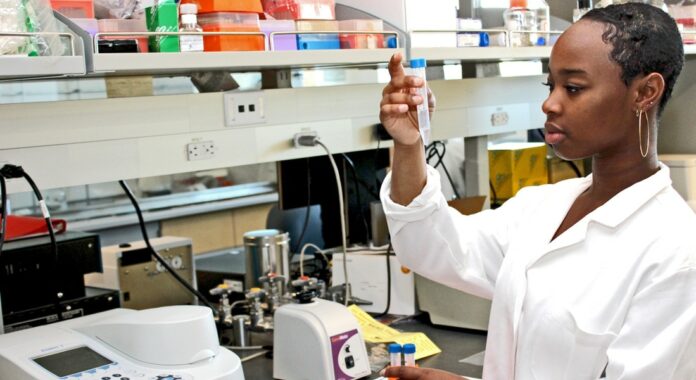 An ECSU student works in the biology research laboratory on campus. The university has seen a huge enrollment boost since N.C. Promise was instituted. Enrollment confirmations for the fall semester are up 56% from last year, says Robert Kelly-Goss, director of external group relations. Yara Abumohsen, a 21-year-old junior at UNC Pembroke, dreams of becoming a doctor. Med-school applications aren’t the only thing that she has to worry about, though. While Abumohsen is currently on a full-tuition scholarship, she still has to find a way to pay for books, her commute from her family’s home in Lumberton and other living expenses. Various part-time jobs such as tutoring help pay the bills, but they take time away from her studies.

Abumohsen hopes she will have more time to pursue her interest in nephrology, the study of kidney care and diseases, with the state’s new cut-rate tuition program starting this fall. She will get a portion of her scholarship back to help pay for the extra expenses besides tuition.

“The majority of my friends take out loans or pay out of pocket,” Abumohsen says. “[The tuition plan] is going to make a difference for a lot of people on campus.”

The N.C. Promise Tuition Plan aims to make the university experience more affordable at three North Carolina campuses — Elizabeth City State University, UNC Pembroke and Western Carolina University. In-state tuition will cost $500 per semester, while out-of-state tuition will be $2,500 per semester. The tuition reduction will apply to all undergraduate students, including those from other nations. Student fees, along with room and board costs, will remain the same. Lawmakers set aside approximately $51 million to make up for the loss of tuition income due to the plan.

“[The N.C. Promise Tuition Plan] will help us select academically competitive students,” says Robin Cummings, the Pembroke chancellor who formerly led North Carolina’s Medicaid health- insurance program. “It will broaden our pool of applicants and allow us to see how we want to shape our future classes.”

Making higher education more accessible to students of all economic backgrounds is a priority of the 17-campus UNC System. Affordability is a key factor: The national average in-state tuition for a public, four-year college for the 2017-18 school year is almost $10,000, according to the College Board. For out-of-staters, the price tag is $25,620. Meanwhile, North Carolina college graduates in the class of 2016 have an average debt of about $25,600, according to the Institute for College Access & Success.

“I emphasize to [high-school students] about being careful about going into debt,” Cummings says. “If you’re like most of the students we have here with a majority receiving Pell Grants, which is an indication of financial funding need, it’s important that N.C. Promise is going to allow us to offer them a quality education at a lower cost.”

State officials picked the three participating institutions for various reasons, including their locations in different regions of the state. Attracting more applicants is critical for Elizabeth City State, a historically black university that has seen enrollment decline by about 60% since 2010. About 1,400 students were enrolled for 2017-18, the first increase in seven years, and enrollment confirmations for the fall semester are up 56% from last year, buoyed by N.C. Promise, according to Robert Kelly-Goss, director of external group relations.

WCU hasn’t had any problems with recruitment, with the number of students at the Cullowhee campus increasing five of the last six years. Total enrollment surpassed 11,000 last fall for the first time in the school’s history, up 2.1% from a year earlier. Acting Chancellor Alison Morrison-Shetlar says the school has already received more than 19,000 applications from first-time students for the fall semester. Partly because WCU officials expected the high volume, the school cut off submissions in February, a month earlier than the previous year. “We have had forward and upward momentum over the past few years,” Morrison-Shetlar says.

Enrollment at UNC Pembroke peaked in 2010 at 6,944 but has since declined to 6,252. Officials hope the new program will help boost enrollment numbers. The university has already seen a huge increase in web traffic from both North Carolina and bordering states since it started marketing N.C. Promise.

At Pembroke, completed applications have been consistently higher than in prior years, including a major increase from transfer students, Cummings says. The school accepted 375 transfer applications through mid-March compared with the 181 transfer applications a year ago. With enrollment now at about 6,260, Pembroke expects to reach as many as 8,500 students over the next decade.