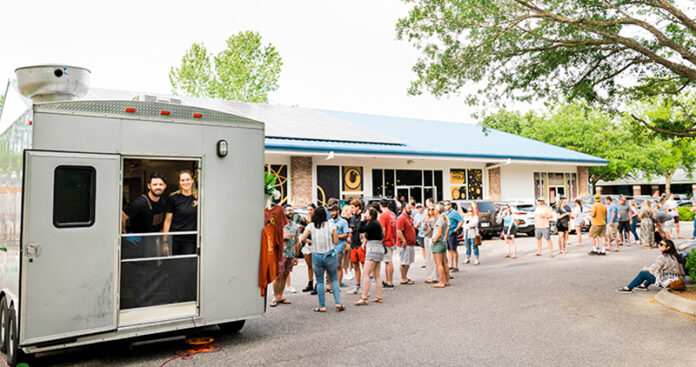 For CheeseSmith owners Molly and Brendan Curnyn, their quest for success in the food business didn’t start on land.

“I started working in yachting in 2013,” Molly says. “A cousin of mine is a captain. I went down to Fort Lauderdale, [Fla.,] and helped on a 150-foot boat going from there to St. Thomas, [U.S. Virgin Islands]. I felt like I had hit the lottery. One year later, I worked on a 106-foot boat going to St. John, St. Martin, Tortola, Bermuda, most of the Bahamas and Antigua.”

Alongside her now-husband, Brendan, the two held various positions on privately owned yachts, including stewardess and deckhand. Molly got her first taste of the food industry after a disappointing meal; the yacht owners were so upset they sent the chef packing in the middle of the night.

They turned to Molly and asked, “Can you cook?” She replied, “I guess.”

For Molly, cooking was an interest turned passion. She taught herself how to cook by watching The Best Thing I Ever Ate in her cabin whenever she had free time.

When CheeseSmith food truck opened in 2018, a cult-like following emerged immediately, with lots of demand from hungry customers. Luckily, the two had familiarized themselves with sourcing alternative power and problem-solving on the fly and had a strong work ethic from grueling, nonstop labor while at sea. Brendan worked the grill, while Molly developed recipes and operated the cash register.

“Boat power and food truck power are the same thing; generators are the same thing,” Molly says. “It’s all about thinking on your feet and solving problems. One boat I was a chef on, we pulled into a marina and had no power. I still had to make dinner — there [were] eight guests paying. I made a no-bake pie and scallop carpaccio. It was all madness.”

While working on the high seas has its perks, after three years of yachting, Molly and Brendan were ready to move on.

“The drawbacks are missing holidays with family, spending time in places that don’t even have cell service to stay in touch with friends and family,” Molly says. “We were ready to return to a more normal life.”

The couple picked Wilmington because of its mild climate, happening beer scene and proximity to the beach. Though they had left their on-deck jobs behind, they concluded that even a food truck should be a hospitality experience.
“We try to connect to every customer in some way,” Brendan says. “That’s a little thing that makes a big difference; that’s why you’ll come back.”

Inspired by a love for traditional grilled cheese with tomato soup, the aptly named OG became their flagship sandwich. It ironically spawned from Molly’s disdain for the low-quality tomatoes found outside her home state of New Jersey. Boiling down, concentrating and adding spices gave the balance of earthy and sweet to the jam.

The devil was in the details, including sourdough that mimicked white bread and even their Smith Sauce served with black truffle fries. Weekly specials like the Brie-topped Honey Pot paired with a personal approach to marketing piqued consumer demand. Wherever CheeseSmith went, a crowd followed.

“Bobby Flay said, ‘If you don’t want to eat it again, why is it on your menu?’” Molly says. “So many places here have these huge menus with mediocre food. It’s lunch, it’s fine, but I don’t care if I eat it again. In the food industry, you have to want it again.”

The show Molly watched daily in her boat cabin to learn how to cook later signified her food truck’s success when CheeseSmith was featured on The Best Thing I Ever Ate.

“I was nominating dishes for an episode called ‘On Wheels,’ and I knew that literally the best thing I had ever eaten from a food truck was the Buffalo Baby sandwich. It was a no-brainer,” Slater says. “A lot of people have the passion to open a food truck, but they nailed the execution and were so deserving of that spotlight.”

After building a mobile following, the Curnyns opened a 50-seat brick-and-mortar location with indoor and outdoor dining in Wilmington’s Cargo District in July. The couple hopes to add cold sandwiches and a brunch menu. CheeseSmith has quickly become popular, which is a good thing because the Curnyns sold their food truck.

“One of the best parts about food is that it often brings us back to childhood memories,” Slater says. “Taking a comfort food or something familiar and putting a twist on it will never get old. Who doesn’t love grilled cheese?” ■