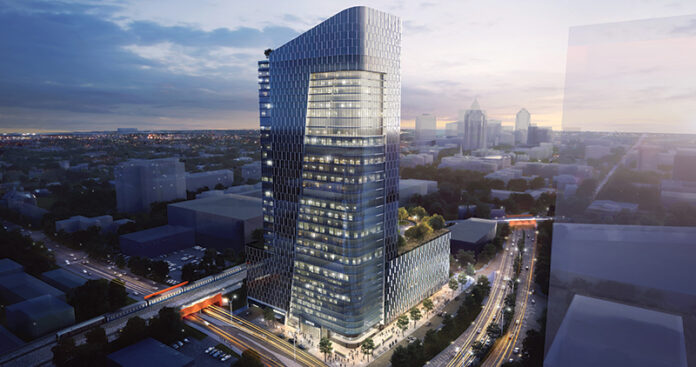 Downtown Raleigh has become a sea of construction, with new, towering projects in various stages of development looming overhead. Some developers, including Landon Zimmer, are hoping to add to the skyline, eyeing proposed buildings as tall as 40 stories — big even by Raleigh standards.

Zimmer is a managing partner of Wilmington-based Zimmer Development, a commercial developer founded by the family that launched the Reeds Jewelers chain in 1946. The real estate business includes a wide portfolio of retail, apartment and student housing projects. At one point, Zimmer Development was Food Lion’s largest landlord. In its home city, Zimmer Development is working with New Hanover County on plans for a new library and museum complex that will include residential and office space.

But the company has always wanted to do a project in downtown Raleigh, says Zimmer. Its vision includes a 40-story tower with retail, office and residential space on a 3.3-acre site at the corner of Peace Street and Capital Boulevard.

“We really are bullish on the city and downtown,” he says. “We love the property.”

The company is studying how the impact of COVID-19 will affect demand for office space. Wake County continues to attract new companies and residents, offsetting some of the work-from-home drag on commercial leasing. Like most developers, Zimmer is seeking a large tenant.

There’s actually enough land at the location, he says, for two towers. “That’s not in the plan, but it’s a possibility.” The company has approval from Jacksonville, Fla.-based railroad company CSX for a walkway over the tracks that run at the back of the property.

Over the past decade, construction has been constant in downtown Raleigh with once-overlooked properties receiving renewed interest. The boom has pushed outward toward downtown’s edges — the Warehouse District, Glenwood South — and more recently, on the north side of downtown, along Capital Boulevard and Peace Street.

On the west side of Capital, across from the Zimmer site, John Kane developed the sprawling Smokey Hollow complex of offices, luxury apartments and a Publix supermarket. Around the corner from the Zimmer site, on the east side of Capital, the $300 million Seaboard Station expansion is adding hundreds of apartments, as well as retail and restaurants.

The Zimmer family has been active in North Carolina for 75 years. After World War II, veteran William Zimmer and his wife, Roberta, settled in Wilmington and bought a jewelry store downtown. They named it Reeds, which was the name of a jewelry business his family operated in the Buffalo, N.Y., area. The Southern, separate Reeds has grown to span 13 states under the leadership of one of the Zimmers’ sons, Alan. Landon and other generations of Zimmers have learned the business by cleaning display cases and waiting on customers from a young age. It was a public company from 1986 to 2004, when it returned to family ownership.

In 1989, Bill and Roberta’s other sons, Jeffrey and Herbert, started Zimmer Development. The company and its partners have developed more than 260 projects in 140 cities. Bill and Roberta’s daughter, Arlene Schreiber, is director of leasing. (Bill and Roberta’s children honored their parents with a gift to help fund the Zimmer Cancer Center at New Hanover Regional Medical Center. It opened in 2000.)
The third generation in the development business includes Landon (Herbert’s son), as well as Emily Zimmer Moree and Lowell Zimmer (two of Jeffrey’s children).

Landon Zimmer, who handles market selection, project development and strategic planning, has undergraduate, law and MBA degrees from Duke University. He is a member of the state transportation board.

Keeping one family business going for generations is a huge challenge, let alone two of them.

“We see each other a lot socially,” Landon Zimmer says, “but we have to have organized times where we talk about business. [We] still have a good time and enjoy each other’s company, but it’s a little more focused on business and keeping things organized and keeping things together. I kind of owe [his cousin] Genna Zimmer, who works at Reeds, for being the steward of that.”

One of Zimmer Development’s biggest projects was Mayfaire, a 400-acre mixed-use district with retail and residential in Wilmington that opened its first stores in 2004. The Zimmers developed it with H.J. Brody and BrodyCo of Greenville. The partners sold Mayfaire Town Center and the Mayfaire Community Center in 2015 to mall developer CBL for $192 million. It was a good time to sell a shopping center.

Timing is important in the development business, especially with 40-story office towers. Zimmer Development can “proceed at our own pace and at our own design,” Zimmer says.

“There’s no timetable for us. When we have the perfect layout and, I guess, opportunity, that’s when we’re going to proceed,” he says. “There’s no rush on our behalf. We don’t need to move. We plan on that building being there a long time. A year or two, in the long run, isn’t going to really dictate our moves.” ■