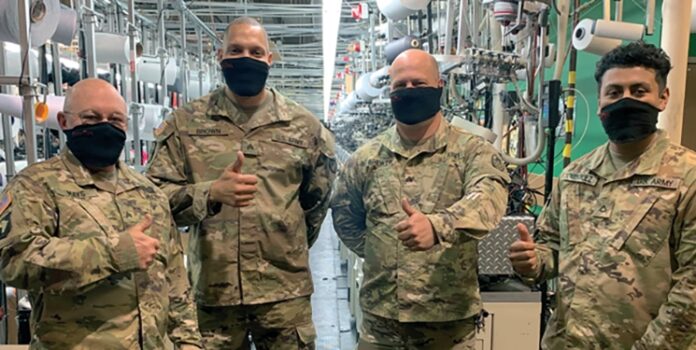 With slumping sales of their core products, nimble manufacturers learn to improvise at lightning speed during the pandemic.

The new year dawned hopefully at Thorlo in Statesville. For more than 200 employees, an expanding repertoire of specialized, cushioned socks that began during the running boom of the 1980s had grown to nearly three dozen and promised steady paychecks. Then came the COVID-19 pandemic — the layoffs began in April, and soon the plant closed.

The employees are back now, and the knitting machines are running again. Thorlo still makes socks, and a promotion in which it donates a pair of its “12-hour-shift” socks to health care workers when online buyers tick a box has exceeded 1,300 pairs, worth $20,000 or so. But Thorlo is turning out more than socks.

After an early-April scramble, its engineers devised a nylon and polyester blend with antimicrobial copper, coming up with Face Tek coronavirus protective masks. By early July, 104,000 had sold at $12.99 each, or more than $1.3 million.

“We didn’t know what to expect,” says Marketing Director Jeff Lawson. “We were hopeful it would keep the ship above water, and it certainly has.”

In Raleigh, officials of the N.C. Manufacturing Extension Partnership, NC Chamber and N.C. Department of Commerce say the coronavirus is prompting businesses to adapt at an unprecedented pace. Companies such as Thorlo are being forced to innovate or perish in a crucial period for the state’s 470,000 industrial workers and $100 billion-plus annual manufacturing economy.

Few can equal the textile maker that is Anson County’s largest private employer. Hornwood, founded in Lilesville in 1946, faced a dire future, says President Chuck Horne. The company’s tricot warp knitting technology is different from circular knitting used in products such as T-shirts. “We sell the finished fabrics, and the markets we serve are varied, such as the athletic market for on-field stuff like football uniforms, fabrics that go into water-filtration systems, fabrics for interiors of cars and some apparel fabric for the military.”

Overnight, those sales dried up, except for water filtration. But Hornwood was deemed an essential industry because of its military and water fabrics. “Our business just tanked, but we had to stay open and running,”

Horne says. “We didn’t have enough business to keep the doors open. Early on, we’d gotten into fabrics for face masks, but a little bit goes a long way when it comes to those.”

Another market was looming: protective isolation gowns for health care workers. Hornwood researchers focused on its tricot warp knitting specialty. “A number of other folks were trying to do things using circular knitted fabrics but just couldn’t make them pass the water-resistance test. So we engineered a fabric using our existing equipment that gave you all the properties you were looking for — a very soft hand to the touch, yet water resistant.”

Hornwood typically produces about 300,000 yards of material a week. While the medical fabric might make up a relatively small part of that, demand for the medical-gown material, sold to cut-and-sew industries, has allowed it to rehire most of the 22 employees it had laid off.

“We’re busy as bees making that particular fabric,” Horne says. “To be honest, it has been a lifesaver for us.”

COVID-19 is also sparking innovation. Though still using its time-tested technology, Horne’s new application works so well that the company has applied for a patent.

In Statesville, Thorlo’s Lawson says his company was uncertain how to market its newly minted face mask. “It had never been done before. So, we tried satellite radio” such as Sirius XM. “We have found it very effective. The response has been very strong.”

Those sales underscore possibly the base lesson of COVID-19. “That market didn’t exist three months ago,” he says. ■