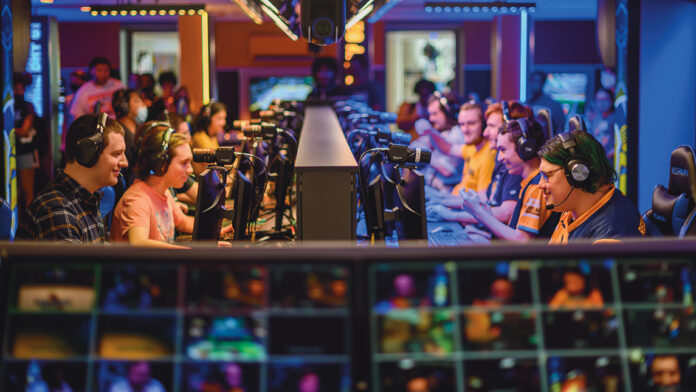 NC Trend: Universities tune in to the potential of esports

It seems every common word in the modern lexicon begins with an ‘I’ or an ‘E’, making esports inevitable.

With billions of dollars of revenue up for grabs, esports represent a tectonic shift in popular culture. Rabid fans are selling out arenas like Madison Square Garden in a matter of minutes and tuning in by the tens of millions every month on Twitch and YouTube to watch their favorite video game e-thletes and teams battle one another in rounds of Rocket League, League of Legends or Starcraft II.

Audiences watching other people gaming, as opposed to participating themselves, isn’t anything new. Ever watch a round of golf? Kids at arcades and bowling alleys in the 1970s gathered three deep to gawk at players asserting dominance over a pinball machine.

Through its university system, North Carolina is determined to take center stage for this burgeoning business.

In 2020, UNC Wilmington became first in the state with an esports certificate program. N.C. State University has the winningest collegiate team in the U.S. and received $16 million from state lawmakers earlier this year to build the nation’s biggest publicly financed esports facility. Construction on retrofitting an existing campus building is now under way.

Now, UNC Greensboro is swinging for the fences on this digital field of dreams.

This summer, the campus hosted four one-week esports and gaming summer camps for kids between nine and 14. In April, UNCG opened  a 3,300-square-foot esports center that features four enormous video walls and eight large-screen video panels connected to 48 PCs, a dozen of which are competitive platforms capable of live streaming.

“If you think of this as a startup, our investment has been time more than treasure,” Chancellor Franklin Gilliam Jr. says. “Partners including Chartwells and Pepsi helped us build the arena, while campus staff did the wiring.”

The Greensboro school wants to turn video gaming into a money-maker that attracts interest and students.

“It’s hard to talk about something when it’s in its infancy,” Gilliam says. “But I know when I see potential in something. Esports is a thing. It’s a risk and you have to be willing to take risks to win. So I live and die by a (NHL icon) Wayne Gretzky quote. His critics said, ‘You shoot the puck too much.’ And Gretzky said, ‘You miss 100% of the shots you don’t take.’ You can’t score if you don’t shoot.”

UNCG is “looking at esports from the event side and the event management side, understanding that there are nuances that we are just starting to comprehend,” says Eric Burns, associate athletic director of business operations.

The university’s Bryan School of Business offers a concentration in esports marketing, event planning and logistics as part of the hospitality and tourism management program. There’s also a grant for the School of Health and Human Sciences to examine the physical effects of extreme gaming on players.

“It’s been part of my challenge when I came here seven years ago, getting the campus to believe they are the best. I didn’t come here to be just OK,” Gilliam says.

When informed that a rival university requested a closer look at UNCG’s esports strategy, the chancellor chuckled. “My dad used to say, ‘dogs don’t bark at parked cars.’” ■