A giant insurer that manages medical billing for low-income patients places a huge bet on Charlotte.

Health insurer Centene promises as many as 6,000 jobs at its new East Coast headquarters in Charlotte, delivering the “transformative” project that North Carolina has been seeking for years.

The fact the development is occurring in one of the state’s hottest regions instead of a slower-growing area shouldn’t deter from one of the biggest jobs announcements in state history, says Tony Copeland, secretary of the N.C. Department of Commerce. To attract the Clayton, Mo.-based company, state and local governments offered about $450 million in incentives, mostly tied to adding about 2,600 jobs and investing an estimated $1 billion. Centene now employs 500 in the state. 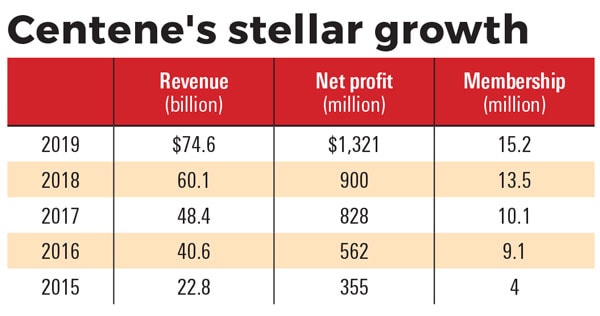 “The company clearly has confidence in North Carolina’s current and future economy and workforce despite the worst pandemic in memory,” Copeland says. “Don’t miss that they will have an annual payroll of $324 million [within five to 10 years] that will ripple through all socioeconomic levels of our state.”

Centene (pronounced “sen-teen”) said construction at the 80-acre undeveloped site near UNC Charlotte will begin in August. The first phase of construction is expected to be completed in the second half of 2022 and will accommodate about 3,200 employees. The next phase of construction will begin in 2024, and enable an additional 3,000 employees. Centene projects $110 billion in revenue in 2020, much of it from managing Medicaid insurance claims for state governments.

North Carolina beat York County, S.C., and Tampa, Fla., for the project. Even with the pandemic causing unemployment to surge, the state’s tally of new corporate job promises and investments is ahead of last year’s pace, Copeland says.

CEO Michael Neidorff has led Centene for 23 years as it became the fourth-largest U.S. health insurer and No. 42 on the Fortune 500. Shares have jumped 30-fold since a 2001 IPO. He praised North Carolina’s business environment in announcing the expansion, then blasted his company’s headquarters market of St. Louis. He told a local publication that the Missouri city needs to improve its business climate and curb national media perceptions of excessive crime. At 77, Neidorff is one of the oldest CEOs at a big U.S. public company. His employment contract runs through 2023, when he turns 80.

N.C. lawmakers approved a change in economic development policy two years ago to allow for larger incentive grants that were competitive with rival states. The oft-stated purpose was to attract a major auto plant to the state, mostly likely near the Triad area. North Carolina remains the sole Southern state without such a facility.

Along with IT, finance and other jobs, Centene will hire a significant number of customer service and claims-processing positions, says Frank Emory Jr., chairman of the Economic Development Partnership of North Carolina. “Some of those will be entry-level positions with opportunities for upskilling. So their hiring impact will have a broad reach.” Those jobs are likely to average more than $60,000 a year, while the overall average will be about $100,000, Centene says.