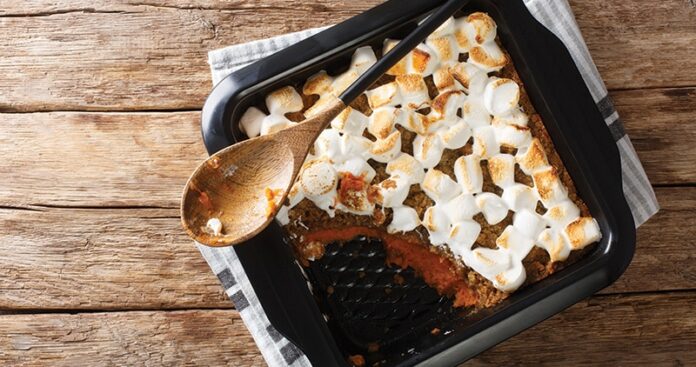 Turning sweet potatoes from a seasonal to a year-round product is a signature achievement of Tar Heel agriculture.

It is the holiday season, and many folks are thinking about Meemaw’s sweet potato recipe with the marshmallows. The sweet potatoes under the sugary goo likely come from North Carolina, the leading producer and home of an industry transformed in the last 20 years.

The dominance of North Carolina’s sweet potatoes is an example of what happens when different players — university researchers, farmers, processors and the N.C. Department of Agriculture and Consumer Services — work together to achieve a common goal.

Sweet potato production is a $350 million slice of North Carolina’s $92 billion agriculture industry, according to N.C. State University economist Daniel Tregeagle, an extension expert in specialty crops. It’s a profitable slice, with a net in the range of $1,000 an acre, compared with $100 to $200 for corn or soybeans, according to his estimates. Most are grown in Wilson, Johnston, Nash, Edgecombe and Sampson counties with acreage tripling since the late ’90s.

A few innovations have been key — the development of a sweet potato known as the Covington, storage technology improvements and something called micropropagation (a technique used to produce a larger number of identical plants), all part of research and development in the agriculture and life-sciences complex at N.C. State and N.C. Department of Agriculture research stations.

In the 1990s, North Carolina’s sweet potato growers were dissatisfied with inconsistent results from the then-dominant Beauregard variety. “The ones on one side of the road would look great and on the other side of the road wouldn‘t look very good,” says Jonathan Schultheis, an N.C. State professor.

University researchers found a possible solution from a breeding nursery at a research station in Clayton. The new sweet potato, known initially as NC98-608, was later named for Henry Covington, an N.C. State extension specialist who helped build the industry in the mid-20th century.

After a couple of years of trials, they knew they had something special. Covingtons were all nearly the same shape and size. They looked good, tasted good, yielded nicely, and stood up well to viruses and pests.

Today, 90% of the sweet potatoes grown in North Carolina are Covingtons. It has become very popular in Europe, the United Kingdom and the Netherlands. North Carolina sweet potato exports have soared to $150 million annually, versus about $1 million 20 years ago.

Getting sweet potatoes to market is a challenge. They have to be kept at a certain temperature and humidity or they can go bad. Historically, only 65% of harvested potatoes made it to packers, and production was seasonal.

Fortunately, the ingenuity of Mike Boyette, an N.C. State agricultural engineer, changed the story. In the late 1980s, he viewed a packing facility in California’s Central Valley that showed how to keep plums cool in the summer heat. He tested the concept after a farmer from Benson, Tony Johnson, offered a building to use for sweet potato storage. Boyette told him about fans that would keep cool air moving horizontally through containers all the way up to the ceiling and sensors linked to a PC that collected temperature and humidity data.

The system kept the sweet potatoes at the right temperature for months. If you had potatoes that kept for months, you could get sweet prices. Word spread quickly. “I was overrun by farmers interested in what we had done and how they could get a part of it,” Boyette says.

Today, North Carolina has 98% of the climate-controlled sweet potato storage nationally. “We took this seasonal crop and we turned it into a crop that was available year-round,” Boyette says.

Tobacco also helped build the sweet potato industry. Both are labor-intensive crops, and the same workforce that planted and harvested tobacco was available for sweet potatoes. Subsidies to halt tobacco production due to public health concerns helped finance much of the infrastructure needed to support the growth of sweet potatoes.

And farmers like the late Tony Johnson. “There ought to be a historical marker down there in Benson where that building was built,” Boyette says. ■