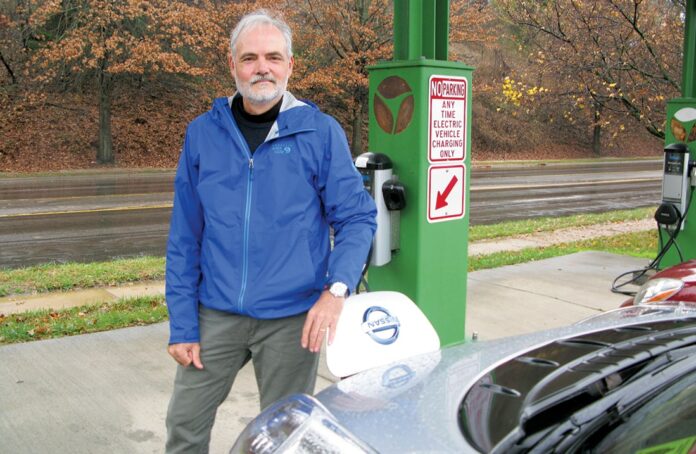 When Randy Talley drives up the Blue Ridge Parkway, he sometimes wonders whether he’ll have enough charge to make it home at night. Talley owns a Nissan Leaf, a plug-in electric vehicle with a range of about 90 miles on a single charge. It’s a fun ride, and he loves zipping around town in it, especially since an electric vehicle charging station is 400 yards from his office door. But a trip to the mountains, where charging stations are scarce, involves some risk. “The mainstream will comfortably buy EVs once they know high-speed charging stations are everywhere. Right now they’re not,” says Talley, co-owner of Asheville’s Green Sage Café. Between range anxiety and waiting for the next generation of electric cars to debut, Carolinians are way behind in EV purchases and adoption of charging stations. California has 174,000 electric cars on the road; North Carolina has 4,200, adding about 1,000 a year, according to Katie Drye, transportation manager of Raleigh-based nonprofit Advanced Energy. The state has about 600 public and private EV charging stations, mostly at workplaces in metro areas.

“North Carolina now ranks twelfth in charging stations, but that may be close to jumping up a few spots soon,” Drye says. State and federal governments are trying to jumpstart EV adoption and charging stations by encouraging businesses, including Duke Energy Corp., Siemens AG and SAS Institute Inc., to install stations for commuting employees. The N.C. Department of Transportation provides some grants for charging stations, but private-sector companies including NRG Energy, Nissan, BMW and Tesla are the leading installers, prepping for 2017 when more affordable cars capable of longer trips are expected to debut, Drye says. Tesla, with cars capable of going as far as 260 miles per charge, has more than 500 stations nationally, including five in North Carolina. They are available only to Tesla owners.

For an average Research Triangle Park commuter traveling 32 miles a day, an EV can accommodate 80% of their needs, she says. Most EV drivers recharge in their own garages, using stations for partial fill-ups. But long-distance travel requires predictable on-the-road charging or the use of hybrid gas-electric vehicles like the Toyota Prius.

By 2024, 7.4 million EVs are likely to be in service, with sales of charging equipment and services expected to top $1.6 billion annually, according to Boulder, Colo.-based Navigant Research Inc. Today’s leaders in charging stations will reap a bumper crop of customers, says Stan Cross, CEO of Asheville-based Brightfield Transportation Solutions Inc., which has installed 11 so-called “DC fast chargers” in North Carolina, each costing about $9,000. The 480-volt systems can add 50 to 70 miles of range in about 20 minutes of charging at a cost of $5.95 plus an additional 20 cents per minute. Smaller 208-volt chargers, which are more common, add 10 to 20 miles of range in about an hour, for about $1.50. Brightfield helps identify markets ready for the technology and studies proximity to amenities, highways and other stations. “The goal is to instill confidence in would-be EV buyers.”

Cross expects EV sales to soar over the next three years “as increased battery capacity across all EV brands doubles the range to 200 miles per charge and sales volume lowers the sticker price.”

Still, figuring out how to pay for the improving technology isn’t simple. “It’s not cheap to rip up a parking lot” to make space for stations, says Mike Waters, an EV guru at Duke Energy. At current prices, he says, “it costs you more to collect value from drivers than it does to offer it as a fringe benefit.”