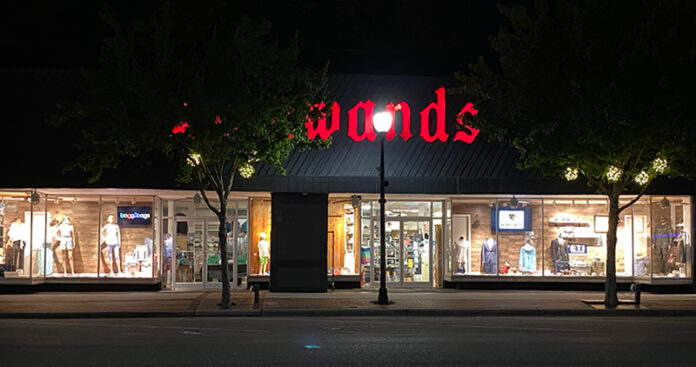 Love of community and changing with the times make Leinwand’s a rare small-town retailing success story.

Once staples of small towns throughout North Carolina, department stores have mostly disappeared because of competition from discounters or because succeeding generations wanted to do something else.

A rare survivor is Elizabethtown’s Leinwand’s, which still rings the register after 86 years. It continues to anchor a vibrant downtown in Bladen County because Ricky Leinwand, after graduating from UNC Chapel Hill in the mid-1970s, came home to help his father, Wallace, run the 6,000-square-foot store. That was a lucky break for Elizabethtown, which is on the Cape Fear River, eight miles from White Lake, a popular resort area since the early 20th century. A steady stream of lake visitors make their way to Leinwand’s in the summer.

Like his father and grandfather before him, Leinwand has been active in civic affairs as a longtime member of the community college board, a town council member, a booster of local teams and a leader in organizing good works.

The Leinwands’ story is a familiar one in rural eastern North Carolina. Jewish immigrants from Germany to the Russian Empire settled in places like Elizabethtown, Whiteville and Clinton in the 19th and early 20th centuries and opened stores. North Carolina’s population mostly lived in and around small towns, farming and working in mills.

Isaac Leinwand grew up in the Galicia region of the old Austro-Hungarian Empire and emigrated to the U.S. in 1907 when he was about 20. In the 1920s, he opened a store in Branchville, S.C., a little railroad town. Then the Depression hit, and “Granddaddy just lost everything” when the banks shut down, Ricky says.

Isaac had a brother in Whiteville who helped him start over again in Elizabethtown in 1935. Four years later, Isaac’s store burned down in a fire that might have consumed much of downtown Elizabethtown if fire companies from Lumberton, Whiteville and Fayetteville hadn’t arrived quickly.

“It’s a miracle we’re even in business,” Ricky says. But Leinwand’s reopened, and in 1947, Isaac’s son, Wallace — Ricky’s father — took over the business in a partnership with his wife, Shirley (just as Ricky and his wife, Eileen Silvers Leinwand, now run the store together).

He was typical of Jewish merchants in small eastern North Carolina towns — the Weinsteins in Lumberton, the Leders and Manns in Whiteville, the Baers in Dunn, the Sugars in St. Pauls, and the Kramers in Wallace. A 2007 study of eastern North Carolina Jewish families by Campbell University historian James Martin Sr. noted “wherever Jews went, their sense of civic obligation was very strong.”

Ricky has carried on the tradition as a member of the town council and as a leader in local Rotary, Optimist and Jaycee groups. He’s also been a radio broadcaster of local high school sports for more than
30 years. For decades, Leinwand’s has hosted a Christmas shopping trip for residents of the Boys & Girls Homes of North Carolina in nearby Lake Waccamaw.

“Instead of just keeping to ourselves and just hanging around Jewish people, we became mayors of our towns or [state] senators,” Ricky says. He cites mayors David Weinstein of Lumberton and Terry Mann of Whiteville. “We didn’t hide. We gave back to the community. The story is not just me and my family. It’s the story of Jewish people in the South.”

To carry on his family’s civic tradition, he had to stay in Elizabethtown. And he knew, when he graduated from UNC more than 45 years ago, that the family business needed to change.

The retail that he saw while attending UNC made an impression. “I saw all those nice stores in Chapel Hill — Julian’s, Milton’s, The Hub. And, I said, ‘Daddy, I really want to come back, but we need to upgrade our business.’

“I said, ‘We need to buy this $30 shirt, the Lacoste shirt, the alligator shirt.’ We were used to selling $14.95 shirts. He said, ‘Nobody in Bladen County’s gonna buy that. They can’t afford it.’ I said, ‘Well, maybe we can attract from Lumberton and Clinton and Fayetteville.’”

And that’s what they did. In the mid-’70s, nearly all of the store’s business was from Bladen County. Now, more than 80% of the volume comes from outside the county with the most business coming from neighboring Cumberland, Sampson, Columbus and Robeson counties.

“I still depend on my good old farmer,” Ricky says. “The farmers are my best customers. But these are not overall, dirt farmers anymore. They’re sophisticated master’s-degree-type farmers in the swine industry. And even though I’m Jewish and I don’t eat pork, we definitely support the swine industry.” Smithfield Foods employs more than 5,000 people at its Bladen County pork processing plant.

Leinwand’s has a digital enterprise, operated by his son, Michael, and uses social media to expand the reach of its business. “We just started this a year ago with the virus and everything going on,” Ricky says, noting that customers in 15 states have made online orders. “My son’s smart. I’m 68 years old. I don’t know much about that stuff.”

The store carries more than 300 brands, and shoppers found it online during the pandemic. In addition to apparel, Leinwand’s sells watches, sunglasses, bags and Yeti cooler products.

“People love our brands, and we get permission from the manufacturers to sell it online, and that’s what we do,” Ricky says. “It’s a very small part of our business right now, but we’re impressed by the fact that people are finding out about us in Oregon and Washington and California.”

He has been Mr. Ricky for years to young men who got their prom tuxes because Ricky came to their high school to take their order. That’s how he met Brent Underwood, one of many Bladen residents who have worked at the store in their teens. Underwood, who now tours the state with his band 87&Pine, says Leinwand’s was “extremely important to guys like me coming up. Mr. Ricky kind of told us how to dress.”

The store, Underwood says, is “Elizabethtown to me.”

When Elizabethtown native Larrell Murchison signed a $3.6 million, four-year contract with the Tennessee Titans last year, the former N.C. State University football star wanted to donate winter coats to local kids. His agent was ready to buy $5,000 to $10,000 in merchandise in the Raleigh area, but Murchison said to get it from Leinwand’s.

“And I said, ‘I’ll tell you what. I’ll go in half with him,’” Ricky says. “And we clothed about 40 kids.” He also put on a red N.C. State sweatshirt at Murchison’s request and posed for a picture with the 300-pound defensive lineman, who had visited the store since elementary school.

“I love my Tar Heels, but I also love my local people that have been successful,” Ricky says. ■

The Leinwand’s success in Elizabethtown was mirrored by the Brodys, another Jewish immigrant family that made a major mark on eastern North Carolina. According to a family history written by Harold Brody, the Brody Brothers Dry Goods Co. started as a small shoe store in Sumter, S.C., in 1917 and later became Brody’s Department Store. Founder Hyman Brody immigrated to the U.S. from Russia in 1906, followed seven years later by his wife and six children. Hyman and Bessie Brody later added four boys and a girl to the family.

Hyman’s brother Leo moved to Kinston in 1928 to start the second Brody’s Department Store, followed by one in Greenville in 1938. Brody’s later expanded with department stores in Rocky Mount, Goldsboro and New Bern before the business was sold to the Alcoa, Tenn.-based Proffitt’s chain in 1998.

Hyman’s son, Julius “Sammy” Brody, expanded the family’s holdings into radio and television broadcasting and a Coca-Cola distributorship. He also became a philanthropist, joining his father, brother Morris and other family members in helping establish the medical school at East Carolina University in Greenville with donations topping $22 million. In 1999, the school was named after the family.