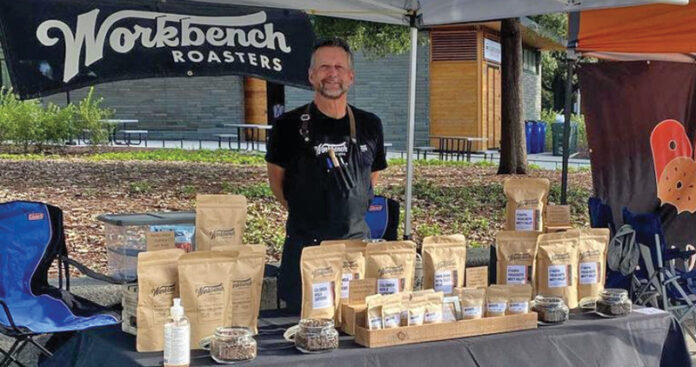 When Michael Carty started roasting coffee beans at home, he wasn’t looking to start a business. The former Ford Motor engineering supervisor had just retired in 2019 and moved from Michigan to Wendell in eastern Wake County, and searching for the perfect cup of coffee had become a hobby.

“My goal was to find the best flavored coffee bean I could, roast it myself, and be self-sufficient,” Carty says. But when he let neighbors and family try a few samples, they wanted more. He offered up his coffee beans for sale through a post in a neighborhood Facebook group, prompting orders within an hour. Only a few months after he’d roasted his first batch atop an old workbench in his garage, Workbench Roasters was born.

It was May 2020, and the COVID-19 pandemic meant people were making fewer trips to coffee shops and grocery stores. They were brewing their java at home, and Carty was willing to deliver freshly roasted beans to doorsteps.

Carty and his wife, Hedi, soon became a fixture at the Wen- dell Farmers Market, joining a couple of other coffee roasters selling beans on Saturday mornings. They’ve since added three other farmers markets in Raleigh and surrounding towns.

Small-batch coffee roasting businesses have percolated across North Carolina in recent years. Many roasters are part of coffee shops that sell beans to in-store customers and ship through a website. Others are smaller, home-based operations, selling to online customers and at farmers markets.

There’s no trade association for coffee roasters in North Carolina so it’s unclear exactly how many there are. A Google search turns up dozens of roasters, from Tribal Grounds Coffee near Cherokee to Chaos Coffee in coastal Bayboro.

In addition to the small-batch roasters, the state is home to roasteries with larger operations: Counter Culture Coffee in Durham, Dynamite Roasting in Black Mountain, Larry’s Beans in Raleigh and Magnolia Coffee in Charlotte.

Coffee drinkers, it seems, are willing to pay a little extra to buy local roasts rather than mass-produced beans. “People love to support local,” Michael Carty says. “At every market, we’re asked, ‘How did you get into this? And where do you do it? And how do you do it?’ There’s a lot of curiosity because people are so used to just going to the grocery store and pick- ing up a bag of coffee and not really understanding where it comes from.”

The Cartys bring along a container of raw green coffee beans to every event, as many people have never seen coffee in its original form. Workbench orders the beans from a distributor that sources them from growers in Central and South America, as well as Africa and Asia.

“When we get a new variety of bean, I’ll roast it at a light roast, a medium roast and a dark roast. We’ll cup those and see which ones we like the best — if any of them,” Michael Carty says. “We do a lot of experimenting and tasting.”

He keeps a spreadsheet detailing the perfect roasting process for each bean, citing time and temperature. It’s not as simple as locking in settings on a roasting machine and walking away. “I’m watching the color change,” he says. “I’m smelling the beans. When I do a dark roast, I’m looking at the smoke that’s coming off the beans.”

Carty can’t control the temperature inside his unair-conditioned garage, a seasonal fluctuation that can affect how a batch turns out. He’s building a “roast house” structure in his yard that will be climate-controlled. In an expansion push, he’s upgrading from a 3-pound roaster to one that can handle 10 pounds of beans at once. That will allow for a wholesale business, supplying beans to a local coffee shop.

But don’t look for Workbench coffee to land in your neighborhood grocery store. That would make quality control hard- er because unsold bags could go stale after sitting on shelves for months, he says.

Workbench delivers and ships coffee within 48 hours of roasting the beans with the Cartys dropping coffee on local doorsteps often within hours of roasting. “We control every aspect of it, 100%,” Michael Carty says. “I don’t want to grow to the point that we have to give that up.”

Workbench has partnered with Wendell’s Bearded Bee Brewing Co., which uses its beans to make its Bee-Rista Coffee Amber beer. The beans have also been used in coffee-scented soaps and coffee-flavored bagels.

When Carty wants a vacation, Workbench suspends production for a few days, notifying online customers that their order will be delayed. Carty doesn’t want to return to the 50- to 60-hour workweeks of his engineering days. “I’ve always said if we were 30 years old, I would have a different view on where I want this business to grow,” he says. “We have room to grow still … but it’s kind of the perfect retirement gig for us.”