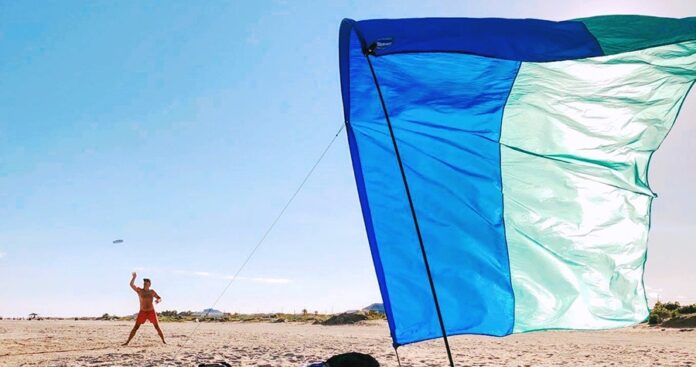 Three Chapel Hill grads create the Shibumi Shade, a design to beat the beach heat without the aggravations of umbrellas.

It’s a scorching hot day at the beach, and all you want to do is kick back with a cold beverage, relaxing with friends or family. One obstacle stands in the way: setting up the dreaded beach umbrella. You lug what feels like 100 pounds of gear across the burning sand, sweaty shirt sticking to your skin. Pulling out the massive metal and canvas beast, you begin what looks like a poorly produced semi-pro wrestling match, attempting to anchor the umbrella. More often than not, you give up, accepting the fate of returning from vacation looking like a well-done, sunburnt lobster.

That’s the unpleasant experience brothers Dane and Scott Barnes and their friend Alex Slater aimed to eliminate when they created the Shibumi Shade prototype in 2015. The UNC Chapel Hill grads spent summers at Emerald Isle Beach, often experiencing the frustrations of dealing with traditional beach umbrellas and tents.

“We took a little inspiration from different things like looking at a sheet on a clothesline just sort of flowing in the breeze,” Slater says. “And understanding that working with the wind, rather than trying to fight against the wind, seemed to be the best way to solve that problem on the beach, since wind is usually the biggest problem out there. So we made our first prototype by buying fabric … and using a sewing machine and buying some PVC pipe at a hardware store, and putting together the very first version of a Shibumi Shade.”

The tunnel-like design of the shade caught other beachgoers’ attention, and the Winston-Salem natives were soon getting requests to buy the shade.

“We realized, OK, other people are actually pretty interested in this,” Slater says. “Maybe we should take this idea and turn it into a business.”

The idea took off, and the Barnes brothers and Slater began selling the shade in 2016. With no experience in engineering or sewing, creating the perfect design was a challenge for the trio, who were math, business and English majors, respectively.

“Even learning how to thread the sewing machine was a pretty big challenge at first,” Slater laughs. “But we figured it out, and we essentially taught ourselves to sew and just went from there.”

Weighing less than 4 pounds, the beach umbrella-alternative boasts an easy setup and take down, with a three-minute assembly time. Segments form one long pole held together with a bungee cord. Beachgoers thread the lightweight UPF 30 sun protection canopy onto the pole and secure each end in the sand at an angle. The carrying case can be filled with sand and is used as an anchor to secure the canopy at the apex of the arch, providing a counterweight to the force of the “drag” created by the wind passing through the canopy and preventing the shade from taking off like a kite. The Shibumi Shade can withstand wind speeds as high as 30 mph.

“It’s really lightweight so anyone in your family can carry it, from a young child to an older adult,” Scott says. As many as six adults can sit comfortably under the shade. “And because it works with the wind and not against it, it can’t have the same kind of danger of umbrellas and tents that you see on the beach that can get picked up by high winds and tumble down the beach. So it’s a little safer.”

The founders say that customers have self-reported taking a Shibumi Shade to more than 500 different beaches across the world, including up and down North Carolina’s coast.

With an influx of orders, the Shibumi Shade, which retails for $250, was on backorder on the company’s website as of mid-September with an estimated shipping date of Oct. 31. The shade is also temporarily sold out at 22 East Coast retail stores that carry the product. The trio did not disclose financial details.

The founders, who operate the business out of Raleigh, have contracted production to two manufacturing facilities in Asheboro and near Asheville and employ a Raleigh-based warehouse distributor. “For us, it’s really important and special to have every Shibumi Shade sewn in North Carolina,” Scott says.

Not every beach welcomes the shade. Ocean Isle Beach allows only traditional umbrellas with a single pole. Myrtle Beach, which sees as many as 14 million visitors annually, prohibits anything besides traditional umbrellas from Memorial Day to Labor Day. Scott says they hope that Ocean Isle Beach and Myrtle Beach town governments will look at the current regulations and reconsider safe alternative tent options such as the Shibumi Shade.

“The amazing thing has been [customers] that write back to us just absolutely up in arms, and they go to the next town council meeting, and they advocate our case, which has just been incredible [to hear] that kind of support and feedback.”

Everyone wants to know about the name, of course. The three founders grin because the phrase perfectly defines the company.

“Shibumi is a Japanese design concept that means elegance of simplicity,” Dane says. “It was also the name of a really, really small apartment complex that Scott, Alex and I lived in at Chapel Hill. It was a common thread between us, so it has a fun double meaning.”

In the company’s infancy, the founders maintained full-time jobs at online software and marketing companies while running Shibumi. But last fall, they took the leap to pursue the business full time.

Scott says starting a beach shade company was never meant to be a life pursuit. When the product’s popularity skyrocketed, “we started to realize that we had an opportunity to do something we really believed in with [me], my brother and best friend, which is a once-in-a-lifetime kind of opportunity. I was never in college studying math, [thinking] that entrepreneurship was my plan or path. But the way that the hand was dealt, it became a no-brainer.” ■